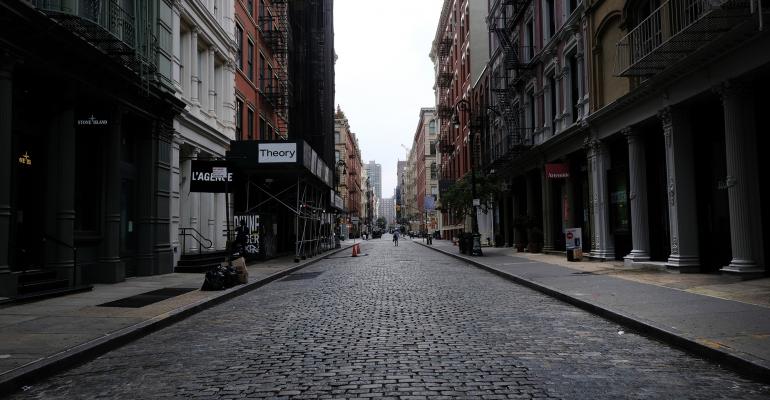 NYC’s Virus Threat Has Faded, But Its Future Is Stuck in Limbo

New York’s rate of positive Covid-19 tests fell to the lowest since the pandemic began last week. Yet tourism is down, crime is up and as many as a third of the city’s small businesses may never reopen.

(Bloomberg)—Editor’s Note: No city is more important to America’s economy than New York, and none has been hit harder by the coronavirus. “NYC Reopens” examines life in the capital of capitalism as the city takes its first halting steps toward a new normal.

Begin in the East 80s, off Madison: waiters in surgical masks hand out sanitized menus to the regulars dining al fresco.

Across town, in the West 70s, the sirens have yielded to the familiar clang of jackhammers. In Central Park, the zoo, the playgrounds, even the carousel have reopened. Soon, schools across the city will too, but not fully.

Squint, and you can see it: New York, once the epicenter of the nation’s coronavirus outbreak, is grasping for some semblance of its old self. Five eternal months after the lockdown began, office workers have started to trickle back to midtown. A fraction of the suburban commuters are braving the Metro-North lines. Wall Street is roaring, though still mostly working from home.

And yet. In this August of the pandemic, boarded shopfronts and forsaken side streets point to a somber conclusion: a real recovery still hinges on the virus, which has killed more than 20,000 New Yorkers.

The numbers show a city caught in limbo. Just last week, its rate of positive Covid-19 tests fell to the lowest since the pandemic began. Yet ridership on the subway is still down by three-quarters versus last year, and the drop has been just as big on the Metro-North and Long Island Railroad. Tourism is down, crime is up and as many as a third of the city’s 230,000 small businesses may never reopen.

And thousands of New Yorkers, especially the wealthy, have departed the city — an exodus even Governor Andrew Cuomo frets will become permanent if Covid-19 drags on. The situation has led more and more people to wonder out loud whether New York City is “over.”

“It’s not the city we knew six months ago,” said Rafael Llopiz.

Llopiz, who heads a trade group for the city’s parking garages, says people aren’t in hurry to come back. In some areas, business from monthly customers is down by as much as 80%. Llopiz himself has spent most of the summer at his second home in the Hamptons. These days, it takes half the time to drive into Manhattan. The other week, driving down Fifth Avenue to his SoHo apartment, he said he hit all green lights in sequence.

Among the biggest roadblocks to New York’s recovery is the question of school reopenings. After months of heated debate in the city and elsewhere, Cuomo said on Aug. 7 that he’d authorized the state’s school districts — including New York City, the nation’s largest with 1.1 million students — to begin in-person classes this fall. Under the city’s plan, students will be in classrooms between one and three days a week. Yet with New York City public schools facing deep budget cuts and potential shortages of everything from teachers to nurses and protective equipment, many still have deep misgivings.

Earlier this month, mask-clad teachers and others marched in protest through Lower Manhattan, and the president of the city’s largest teachers union has said its members are ready to strike if their safety demands aren’t met.

All the while, a few blocks away, Wall Street has recovered quickly since markets plummeted in mid-March. On Aug. 12, the S&P 500 surpassed its previous record from February, going from trough to peak in just 175 days. The nation’s biggest investment banks and tech giants have all reported strong quarterly results in recent weeks.

Elsewhere it’s less upbeat. A report from Partnership for New York City estimated the city had lost as many as 900,000 jobs by late June. Several large retailers, like J.C. Penney and Lord & Taylor, have filed for bankruptcy, and New York-based Macy’s Inc. is cutting thousands of corporate jobs. Neiman Marcus said it will close its three-story store in Hudson Yards, just 16 months after it opened. Foot traffic on Fifth Avenue is a fraction of its normal level.

Many restaurants, including posh Eleven Madison Park, have shut their doors. Others are hanging on by turning sidewalks and streets into European-style dining areas as part of the city’s popular outdoor dining program.

But even that has brought headaches for already hard-pressed owners, like John Clement of Clem’s, a bar in Williamsburg. This summer, videos of crowds congregated in the streets outside restaurants went viral, prompting Cuomo to threaten to shut down venues and fine patrons. The result, according to Clement, is an ever-changing and ever-expanding list of rules, and heavy-handed enforcement.

This month, Clem’s was written up for allegedly pouring drinks without also serving food — a no-no that Clement denies. He said the inspector simply showed up after the patrons had already finished eating. Now he’s expecting a fine in the thousands of dollars. Clement is also worried about the winter, since the program is set to end on Halloween and won’t restart until June.

“The food and beverage industry is one of the only economic engines left moving forward,” he said, sipping a Kolsch. “I just don’t understand why they are picking on us so hard.”

Joel Lee Kulp, who runs The Richardson, just east of McCarren Park, said Clement’s experience made him question how his own food options jibe with the governor’s mandates, which say potato chips don’t count as food, but an ice cream sundae does.

Many Richardson patrons order a few small tapas, like olives, canned sardines and potted chicken-liver mousse. Kulp worries whether it will pass muster. “It’s a meal in Spain,” he said, “but is it a meal in Albany?”

Back in Manhattan, Charlotte St. Martin, president of the Broadway League, is grappling with an equally uncomfortable reality. Five months ago, the Theatre District shuttered after an actor got the virus. In all, 23 of the show’s 27-person cast ended up getting sick, she said, although they’ve all recovered. The shutdown, which lasts through year-end, has put almost 100,000 jobs in danger.

“It’s in the blood of the people who work on Broadway that the show must go on,” St. Martin said. “We were hoping there would be some magic bullet or medical treatment, and we would have opened, but that didn’t happen.”

St. Martin has stayed home, on Fifth Avenue near the Metropolitan Museum of Art, throughout the pandemic. Lots of her professional contacts have left, but she’s hopeful they’ll return.

On the Upper East Side, Christina Roden is less chipper about the immediate future. Sure, the city will endure Covid-19, just as it persisted through its near collapse in the ’70s, AIDS, 9/11 and more recently, Hurricane Sandy. But the 69-year-old writer and dog trainer said the reopening has lulled too many into a false sense of security, making them too cavalier about the deadly virus.

Like many New Yorkers, she’s lost most her income and fallen behind on rent. She routinely clashes with other residents who don’t wear masks and has nothing but harsh words for President Donald Trump. As for those who ran for the suburbs as soon as the pandemic struck? Well, good riddance.

“Die-hard New Yorkers are not going to leave,” she said. “The people that are leaving are those who probably would have left anyway. I don’t think we’ll miss them.”

-With assistance from Amanda L Gordon.

To contact the author of this story: Anders Melin in New York at [email protected]