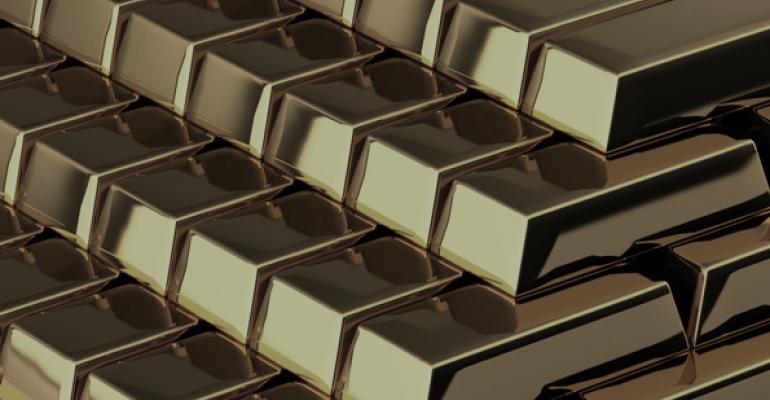 There are myriad ways to play the continuing downtrend in the price of gold. Which is best?

We got a lot of blowback from gold aficionados about last June’s interview with Yoni Jacobs, the executive director and chief investment strategist of Chart Prophet LLC. His 2012 book, Gold Bubble: Profiting From Gold’s Impending Collapse, was a deadly accurate forecast of a speculative peak in bullion.

In our interview, Jacobs expanded on his book’s theme that gold would fall sharply if support at $1,600-$1,500 was broken, even given an intervening spike to the upside. Indeed, gold rallied to just short of $1,800 in September before falling back. In April it broke through $1,600 and dropped $250 in just eight trading sessions. By the end of June, bullion was changing hands near $1,200.

His long-term prediction? $700. “I think we have absolutely confirmed an all-time peak. Though gold may find support at $1,200 or $1,000—a big psychological number—it will ultimately fail again and fall.” 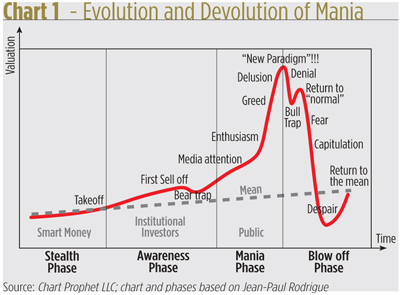 These investments returned disparate results and presented vastly different levels of risk, but all made money. As there still may be room left in the short gold trade, it’s worth a look at the year-over-year performance of Jacobs’ strategies.

Short Comex Gold Futures: There’s a beautiful symmetry in futures. Unlike securities, every trade, short or long, is done on margin.There’s plenty of leverage on either side, too. If you had a futures account (regulations prevent you from trading futures in a securities account), you could have followed Jacobs’ advice into the commodity pits.

Futures are short-lived contracts. Each calls for delivery of the underlying commodity in a specific month if the contract isn’t offset with a closing purchase or sale. To hold a position indefinitely, you have to roll out of a soon-to-expire contract and into a later delivery month.

A year-long position in the most active gold contracts could have been undertaken with two forward rolls. Depending upon how much collateral you deposited, you may have had to weather a few intervening margin calls as well. Recall that Jacobs’ predicted a price spike before gold declined in earnest. That could have made your short position costly at the outset.

As a short seller, you would have countenanced unlimited risk above your entry price but enduring the near-term pain could have paid off handsomely with a 421 percent return on margin (posting the exchange’s minimum performance bond would have given you 18-fold leverage).

Like futures, options have short fuses. Or, more properly, most have short fuses.There’s a species of contracts known as LEAPS—Long-term Equity AnticiPation Securities—that can be maintained for as long as three years. Like conventional options, LEAPS are offered as puts or calls.

In June 2012, an at-the-money GDX put, expiring in January 2014, could have been purchased for about $8 a share. “At-the-money” simply means the contract’s exercise price was approximately the same as GDX’s market value—then $45. That afforded buyers—who reserved the right to sell GDX at $45 no matter what the shares’ actual worth—6-to-1 leverage.

Since then GDX’s market price has been halved and the put’s value is up nearly threefold. All this comes with no margin requirement and no risk beyond the original premium paid.

Short GDX: Selling short gold miners’ shares is a simple way to profit from the decline. “Leadership turnover, unhappy shareholders, rising mining costs, worker strikes and large debt loads are weighing on gold mining companies,” says Jacobs. “I expect that the sharp fall in gold prices and the continued pressure in the gold space will ultimately result in massive upheaval and a number of bankruptcies.”

A short sale of the GDX fund last year would have allowed you to bet against 29 producers in a single wager. Regulation T would have limited you to 200 percent leverage and, again, you would have undertaken open-ended risk to the upside. Like the short futures trade, there would have been margin call exposure in the fall of 2012, depending upon your account’s credit balance. And, since you would have used borrowed shares, you would have been liable to the lender for any dividends. If the shares had become hard to borrow, they would have also been subject to recall.

The one-year payback for all that risk? Better than 100 percent.

There were other ways to play a gold swoon that weren’t laid out in the initial Jacobs interview. These should be weighed against the tactics we’ve already profiled if you decide to ride the gold bear going forward.

Short GLD: You don’t have to go to thefutures market to make a direct bet on bullion’s price. You can short the SPDR Gold Shares Trust (NYSE Arca: GLD). Since GLD is backed by physical metal, it’s a proxy for bullion. The market is deep and liquid, making shares easy to borrow. Since GLD is a security, Regulation T caps your leverage at a much lower level than futures. Over the past year this would have yielded a margin-aided 46 percent return.

Long DGZ: Short exposure to gold doesn’t necessarily require margin. The PowerShares DB Gold Short ETN (NYSE Arca: DGZ), for example, is an exchange-traded note that tracks the value of a short Comex futures position. The note’s unmargined return over the past year would have been 25 percent. That’s a bit more than half the levered return of the GLD short sale. The premium comes from the positive roll yields and T-bill interest in the futures position emulated by DGZ’s underlying index.

Like other exchange-traded notes, DGZ conveys credit risk to buyers. The notes are issued by the London branch of Deutsche Bank, which was just downgraded by Standard & Poor’s from an “A+” to an “A” rating. Further impairment could cause the notes to trade at a discount to their indicative value. If DB goes bust, these unsecured obligations could conceivably become worthless.

Long DZZ: If the risk of a bank blowout doesn’t scare you, you can amp up your short gold exposure through another DB-issued note. The PowerShares DB Gold Double Short ETN (NYSE Arca: DZZ) gives you a twice-over dose of futures. DZZ’s 54-percent return over the past 12 months betters that of a short GLD position, yet another reflection of the roll gains and collateral interest obtained in a nominal short futures trade.

There’s limited risk when buying DGZ or DZZ though, more properly, your risk is constrained to 100 percent of your purchase price. That’s a posture akin to an option purchase, albeit less levered. Unlike a put, however, these bearish notes can be held indefinitely.

“I recommended the double-short gold ETN as one of the choices in my book,” says Jacobs, “but I still would rather just short gold through GLD, GDX or options. I don’t like leveraged ETFs because of the fee structure and weaker pure correlation to gold prices.”

Long DUST: The cost to lever Jacobs’ favored gold miners play wouldn’t have been that great last year. The Direxion Daily Gold Miners Bear 3X Shares (NYSE Arca: DUST) rose an astonishing 260% in the past 12 months while trading on respectable volumes. Like GDX, DUST tracks the NYSE Arca Gold Miners Index. In fact, DUST obtains its exposure by holding GDX and GDX swaps. DUST aims to deliver a threefold and inverse return of its underlying assets’ daily performance. DUST’s annual expense is 95 basis points (.95 percent), not quite twice that of GDX. 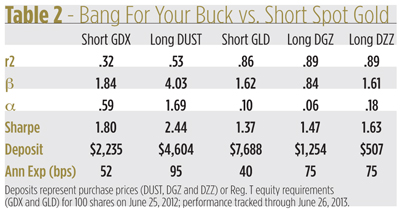 “The opportunities for shorting are no longer as appealing as they were, so anyone looking to short has to time it right in order to profit,“ Jacobs says. Still he remains confident. “Now that the bubble has officially popped,” he says, “gold is a broken trade.”