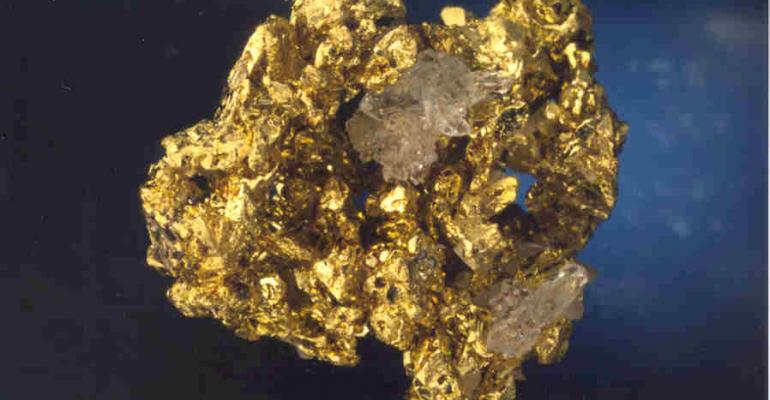 All That Glitters, May Not Glitter For Long

Many market observers, most notably Fed Chair Ben Bernanke, have admitted being puzzled by the vigor of a decade-long gold rally. If you’re perplexed too, don’t worry. One analyst hopes to draw the scales from your eyes, if only you’d read his new book.

Yoni Jacobs, executive director and chief investment strategist of New York-based Chart Prophet LLC, is certain gold’s bubble is set to pop, if it hasn’t already done so. REP.’s  Alternative Investment Editor Brad Zigler caught up with Jacobs to talk about the bust-up of the yellow metal’s speculative fervor.

Brad Zigler: Your book’s entitled Gold Bubble: Profiting From Gold’s Impending Collapse. Can you summarize your thesis? Why is bullion headed south?

Yoni Jacobs: The ballooning of gold’s price is similar to most asset bubbles that end up collapsing on investors. In addition to the parabolic price increases which have skyrocketed gold over 600 percent from 1999 to 2011, the signs of a bubble include rampant overspeculation, massive publicity and extreme expectations. Not only is the price rise very steep and unsustainable, but investor enthusiasm has likely already reached a peak–-signaled by massive risk-taking, lagging mining shares, slowing momentum, widespread media coverage and smart-money selling. There’s been over speculation in gold, to the point where “We Buy Gold” stores now line busy intersections and gold miners have quit hedging. Vending machines dispensing gold bars have been introduced, a Chinese taxi company has attempted to buy a mine, and a ridiculous asteroid-mining company expects profitability by harvesting orbital metal. Expectations of gold as a safe haven are tremendously misleading. Gold is an illusion of certainty in an uncertain world.

BZ: You're a Chartered Market Technician and the chief investment strategist for Chart Prophet LLC, therefore, an obvious believer in technical analysis. Was it gold’s chart that first got you thinking of a bubble? What’s your process for developing an investment idea—technicals first, then look for supporting fundamentals? Or is it the other way around?

YJ: I am definitely a believer in technical analysis because it is the number-one way to quantify risk, establish critical entry and exit levels to predict trends. However, I also know the importance of a well-rounded investment approach. At Chart Prophet, we look at all sides of an argument and all the catalysts that affect our investments. Even though we apply a heavy dose of technical analysis, we employ what we call a “Triple-Perspective.”  We look at technical, fundamental and behavioral factors to understand the economy and stocks and to make the most educated investment decisions.

Technicals help us most in terms of concrete price predictions and risk assessment, but we look for our analysis to agree on multiple levels over a wide range of data. Fundamentals tell us the story, investor behavior tells us what people are expecting and when they may be irrational. Finally, technicals tell us when exactly to buy or sell.

Gold has been showing signs of a bubble on all fronts: the fundamentals are already priced in and actually becoming unfavorable as global economies slow down and inflation loses steam. Investor behavior is extremely speculative and is setting up for massive disappointment. Technicals are showing a huge upcoming drop and a top that may, in fact, already be in.

BZ: Further along that line, what’s the relative weighting of technical and fundamental analysis in your picks?

YJ: I look at all available information and therefore consider all technical and fundamental data. However, when it comes to decisive data, I lean much more toward technicals. Without technicals you can’t make objective judgments or projections of price movement; with technicals, you can find important price levels, see what investors may be thinking and also pre-determine your risk. I want both the fundamentals and the technicals to agree, but if they conflict I trust the technicals. I’d say my weighting is 70 percent to 30 percent in favor of the charts.

YJ: My analysis points to a growing threat of recession. With an emerging market slowdown—keep in mind that China and Brazil have seen their stock markets down 30 percent—together with the European banking crisis, Middle East upheavals and massive unsustainable debt, growth in the global economy will slow. In turn, prices for goods will decline. Most, if not all, assets and commodities are likely to fall in this deflationary scenario. The U.S. dollar, as a consequence, will get stronger as its purchasing power increases against other currencies. The global slowdown, falling asset prices, and stronger dollar all are bad news for gold. My analysis also shows that gold can fall in an economic recovery as investors buy stocks instead of bullion and no longer need gold as a fear hedge.

When it comes to Elliott Wave Theory, I greatly respect its ability to figure out market sentiment and long-term trends. I use Elliott Waves for predicting trend reversals and projecting future price movements. However, I first employ strong fundamental, technical, and behavioral analysis. Once I decide on the future direction of a market or stock, I try to use an Elliott wave count to predict our exact location within the cycle. The Elliot Wave Theory fits perfectly with my analysis of gold, and helps us understand the future of the U.S. dollar.

BZ: When it comes to the notion of a gold bubble, as you know, there are a fair number of doubters. Some are vehement gold bugs, to be sure, but there are also investors simply agnostic about technical analysis. What do you say to those who discount the charts?

YJ: Many investors consider it voodoo or nonsense. However, technical analysis is based on supply/demand factors and investor behavior. People invest in a specific stock or commodity hoping its price goes up or down. What better way to predict future prices than actually studying price movement? That’s exactly what technical analysis does. I know that many people still want more tangible, concrete data than chart analysis. I therefore support all of my claims with fundamental and behavioral proofs too. Gold is a bubble on all three fronts.

BZ: When writing your book early last year, you used a Fibonacci number sequence to divine a probable top for gold between July and October 2011. As it turns out, Comex spot peaked above $1,900 last September and hasn't mounted a successful upside challenge since.

YJ: Isn’t it crazy how accurate the Fibonacci number sequences are? The July-October target date for a potential top came up by applying this well-known mathematical progression to the pivotal dates in gold’s history since 1968.

Though I don’t count out a new high yet—we still could see a final parabolic rise before a crash—it’s more likely that we’ve already peaked and are about to suffer the sharpest fall seen so far. We’re already seeing gold failing as a fear hedge. It’s fallen together with other markets recently. Slowing emerging market demand points to falling prices while the U.S. dollar is strengthening. That threatens gold’s continued run. The big gold bulls are beginning to doubt themselves, so the downtrend looks like it’s about to pick up steam as panicked investors rush out. With massive downside selling volume since September 2011 and investors beginning to realize gold is not a safe haven, we’re likely entering the crash phase. If gold can break below $1,600 and $1,500, it could fall sharply.

BZ: You've used Elliott principles to forecast a price objective for gold's collapse. Can you expound on that? Where do you think gold will bottom and when?

YJ: Asset bubbles tend to collapse back down to their beginning level. The current gold bubble, one that began to inflate in 1999, is actually part of a larger bubble that started in 1968. Prices rose from $250 an ounce in 1999 to over $1,900 an ounce in 2011—a 600 percent gain. As the bubble collapses and prices fall, that uptrend will be wiped out as prices fall back down toward 1999 levels. We’ve had some inflation and demand to support gold prices, but there’s not really much support beyond $700.

As selling pressure mounts and investors sell their gold, a panic will materialize causing  gold prices 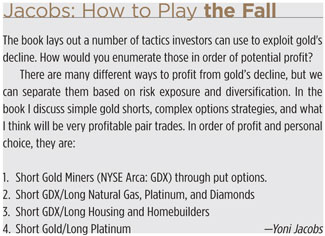 to plummet further. The collapse of the bubble will occur in bursts of falling prices, so it could take some time for the bear market in gold to play out. The last bear market in gold lasted 19 years -- from the 1980 top to the 1999 bottom. Whether the approaching bear market is fairly rapid or more drawn out, one thing is clear: Gold is in a bubble that has likely burs. If we’ve reached the top, the trend is down. We may see some countertrend rallies, but gold will officially be on its way down.

The support levels I’m watching are $1,400 and $1,500, where we saw a lot of action, the very important $1,000 psychological level and $700 which is my long-term target based on average prices, previous support, and wave counts. There may be ups and downs, but money will be made shorting gold. Still, gold will likely not set a long-term bottom for a number of years.

BZ: Your book chides gold bugs who claim that bullion benefits from both inflation and deflation. But you present a dichotomy of thought, too, when you say that rising or falling stocks could lay the groundwork for a gold decline. How is the premise for the gold bug argument faulty, but not yours?

YJ: The problem is that gold is a commodity, not a currency. Since we see asset prices fall in deflationary periods, gold, too, will likely fall in a recession. Gold bugs may be right that inflation benefits gold, but we haven’t seen any real threat of that. The inflation they expect will likely not materialize.

I chided the gold bugs because there is no way that both inflation and deflation will materialize—only one scenario will take place over the next few years. Since so many investors bought gold out of fear of one or the other, there’ll be a lot of them proven wrong because they chose the incorrect scenario. Gold will decline if the economy falls to deflation. On the other hand, if inflation takes hold, stocks will probably rise and attract investors away from gold.

In other words, it looks like gold will lose in either scenario. It will either lag behind stocks or will fall together with them. The premise for my argument is this: since gold is in a speculative bubble, it has much more downside than less speculative assets. To appease all investors, gold bugs need both scenarios to play out. I just need one. A number of different circumstances or shocks can pop gold’s bubble. To keep a bubble inflated, everything needs to go right; to burst a bubble, only one thing needs to wrong.