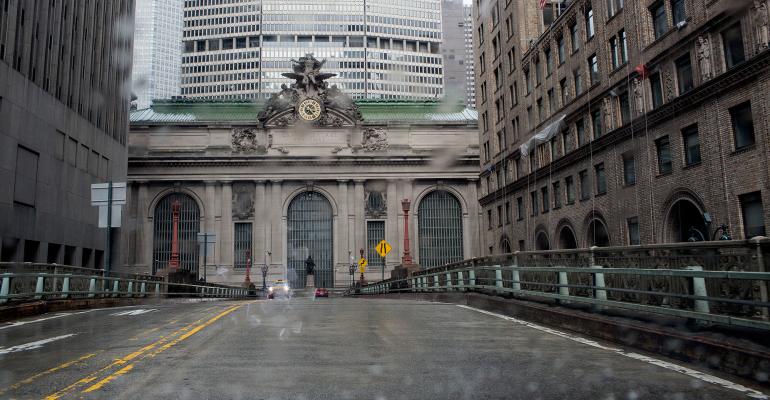 COVID-19 will pass eventually. The question is how large of an exodus cities will suffer, and how long it will last.

(Bloomberg Opinion) -- Big cities are taking a big hit from the coronavirus pandemic. Statistics from employment search giant Indeed show that major U.S. metropolitan areas have lost a larger percentage of jobs, and have experienced greater rises in unemployment, than smaller metros. Especially hard-hit have been so-called superstar cities such as San Francisco, New York and Seattle:

Housing markets tell the same story. Rents in superstar cities have plunged, often by double-digit percentages. This is due in part to the reduced ability of residents to pay, but also because of wealthy people fleeing cities like San Francisco and Manhattan for (literally) greener pastures.

Much of this, of course, is due to the pandemic itself. The well-off decamping for safety of the countryside to escape disease is nothing new -- accounts written centuries ago describe a similar phenomenon. Though studies show that overcrowded living conditions rather than population density is the culprit for the disease’s spread but some would rather be safe than sorry. Covid-19 has also forced or allowed many white-collar workers to do their jobs remotely while rendering impossible many of the joys of city life.

But Covid will pass into memory eventually. The question is how large of an exodus cities will suffer, and how long it will last. Urbanist Richard Florida notes that cities have survived much worse pandemics in the past, and continued to grow and thrive. Analysts point out that most residents are not yet moving out of urban centers; some hope that the departure of the rich will allow a more egalitarian form of urbanism in the future. Covid-19, by itself, doesn’t seem powerful enough to derail the remarkable urban renaissance that the U.S. has enjoyed since the 1990s.

Complacent triumphalism about the enduring appeal of cities should be avoided, however. Cities don’t always grow. From about 1950 through 1980, for example, the population of New York City fell. Many big U.S. cities lost people in the mid-20th century, with the 1970s seeing particularly rapid outflow.

The question is whether something similar might happen again. The answer will depend on the economics of why cities exist in the first place. Basically, there are three reasons human beings cluster in large population centers: Production, consumption and public goods. Each of these could be under threat, not just from the pandemic, but from longer-term trends that predate coronavirus.

Cities are enormously productive. They let employers locate near their employees and sellers locate close to customers. Big pools of workers, employers and financiers reinforce each other, making it easier to do business. And the flow of employees between companies, as well as casual interaction, circulate the knowledge and ideas that allow high-value industries to thrive.

But remote interaction negates much of this productivity advantage. If job searches and funding searches can be conducted just as easily online as in person, and if offices can be replaced with Zoom and Slack, much of the reason for cities to exist will evaporate. That’s a big “if,” of course -- many have predicted that cities would decline due to teleworking technologies in the past, but it has never materialized. Still, the pandemic, by forcing knowledge industries to go remote, may force companies, workers and financiers to realize that telework tools have reached a critical level of effectiveness. If so, that will weaken superstar cities’ productivity advantage.

People also live in cities for consumption; it’s easier to meet new people and find fun things to do in Manhattan than in a small town upstate. But as software makes it easier to connect with people without meeting in physical space, this advantage may erode as well. It’s probably easier to meet your future spouse on a dating app while living in the suburbs than it was to meet them in an urban bar 30 years ago. Social networks hold the potential to connect groups of friends in low-density areas, which may only need a minimum of local gathering places to feel vibrant. Thanks to the internet, the ‘burbs might be fun now.

Crime is another potential factor. Violent crime plunged in U.S. cities beginning in the early 1990s, but homicides have spiked this year, for reasons that are not yet well-understood. If the rise in violence proves as durable as the one in the 1970s, it could deter people from city life once again.

Finally, people live in cities because it’s cheaper to provide many public goods such as roads, transit, utilities, sewage treatment and so on when people are clustered. But during the past decade or so, politically powerful homeowners have limited the amount of housing and transit that can be built in many superstar cities, leading to falling affordability and dysfunctional transportation systems.

This latter might be the most powerful anti-urban force of all. Even before Covid, so-called NIMBYism was already choking off the growth of leading cities, limiting all of the positive effects listed above. Suburbs might still be somewhat more boring and less productive than big cities even with the rise of online interaction, but the rent is much cheaper.

It’s still too early to tell whether the rise of telework, social networking, violence and NIMBYism will be enough to push Americans back to the suburbs en masse. But nowhere is it written into economic law that big cities must always prosper and grow. Given the uncertainty, cities should act to shore up their weaknesses before they find themselves facing an evaporation of their tax bases.

To contact the author of this story:
Noah Smith at [email protected]oomberg.net