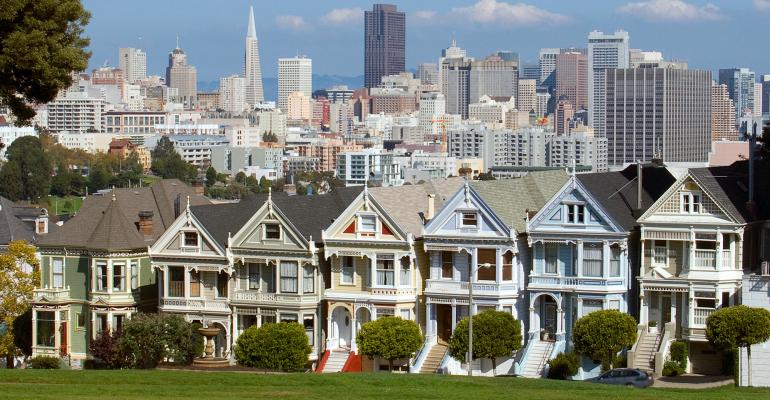 A collapse in nominal rents would have been far worse because prices for some goods and services are often sticky on the downside.

(Bloomberg Opinion)—It’s painful when prices are soaring for everything, but there are at least two segments of the real estate market where inflation may actually be easing the transition to a new status quo.

As the U.S. embarks on its third year following the arrival of Covid-19, there are clear winners and losers arising from how the pandemic has changed the ways we live. One big loser has been residential real estate in high-cost communities as people have taken advantage of remote work to flee dense urban centers and move to lower-cost places. The second loser, also stemming from the remote-work phenomenon, has been office buildings as employers and workers wrestle with what the future of work will look like.

There’s no need, however, to brace for surging vacancy rates, debt defaults and bankruptcies on the scale we saw in the aftermath of the 2008 recession. And for that, we can thank inflation.

To understand why, start with the apartment market. According to Apartment List, several Sun Belt metro areas including Tampa, Phoenix and Miami have seen rents rise by more than 30% since March 2020. Meanwhile, two metros still have rents below March 2020 levels: San Francisco and San Jose, California. Other high-cost coastal markets like Washington, Boston and Seattle have seen rents rise in merely the single digits over the past two years. (New York City is an exception here, as it has seen a robust rebound in apartment demand.)

But that’s in nominal dollars. The measure of Consumer Price Inflation that strips out the volatile food and energy components has risen 8.2% since March 2020, meaning that on an inflation-adjusted basis, rents in San Francisco and San Jose have fallen by double digits and remain flat in other high-cost coastal markets.

The office market has been weaker almost everywhere. To keep buildings occupied, landlords have had to resort to offering months of free rent and other financial incentives. Even so, vacancies have risen in many cases, and there’s a wave of leases expiring over the next few years. With commuting patterns remaining far below pre-pandemic levels, it’s not clear what the resolution will be.

As concerning as this is, it would all be so much worse without the kind of elevated inflation we’ve been seeing. If the economic recovery over the past two years had been more like the one we saw after the 2008 recession, inflation might have averaged 1% a year. Meaning the double-digit declines in inflation-adjusted rents in the San Francisco Bay Area would probably have been realized in nominal rents instead.

A collapse in nominal rents would have been far worse because prices for some goods and services are often sticky on the downside. Landlords and building owners might not want to set a new standard of far-lower rents, so they might have chosen to accept higher vacancy rates for a while until pricing recovered. Those higher vacancy rates would not only have worsened the housing shortage in the short term, they would have signaled apartment developers to hold back on construction, which would shrink the development pipeline in the future — resulting in even less new housing over the next few years.

The situation would probably have been even worse for the office market. It's been taking hefty incentives to keep some buildings leased up even with inflation roaring. In a disinflationary environment where money was tighter, more companies would presumably choose to let their leases expire and ride out the storm until there was more clarity on future work patterns.

For building tenants, inflation brings a kind of "heads I win, tails I win" dynamic. If commuting patterns do normalize over the next couple years, companies will be glad they kept their office space. And even if commuting stays light, thanks to all the inflation we've gotten — and might continue to get — rents could fall 15% or 20% on an inflation-adjusted basis, softening the blow of holding on to under-utilized office space.

This inflation dynamic has geographic winners and losers. The biggest winners have been apartment and office building owners in high-cost cities such as San Francisco and New York, where office culture represented a significant part of the local economy. The biggest losers have been renters in low-cost states that aren't as office-centric — perhaps people like service workers in Arizona and Florida — where rents have soared thanks to an influx of domestic migrants from higher-cost cities.

So when we think about the economic impacts of the pandemic and inflation, we should keep in mind that we managed to avoid some localized real estate crises that might have been inevitable under different circumstances. High inflation is painful but the alternative would have been no picnic, either.

To contact the author of this story: Conor Sen at [email protected]