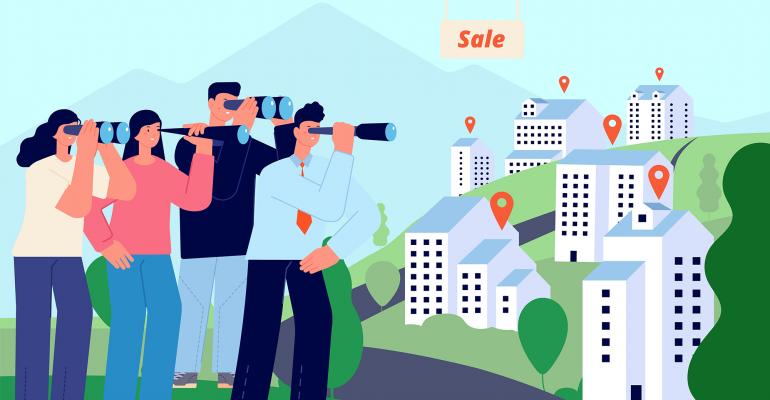 The Battle of the Bids allowed real estate investors and brokers to test their feel for the CRE market by guessing the final price of properties trading through online auction.

When online commercial real estate exchange Ten-X first conceptualized its Battle of the Bids game, its objective was to create a fun way to generate awareness of its services and drive usage of its platform.

The exchange, which is part of real estate data firm CoStar Group, hoped the game would not only encourage existing customers to engage with its technology, but demonstrate to new customers the value of commercial real estate auctions.

Related: What Does CoStar’s Purchase of Ten-X Say about the Firm’s Ambitions in the Proptech Sector?

Designed to test and celebrate the skill of real estate professionals, Battle of the Bids was so successful, according to Ten-X’s President Steve Jacobs, the company plans to bring the game back in 2023.

“From our perspective, it exceeded our expectations—it was an 11 on a scale of one to 10,” he says. “The go-to-market plan for Battle of the Bids 2 is sitting on my desk as we speak. We anticipate doing it again next year, but with some improvements that we learned from the first game.”

Related: The Higher Cost of Capital is Beginning to Erode CRE Asset Prices

Envisioned as “fantasy football for real estate,” Battle of the Bids allows players to participate in eight Ten-X auctions—called “rounds” in the game—by placing wagers on up to 10 properties per round. Backed by real-time data, the wagers estimate the price at which the chosen properties would trade during auction.

Players devoted time and energy to researching historical sales, monitoring the real-life auction of the properties, and placing their bets on the final prices of $900 million in real properties that were traded on Ten-X during the competition.

At the conclusion of the game, Ten-X awarded more than $3 million in total prize money. Mike King, a senior vice president in Kidder Matthews’ Seattle office, became the grand prize winner. He also placed in the top 10 in several rounds, bringing his total winnings to more than $1.3 million, along with a $100,000 donation to Big Brothers Big Sisters.

Ten-X launched the game in April, after spending several weeks building out the Battle of the Bids user interface and online leader board. Rounds occurred every other week and ended in August. About 13,800 people participated in the game, and the number of players grew with each successive round, Jacobs notes.

Because Ten-X wanted to ensure that the players were qualified real estate industry experts, participation in the game was by invitation only. Relying on data from CoStar and its group of companies, Ten-X invited a mix of real estate investors, brokers, appraisers and property management experts. The company also invited residential real estate brokers due to its connection to apartments.com, another CoStar company.

“We didn’t want to open the game to just anyone, so we looked internally at the entire universe of CoStar Group companies and their past and current users,” Jacobs says.

While the game was underway, visitor traffic on the Ten-X and Battle of the Bids websites spiked. From April to August, roughly 16 million visitors logged on to the websites, representing an increase in traffic of 130 percent year-over-year, according to Jacobs.

“A game-changing branding campaign for a company like Ten-X costs anywhere from $5 million to $15 million,” he notes. “When you take into account all the costs related to Battle of the Bids, including the product build, marketing and prize money, it accounted to roughly half of what we would typically spend.”

“The game was a lot of fun, and we received a lot of positive feedback, but at the end of the day, you have to ask, ‘What did you really get for it?’,” Jacobs says. “If we yield all the revenue from that new inventory, it will account for 3 times the cost of the Battle of the Bids campaign. From our perspective, that’s a pretty phenomenal ROI.”

Currently, Ten-X is conducting surveys of the real estate professionals who participated in Battle of the Bids with the dual purpose of gaining a better understanding of player sentiment and soliciting suggestions for way to improve the game. The company will use the responses to refine the next Battle of the Bids, which would take place during the same time span as this year’s game.

In the meantime, Ten-X has already decided on one significant change: the game will no longer be invitation-only, according to Jacobs. Instead, it will be open to a broader group of commercial real estate professionals. The company is debating whether it wants to change the number of rounds and the amount and type of prizes.

“Ten-X ran an impressive game, and the fact that they built an entire platform just to make this game happen was incredibly impressive. I’m very competitive, and I really liked the live leader board that showed player names moving up and down as the auction was going on,” says King.

Battle of the Bids generated a lot of excitement for King and his colleagues at Kidder Matthews. “Everyone had a lot of fun with the game,” he notes. “I hope Ten-X hosts one every year. If they do, I plan to become the Joey Chestnut of the Battle of the Bids.”