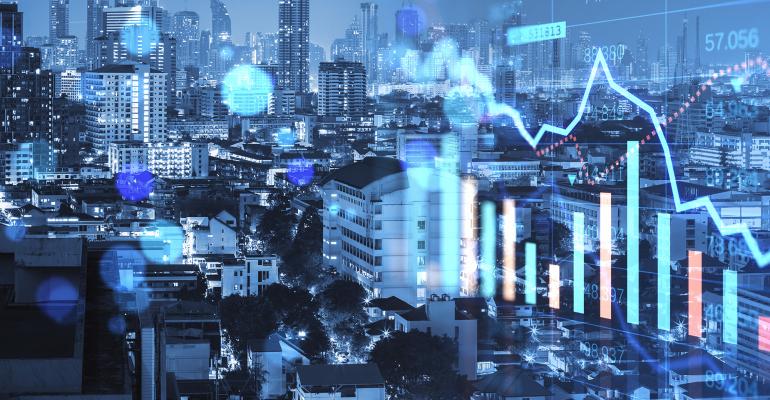 A bid/ask gap has emerged between buyers and sellers and real estate investors attempt to navigate the shifting economic climate.

Commercial property prices that have been hovering at near peak levels are starting to slide lower, and with more interest rate hikes looming, it could turn out to be a slippery slope for some sellers.

“The higher cost of capital is resulting in a repricing of risk across the broader economy, and real estate assets are squarely in the middle of that,” says Bryan Koop, a vice president on the Boston Capital Markets team at Colliers International. “Asset values have already taken a hit with the cost of capital increases.”

Although the 10-year Treasury yield has receded since reaching a high of 3.5 percent in June, it is still running about 130 basis points higher than the start of the year at roughly 2.9 percent as of mid-July. “At current interest rate levels, those borrowing money can’t pencil out any returns based on cap rates that existed nine months ago, because it results in negative leverage,” says Koop.

Cap rates are climbing, and the market is still in the early days of repricing assets with more interest rate increases ahead. Markets are anticipating that the Fed will raise interest rates by another 75 or 100 basis points at its next meeting scheduled for July 26-27. The Fed is expected to move aggressively to curb accelerating inflation, which hit a four-decade high of a 9.1 percent annual rise in June.

Periods of repricing typically result in bid-ask gaps that can slow transaction activity and shift buyer and seller strategies, and the current marketplace is no different. “Sellers want yesterday’s pricing and buyers are looking for better pricing tomorrow, and the bid-ask gap is really being fueled on how quickly the market moved,” says Barbara Perrier, a vice chairman in Capital Markets at CBRE specializing in industrial and logistics assets.

The bid-ask gap that is emerging is by no means one-size-fits-all. Many sellers are well aware of the new market realities and are adjusting expectations accordingly. “My perception of this point in time is that the sellers are in tune with what’s going on with the increase in interest rates, and we haven’t seen a tremendous amount of sellers digging in their heels and saying, ‘my price is the only price,’” says Lee Shapiro, executive vice president and director of retail brokerage at Kennedy Wilson Brokerage in Beverly Hills, Calif. “If they are genuine and want to trade, they are willing to move on pricing.”

Several months ago, well-located commercial properties in the Los Angeles market were selling at cap rates in the high 3 to low 4 percent range. There also was a narrow delta of perhaps 50 basis points for assets in tertiary markets as compared to the better quality markets, notes Shapiro. Rising interest rates coupled with uncertainty on where the economy is headed is putting upward pressure on cap rates in the L.A. market. Top submarkets, such as Rodeo Drive, have seen pricing remain very stable, while cap rates on commercial properties in the broader market have moved 25 to 50 basis points. “So, there hasn’t been a tremendous jump yet in the better quality product on the market,” he says.

Seller expectations are vastly different depending on their situation and financing structure. For example, if someone has owned a property for the past decade and has accrued good value appreciation, they are rushing to sell now before their gains erode. Some might be already too late as properties that are on the market or coming to the market are getting repriced with lower values almost across the board. Everyone is well aware of rising rates, and a lot of sellers are accepting the repricing because they think it is only going to get worse, says Koop. “I wouldn’t say that everyone has come to grips with it, but we’re trending towards seller expectations being reset because the headlines are on everyone’s radar and you can’t deny them,” he says.

There are not a lot of motivated sellers that are holding out for what properties were worth six to nine months ago, agrees Erik Foster, principal and head of industrial capital markets at Avison Young in Chicago. Sellers who had hopes of transacting at pricing that existed several months ago, are likely not going to list assets in the current market unless they have to for some reason. “I believe there could be a bit of a rush to transact in the third and fourth quarters of this year given the potential interest rate hikes that are forecast that could further impact the debt markets and erode buyer leverage,” he adds.

Anecdotally, there are plenty of stories of assets on the for-sale market that were pulled from the market because bids fell short of expectations, or sales fell through because buyers dropped out or financing was not as expected. In many cases, the pricing a seller could have gotten 90 days ago no longer exists. That being said, the repricing that is occurring varies depending on the market and property with some assets seeing little or no movement, while others have seen bigger jumps.

In the industrial and logistics sector, interest rate increases have been more impactful on repricing assets with longer term leases. “On shorter term leases, we have seen less impact as the mark-to-market story is strong, and if investors can see a big bump in the net operating income, they will still be aggressive on pricing,” says Perrier. According to Perrier, cap rates on industrial and logistics facilities have increased between 25 to 125 basis points on average, with increases depending on the weighted average lease term.

Industrial continues to have a bit of a “favored nation” status, adds Foster. Industrial fundamentals are still at record low vacancy rates in almost every market and properties are experiencing healthy rent growth. The pricing gap did widen on industrial assets as interest rates started to move. However, it widened more precipitously with B buildings and secondary locations, whereas the gap did not move as much for core buildings in major locations, he says. “We have not seen is a lack of buyer demand for assets, but simply a repricing at a different level,” he notes.

According to CBRE, cap rates for multifamily assets have increased by up to 50 basis points, depending upon quality of the assets and specific market. “We are in a period of price discovery and bid-ask gaps for multifamily assets are deal-by-deal specific,” says Brian McAuliffe, president, Multifamily Capital Markets for CBRE. According to McAuliffe, any gap that exists seems to be bound by two things: 1) Buyers recognize that sellers are not willing to entertain requests for big discounts. 2) Sellers recognize there are significant embedded gains over the past few years that are enabling them to accept discounts.

According to the latest MSCI RCA CPPI Index, property prices as of May were up 18.8 percent year-over-year. Industrial led all sectors with gains of 28.6 percent, but even office prices had rallied with a gain of 12.2 percent. The one-month gains were more moderate at 1.1 percent for all property types.

Although properties are still trading, rising debt costs are shrinking bidder pools. “Instead of having 15 to 20 offers on a deal, we may have only five or six,” says Perrier. Smaller deals are easier to sell than larger ones, because of the need for financing on the larger transactions. The 1031 exchange buyer with cash has a strategic advantage and is able to win deals that maybe traditionally they couldn’t a few months ago, whereas private equity groups and other more debt sensitive buying groups are having a tougher time in today’s market, she says.

“We’re seeing executions and good deals right now, but the depth in terms of the amount of buyers showing up is night and day to what it was last year,” agrees Koop. Highly leveraged buyers that have been transacting based on their ability to financially engineer levered returns are on the sidelines. Those buyers who have cash or are sitting on dry powder are in control, and they are being selective and dictating terms, he says.

In recent rising rate cycles over the past decade, investors were able to pivot to a variable rate debt strategy. However, in the current environment, floating rate strategies do not offer the same level of benefits as in recent years, notes  McAuliffe. However, rising debt costs are not the only factor contributing to shrinking bidder pools. “While we have seen a drop in the average LTV that certainly favors buyers with lower leverage requirements, there’s not enough data to conclude that rising borrowing costs are the primary driver,” he says. Uncertainty on the global economic outlook is weighing on both investors and lenders, and the recent inversion of the yield curve has created additional stress on market conditions.

Despite headwinds, market participants remain optimistic that the second half of the year will be active as both buyers and sellers eager to get deals done before year-end. “We’re as busy as ever,” says Koop. “Right now, we have people who are motivated and want to transact and get their deals across the finish line, but it will be interesting to see what comes in three months with liquidity pulling back is going to be interesting.”