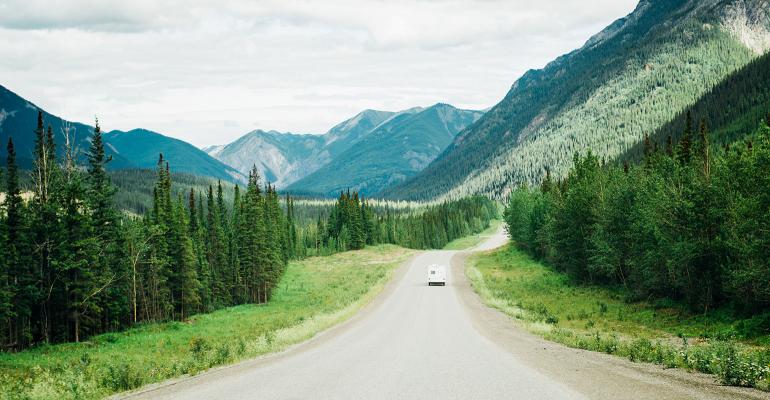 Fixed Income Outlook: What We Expect in the Second Half of 2019

Entering the second half of 2019, our portfolios are positioned to reflect seven key themes.

1. Populism—Populism is the enemy of globalization, the pullback from which will weigh on global growthand ultimately lead to higher inflationary pressure over the long term.

2. Trade—Trade tensions will serve as a mechanism for de-globalization with the battle among regionslasting years and not months. Ongoing uncertainty favors incremental investment in localized production over global capital deployment.

3. Chinese Growth—China will be forced to use its large but exhaustible capacity for fiscal and monetary stimulus to offset the impact of de-globalization and the resultant decline in foreign investment.

4. U.S. Growth & Inflation—While slower, U.S. growth will prove durable, supported by increased productivity. In the near term we expect inflationary pressures to remain muted despite the longerterm pressures we anticipate from the pullback in globalization.

5. Fiscal—The impediments to fiscal expansion are self-imposed. Political pressure will grow to use fiscal policy to mitigate downside risks to growth.

6. Central Banks & the Fed—The ECB and BOJ clearly represent the risk of a central bank running out of bullets. The Fed desires to avoid this same predicament and stands ready to respond aggressively to any further deterioration in the outlook for growth.

7. Markets—Slower global growth, trade uncertainty, and geopolitical risks suppress interest rates and will lead to higher downside risks despite central bank efforts to counter these influences. This environment will provide opportunities to monetize swings in volatility. 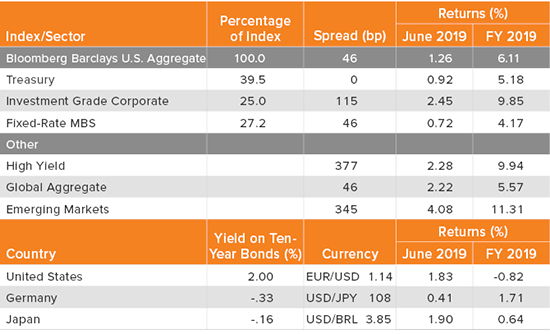 Source: Bloomberg, JPMorgan, Standard & Poor’s. All spreads are to U.S. Treasurys and are option-adjusted except for emerging markets, which are nominal. All returns are total returns including dividends, expressed as percentages, in U.S. dollars.

The probability of a 50bp rate cut during the July FOMC meeting plummeted on June’s retail sales print and jobs report – the latter of which, at 224k was a sharp improvement from May and lifted the three-month and six-month averages well into expansionary territory. We believe the Fed will cut 25bps at its upcoming July meeting, and announce plans to cut another 25bps in September. This will lead to a steeper twos-to-tens yield curve, with the 10-year U.S. Treasury yield keeping in the range of 1.9-2.2%. Furthermore, we expect the US dollar to remain range-bound against developed market currencies. Meanwhile, expectations for further rate cuts and quantitative easing by the ECB were re-ignited by Mario Draghi’s Portugal speech, and Christine Lagarde’s nomination as the next ECB chief only adds to these expectations. Ten-year German Bunds traded down to -40bp, a historical low.

IG spreads bounced back in June as the prospects of easing monetary policy managed to overwhelm potentially improving-but-still present trade tensions. Fundamentals remain reasonable, but we expect a slowdown heading into Q2 earnings season. With negative rates on $12 trillion in global fixed income, US IG should continue to see interest from yield seekers. At $75 billion, new supply came in lower than expected and failed to catch up from soft new supply in May. With the technical picture still positive but spreads back at the lower end of the YTD range, we downgrade our rating on IG to neutral.

June saw a reversal of the May pullback as higher-quality risk assets came into favor on somewhat relieved trade tensions and prospects for a rate cut by the Fed. Demand for CCC-rated bonds did not match the bounce in the mid- to higher-rated tranches, however. The same held for the new issue market, in which demand focused more on B- and BB-rated deals versus CCC-rated new offers. Given the strength in the rally year-to-date, we believe valuations are back to fair levels, but further tightening will have to be driven by CCC-rated issuers.

Agency mortgages whipsawed in June, first lagging Treasurys during the first two weeks as rates rallied below 2.1% and volatility picked up, only to reclaim that underperformance as rates stabilized and volatility softened through the second half of the month. With steady demand from banks and overseas investors, and with ongoing GSE reform uncertainty there was a clear preference for GNMA collateral versus conventional issues. AgencyRMBS is likely to outperform riskier credit sectors, but should lag Treasurys until rates stabilize and refinancing fears abate.

We maintain our preference for non-agency RMBS, as the sector’s recent underperformance puts it at a risk-adjusted, relative value advantage versus other alternatives. Additionally, expectations for deleveraging will foster spread tightening pressure for much of the asset class. Other underlying fundamental dynamics are also positive, such as an improving mortgage credit backdrop, positive home price appreciation, available home equity and consumer credit performance.

Within CMBS, relative value has improved following June’s underperformance. New issuance is expected to run higher than usual for summer months; therefore, the potential for outperformance is limited in the near term in the absence of a CMBS-oriented catalyst - either fundamental or technical.

We continue to like ABS given its access to US consumer-oriented risk housed in robust structures with relatively short spread durations. Keeping in mind questions around the negative ongoing performance of subprime borrowers, overall the state of the US consumer is strong and the ABS market knows it. With credit performance strong across almost all subsectors, demand is likely to remain intact.

The growth differential between emerging markets and developing markets (DM) should increase in 2H19 as DM growth continues to soften and EM growth rebounds. Risk sentiment improved sharply on the dovish stance of the Fed and thawing between the US and China following the G20. While the Fed’s position is a relief to EM central banks and inflation remains broadly subdued, many are starting to worry that their currencies are getting too strong, and there is some worry we are heading for currency war given the uncertainty over trade.

This commentary has been prepared by Voya Investment Management for informational purposes. Nothing contained herein should be construed as (i) an offer to sell or solicitation of an offer to buy any security or (ii) a recommendation as to the advisability of investing in, purchasing or selling any security. Any opinions expressed herein reflect our judgment and are subject to change. Certain of the statements contained herein are statements of future expectations and other forward-looking statements that are based on management’s current views and assumptions and involve known and unknown risks and uncertainties that could cause actual results, performance or events to differ materially from those expressed or implied in such statements. Actual results, performance or events may differ materially from those in such statements due to, without limitation, (1) general economic conditions, (2) performance of financial markets, (3) interest rate levels, (4) increasing levels of loan defaults, (5) changes in laws and regulations, and (6) changes in the policies of governments and/or regulatory authorities.

This document or communication is being provided to you on the basis of your representation that you are a wholesale client (within the meaning of section 761G of the Act), and must not be provided to any other person without the written consent of Voya, which may be withheld in its absolute discretion.