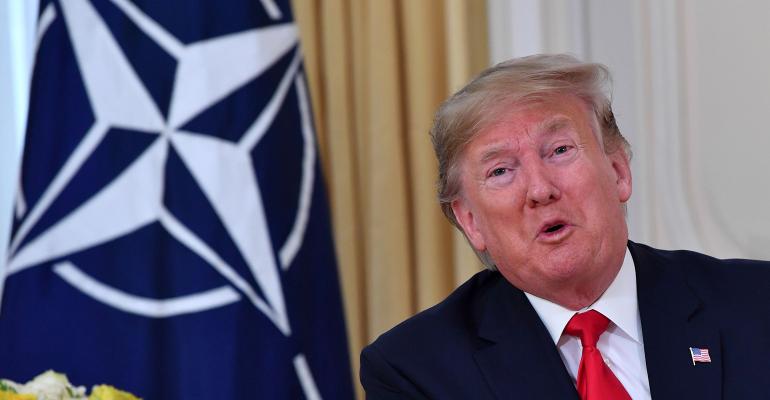 Here’s What Happens to Markets If U.S. Tariffs on China Kick in Dec. 15

President Donald Trump said Tuesday that he saw no urgency to complete a trade deal with China.

(Bloomberg) -- President Donald Trump’s latest missives on trade are a wake-up call to markets close to record highs that a major deadline is looming with China.

The Dec. 15 flashpoint on tariffs was thrown into sharp relief Tuesday when Trump said he sees no urgency to complete a deal, right after he threatened an assortment of trading partners with levies.

“If tariffs scheduled for Dec. 15 are implemented it would be a huge shock to the market consensus,” said Sue Trinh, managing director for global macro strategy at Manulife Investment Management in Hong Kong. “Trump would be the Grinch that stole Christmas,” she said.

Global equities came within a whisker of their all-time high last month, propelled in part by swelling optimism that at least an interim U.S.-China trade deal was in the offing. Meantime, the clock kept ticking towards Dec. 15, when Trump has threatened to impose 15% levies on $160 billion of Chinese imports.

With about two weeks to go on the China front, the Trump administration Monday hit Brazil and Argentina with steel tariffs and proposed levies on France as punishment over a tax that’s hit large American tech companies.

Moves by self-styled Tariff Man Monday were enough to trigger the biggest Wall Street sell-off in eight weeks -- with a little help from a weak U.S. manufacturing report.

“I have no deadline,” Trump told reporters Tuesday in London when asked if he wanted an agreement by year end. Stocks fell.

The U.S. president suggested that in some ways, it might be better to wait until after the November election.

The following are the views of a number of market participants on what happens if the tariffs on China kick in Dec. 15.

It will be “definitely risk-off across the screen,” Tongli Han, chief investment officer at Deepblue Global Investment, said in an interview with Bloomberg TV. “What happened recently makes this trade deal more costly for Chinese leaders -- so I’m seeing a gloomy future for the short term, one-to-two months.”

With the clock running down on 2019 and a prospects of a trade deal looking more remote it’s time for investors to take a little bit of risk off the table, said Steve Brice, chief investment strategist at Standard Chartered private bank, on Bloomberg TV.

“It looks like it’s going to be pushed to the beginning of next year at the best case,” Brice said. The message to investors is “maybe trim a little bit of equity exposure, or certainly not chase the market at this stage. But look to do so in the next few weeks if we see a 5-to-7% pullback.”

Longer term, Brice remains optimistic “the U.S. and China will still strike a deal of some sort. That will reduce uncertainty and help the global economy do well.”

For Kerry Craig, global market strategist at JPMorgan Asset Management, a key concern is markets have already priced in the prospect of a trade deal that has yet to be signed.

“There had been a lot of optimism built in around a trade deal and it’s still the thing that will weigh on markets over the coming months,” Craig said on Bloomberg TV. “In the meantime we need to see more of a pick-up in the global economy to really offset some of those uncertainties.”

For some, the retreat in equities at the start of the week already presents a buying opportunity.

The renewed tariff pressures on South America and Europe are likely an effort to bolster Trump’s “tariff man” image ahead of a trade deal with China, he said.

“With the economy in a very delicate situation, if this came on, it would seriously ratchet up the risk of a recession -- and the White House wouldn’t want this situation going into the 2020 presidential election next year,” Lee said.

There may be some massive initial market swings in store, said Chris Weston, head of research at Pepperstone Group Ltd. in a note to clients.

“We could face a wild day,” he said. The S&P 500 is likely to fall about 2%, with currencies including the yuan, Australian dollar and Korean won also likely to move, he said. A relief rally may be in the offing afterward, particularly if there’s agreement to revisit talks in 2020, he said.

“Even if there is a trade deal, it doesn’t solve most of the issues that we still have with China,” which is something that markets are going to have to reflect in time, said Christopher Smart, chief global strategist at Barings Investment Institute, on Bloomberg TV. “In fact, it probably makes the relationship more difficult to manage, because we’ve taken tariffs off the table.”

Smart said “time is running out” to get a deal done this year, given the logistics involved in setting up a presidential meeting. What does offer solace is that global central banks have eased policy and injected liquidity, postponing the recession that investors had been worrying about, he said.

“We would hope that a bout of common sense breaks out,” Philip Shaw, chief economist at Investec, told Bloomberg TV. “Don’t forget that this situation is very volatile -- it swings to and fro. We wouldn’t interpret too strongly events of one day.”

To contact the editors responsible for this story:
Christopher Anstey at [email protected]
Cecile Gutscher