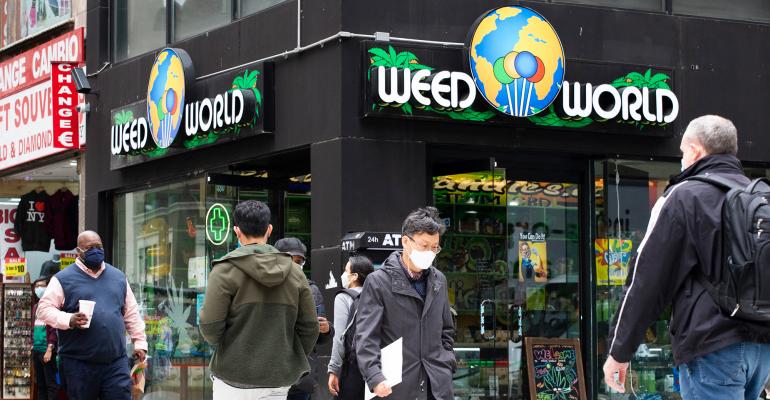 Opportunities—and pitfalls—abound when it comes to leasing to cannabis businesses in the newly opening market of adult use marijuana in the New York metropolitan area and beyond.

In what is sure to be a watershed moment for the young cannabis industry, the market for legalized adult use marijuana will likely be opening in the tri-state area sometime this year. With the passage of legalization in New Jersey on Feb. 22 and New York on March 31, and with Connecticut (and Pennsylvania, Maryland, Delaware, and Rhode Island) not far behind, cannabis businesses will soon be sprouting up throughout the region, bringing with them billions of dollars in retail sales.

The U.S. legal cannabis market grew 46 percent from 2019 to 2020, reaching a record of $17.5 billion in sales last year. And that rapidly growing market is about to meet a population hub of over 50 million people. In New York and New Jersey each, sales are expected to be almost $1.5 billion by 2023, with estimates soaring year after year thereafter.

Moreover, retail sales represent only a small nugget of the market activity that this budding industry will bring to the region. The direct market will be made up of marijuana cultivators, manufacturers, processors, wholesalers, distributors, retailers and deliverers, and the full economic reach will extend to many other businesses, from packaging suppliers to security operations and countless service providers in between.  All of these players need space in which to operate.

It is no wonder, then, that the real estate industry is taking note, with some property owners intrigued by the potential in this new cannabis market. Indeed, due to the risks, regulatory requirements and inherent uncertainty discussed below, commercial landlords willing to lease to cannabis businesses may wield significant leverage, giving rise to rental premiums and other favorable lease terms.  Landlords should tread carefully, however, and keep in mind three primary considerations: (1) municipalities may not grant authorization to a cannabis business (and may ban them altogether); (2) the timing and requirements of cannabis license applications and approvals present unique challenges which must be addressed; and (3) marijuana’s illegality at the federal level creates various banking, insurance and legal issues.

1. Check for municipal restrictions and proof of municipal approval

In New Jersey, over 70 municipalities enacted a ban before Governor Phil Murphy signed the adult use bill into law on February 22, 2021, and while the law renders those bans ineffective, the municipalities have 180 days from the date the bill was signed to re-enact a ban (or forfeit the right to do so for another five years). In New York, municipalities have until the end of the year to enact any such ban.

Additionally, municipalities in both states may regulate the number and location of cannabis establishments, as well as impose additional licensing requirements. So, before landlords get too far down the road negotiating with an eager cannabis entrepreneur, they should check the locality’s tolerance for new pot businesses and require the prospective tenant to demonstrate municipal approval early in the process (or at least a likelihood of obtaining it).

2. Incorporate cannabis license requirements and timing into the lease

Obtaining a marijuana license requires an intensive and long application process, which can drag on for months or longer, especially if there are any application issues that must be corrected. In fact, nearly 150 medical marijuana license applications were held up for over a year due to litigation in New Jersey arising out of technical glitches, though this was under the prior, less robust regulatory scheme in place before passage of the new law.

Complicating matters, cannabis applicants in both New York and New Jersey must demonstrate the ability to control the designated site as a prerequisite to submitting the license application. This often means producing a signed lease (unless the applicant owns the property outright), long before the tenant is authorized to open for business—assuming the application is granted at all.

One noteworthy exception under the New York law is for “social and economic equity” applicants—women- and minority-owned businesses, low-income individuals, disabled veterans, distressed farmers and individuals with cannabis-related convictions—who need only demonstrate “a plan” for acquiring control of the premises. Stay tuned for how that exception gets fleshed out by the rules and regulations implementing the legislation.

Because the application process is long and uncertain, cannabis leases should be flexible and allow the landlord to terminate if the tenant’s cannabis license is denied or significantly delayed (or if it later gets revoked).  If the tenant wants the same option, the lease should make clear that the tenant’s early termination right only applies if the license is delayed or denied for reasons outside the tenant’s control, and include a termination fee (e.g., payment of unamortized brokerage commissions, tenant improvement allowances and rent abatements, perhaps plus a few months’ rent). Finally, with high land prices in the area, landlords should expect tenants to seek a partial or full rent abatement in the beginning of the term—to allow the tenant to seek the license rent-free (or at a low rental rate)—or a short initial term, as well as landlord’s cooperation during the application process.

Furthermore, the operational and regulatory complexities of a cannabis business will mean more complicated lease negotiations than what some landlords might be accustomed to, especially for industrial properties where leases often do not document operational matters in detail. In both New York and New Jersey, the license applicant must describe its business and operating plan, from water management to odor mitigation, and from hazardous material management to security procedures. These plans must be feasible in the designated premises, so commercial landlords and would-be cannabis tenants should work together to ensure that any water, electricity and security measures (among other operational elements) are acceptable and built into the lease, accounting for the increased tenant improvement funds and passing through to the tenant the increased operating expenses and additional insurance required to cover marijuana operations.

Landlords should also resist the temptation to accept percentage rent, because regulators are likely to view any profit-sharing arrangement as part ownership, subjecting the landlord to certain disclosures and vetting in the application process, as well as potential liability as an interest-holder in the business. Finally, landlords should be mindful of various boilerplate provisions in their form lease, such as “Landlord Access” clauses, which typically grant a landlord entry to the leased premises during working hours—such access to restricted areas by an unauthorized party may violate the terms of the license and jeopardize the tenant’s business.

3. Remember, cannabis is still illegal at the federal level (for now)

Of course, complex operations and regulations are not the only factors driving uncertainty in the cannabis industry; there is also the elephant in the room issue of federal law. Even though U.S. Senate Majority Leader Chuck Schumer recently tweeted that it is “long past time to end the federal prohibition on marijuana” and marijuana reform legislation is in the works in Congress—including laws to enable banking and insurance to fully enter the industry—at best we currently face an uncertain and rapidly changing regulatory environment for cannabis.

With marijuana still listed as a Schedule I drug under federal law, many legal issues remain present when leasing to cannabis businesses. First, if a landlord has a mortgage on the property, the mortgage loan documents likely have a clause prohibiting illegal activity on the property. Thus, leasing to a cannabis business could be a loan default—raising the risk that a lender may call the loan.

Second, there are also banking issues on the tenant side, because most banks will not service cannabis businesses due to federal banking regulations. The number of banks and credit unions willing to serve marijuana businesses has slowly increased, now totaling just over 630 nationwide, but that number is still woefully insufficient. Landlords should make this a tenant issue and require them to utilize a banking institution rather than accept cash for rent, given the security risk and administrative and other associated costs.

Similar to banking, federal insurance regulations scare away many carriers from insuring cannabis businesses or the properties on which they operate. Landlords and their insurance consultants should make sure that both the tenant’s and landlord’s policies provide proper and adequate coverage.

Finally, while the risk of a federal crackdown on marijuana businesses is small and getting smaller, a lease to a cannabis business may not be enforceable under federal law. While some federal courts have enforced contracts related to cannabis, others have not, leaving this area of law murky at best. The lease must therefore be carefully drafted to exclude or limit defenses claiming that the lease is illegal and therefore unenforceable. Furthermore, landlords should consider making state court—and not federal court—the exclusive venue for disputes in the forum selection clause.

In addition to the protections recommended above, landlords should make sure that their lease has strong indemnification protection from the tenant, specifically covering the risks particular to the industry.  Landlords should also require a full payment guaranty from a credit-worthy person, which guaranties are more common than in other commercial leasing areas. Rental premiums are also standard to justify the risks inherent in leasing to cannabis businesses. Perhaps most importantly, there is no replacement for a landlord thoroughly getting to know its prospective tenant and its business as part of the diligence process.

Despite the risks and uncertainties discussed above, there is no doubt that the adult use marijuana market offers immense opportunities for commercial landlords across the Northeast. It is certainly true that municipal requirements and approval, licensing requirements and timing, and illegality at the federal level present challenges, but they can be mitigated with the right due diligence and careful lease drafting. So, get a good lawyer.

Duncan Delano, Esq. is an associate in the real estate practice of Haynes and Boone LLP.