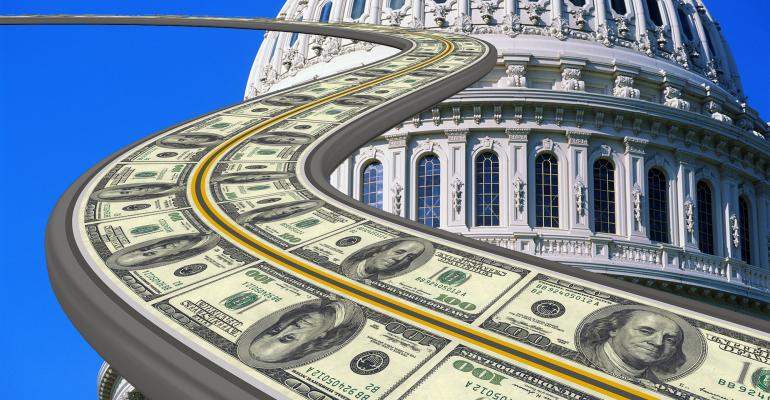 Snapshot of a Political Football: Where Infrastructure Bills Stand Today

IREM President Chip Watts provides an update on the group's perspective as the saga surrounding two big spending bills and raising of the debt ceiling plays out in Washington.

This column comes with a warning label: Every issue we’re about to touch on is in a fluid state, and the status of each can change at a moment’s notice. That said, let’s begin:

As probably everyone knows by now, there are two bills currently kicking around Congress that could impact our nation’s infrastructure. One of the fluid considerations, however, is exactly what constitutes “infrastructure.”

Related: How Much Disruption Will Ida Cause for the CRE Industry?

But first, let’s look at what infrastructure means to real estate and property managers. Our buildings are no longer just “our buildings.” More than ever, where we work and where we live are parts of the larger fabric of our communities. Infrastructure is the thread that knots the fabric together, connecting our homes to our work and vice versa, allowing easy access to homes, offices, shopping, schools, hospitals, airports, and the community. Further, infrastructure, done properly, is an equalizer of sorts, providing equal reach to these destinations by everyone, regardless of income level. Infrastructure improvements are also the source of jobs, and they generate both directly and indirectly much-needed economic development and tax revenues.

The elevator pitch: infrastructure bills at a glance

One of the two bills currently in motion leans toward a more traditional definition. It’s a $1 trillion package titled, “Infrastructure Investment and Jobs Act,” which was approved by the Senate early in August. The bipartisan bill calls for physical improvements like roads and bridges (allocating $110 billion to such projects); passenger and freight rail ($66 billion); airports ($25 billion); and port infrastructure ($17 billion). Issues including electric vehicles, community revitalization and zero- and low-emission buses and ferries are also folded into the package.

There’s also the “reconciliation bill"—technically a budget resolution—that calls for the expenditure of some $3.5 billion over the next 10 years for “human infrastructure,” such as expanding education, healthcare and childcare support, as well as climate issues. There are also, in the words of CNN, “further investments in infrastructure” not included in the bipartisan bill, such as improvements to Veterans Administration (VA) hospitals and boosting U.S. manufacturing. Also included is a healthy allotment to fund more affordable housing across the country.

There’s some good news concerning reconciliation. The House Ways and Means Committee has determined that changes to 1031 like-kind exchanges will not be included as one of the methods of paying for the infrastructure bills. But once again, that’s how it stands today.

As IREM Director of Government Affairs Ted Thurn explains, a vote on the bipartisan Senate bill on September 30 has been called for, but there’s a push/pull between moderates and progressives on whether the reconciliation bill should also be voted on at that time.

The point may be moot. Remember what we said at the top about fluid issues? Both the House and Senate returned from their summer breaks last month to face more work on their collective plates than can ever be remembered. And given the critical nature of that work, it’s a fairly good bet that both infrastructure bills will be pushed to a back burner.

That work includes a vote on a continuing resolution to fund the government through the rest of the year. The alternative is a government shutdown if a deal is not reached by September 30. Akin to that is a vote on raising the debt ceiling, basically authorizing the payments of programs already authorized. Republican Senators blocked those measures in a vote on Monday. As if that were not enough, also awaiting action is an issue close to the hearts of property managers, the reauthorization of the National Flood Insurance Plan. Any one of these programs could very well push the infrastructure bills back by weeks.

For these reasons stated at the outset, we align ourselves with our coalition partners in their support of congressional action that will bring about much needed infrastructure improvements. And we wait and watch the path of both bills to flag our representatives inside the Beltway about any attachments—such as 1031—that could harm our industry.

We’ll say it once more. Everything is fluid. But no matter the twists and turns the bills are likely to take in coming days and weeks, we’ll maintain our vigilance to ensure they reflect the best interests of our membership.

Chip Watts, CPM, CCIM, C2EX, AHWD, is the 2021 president of the Institute of Real Estate Management. In addition, he serves as president and executive CPM for Watts Realty Co., Inc., AMO, in Birmingham, Ala.