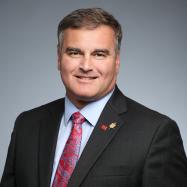 Chip Watts, CPM, CCIM, is the 2021 President of IREM (the Institute of Real Estate Management). He’s also president and executive CPM for Watts Realty Co. Inc., AMO, in Birmingham, Ala.

Chip began his real estate career in 1998 as general manager of Watts Realty, and earned his current title in 2006. During his tenure, he received the AMO accreditation on behalf of the company. Watts earned his CPM designation in 2004 and his Certified Commercial Investment Member (CCIM) designation in 2002. He served as the 2008 president of IREM’s Alabama chapter and the 2009 president of the CCIM Institute’s Alabama chapter.

Watts served for two years as an IREM regional vice president. He also chaired the IREM Chapter Leadership Forum, the AMO Taskforce, and has been a long-time member of the IREM Governing Council. Also in 2008, Watts was honored by the Birmingham Association of REALTORS with its “REALTOR of the Year” award and served as its president in 2014. He also served as a trustee to the University of Alabama Center for Real Estate Board for 10 years, happily wearing his Auburn orange and blue on the Alabama campus!

Along with his professional affiliations, Watts is very involved in his community. Over the past 20 years, he’s been active in the YMCA of Greater Birmingham, currently serving as a Board Member, and was honored by the organization as its 2007 “Adult Volunteer of the Year.” Watts takes great pride in this civic service, as his family’s been involved for generations with both the YMCA in Alabama, and the YMCA Blue Ridge Assembly in North Carolina. He received the YMCA's highest volunteer award by becoming a member of the prestigious Order of the Red Triangle in 2012.

In 2007, Watts’ family company turned 100 and received the Centennial Award from Birmingham, something that Watts, as the 4th generation president, is very proud of. Watts is a member of the IREM Alabama chapter.

Heading into 2022, Clear Communication with All Constituents Remains Essential for Property Managers
Dec 22, 2021
The industry continues to rise to challenges presented by the pandemic.

How the Property Management Industry Can Address the Challenge of the Talent Shortfall
Nov 17, 2021
It takes both a national and local effort to increase the visibility of the property management profession and its lesser-known benefits.

What Infrastructure Means to Affordable Housing—An Apolitical Assessment
Nov 01, 2021
Beyond the economics, there’s a strong relationship between affordable housing, infrastructure and social equity.

Snapshot of a Political Football: Where Infrastructure Bills Stand Today
Sep 28, 2021
IREM President Chip Watts provides an update on the group's perspective as the saga surrounding two big spending bills and raising of the debt ceiling plays out in Washington.

Rental Assistance Doesn’t Matter If Funds Can’t Get to Renters
Sep 07, 2021
With the eviction ban lifting, the need to disburse rental assistance in an expedited manner is of great importance.

To Attract Gen Z Renters, Property Managers Must Embrace More Technology
Aug 04, 2021
Technology-enabled apartment features are among the most sought-after amenities among this renter group.

How Property Managers Should Tackle Sensitive Return-to-the-Office Initiatives
Jun 28, 2021
Vaccinations aside, a personal association with your tenants is key to helping them navigate a safe return to the office.

There’s Work to be Done before Full Recovery in the Multifamily Sector
Apr 28, 2021
Multifamily investors and developers need to seek more opportunities in the underserved affordable housing market.