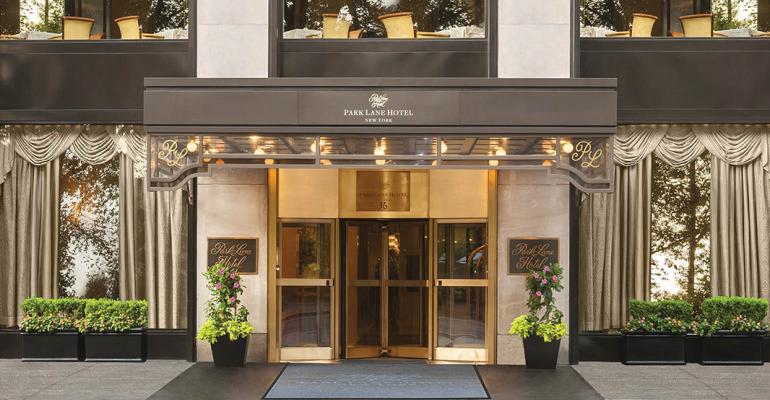 The deal is part of U.S. Department of Justice’s effort to recover the money that flowed through a scandal-plagued foreign investment fund.

(Bloomberg)—A stake in New York’s Park Lane Hotel has been sold to an Abu Dhabi sovereign wealth fund as part of the U.S. Justice Department’s efforts to recover billions of dollars that flowed through Malaysia’s scandal-plagued 1MDB investment fund.

Roughly $140 million for the interest in the hotel, which sits on Central Park South between Fifth and Sixth avenues near Manhattan’s Billionaires’ Row, was transferred to the U.S. government around Dec. 10, said Thom Mrozek, a spokesman for the U.S. Attorney’s office in Los Angeles. A representative for the buyer, Abu Dhabi’s Mubadala Investment Co., declined to comment.

The sale was made possible in November, after fugitive Malaysian financier Low Taek Jho, known as Jho Low, agreed to drop his claims to the property in a U.S. forfeiture lawsuit. The Justice Department agreed that dropping the claims is no admission of wrongdoing or liability, according to a statement at the time.

The Justice Department seized Low’s stake based on allegations that he bought it with money stolen from Malaysia’s state-owned 1MDB fund. Prosecutors charged Low with conspiracy and money laundering last year in connection with the looting of 1MDB. The department had been seeking to seize almost $1.7 billion in assets it says were illegally acquired through money diverted from 1MDB, including the super-yacht Equanimity and artwork by Pablo Picasso and Jean-Michel Basquiat.

In recent days, potential new lenders to the Park Lane Hotel were notified of the hotel’s ownership change, which hasn’t previously been reported. Mubadala, the Witkoff Group and partners hired the Newmark Knight Frank debt team led by Dustin Stolly and Jordan Roeschlaub to refinance the 631-room hotel, according to a document seen by Bloomberg News that shows the group is seeking a $600 million floating-rate loan.

According to the document, proceeds will be used to pay down the existing loan, as well as for additional air rights and renovations. The value of the land is estimated to be more than $1 billion, and the hotel itself represents “the last commercial tear-down opportunity abutting Central Park South.”

The Park Lane Hotel was developed in 1967 by the late billionaire Harry Helmsley and owned by a Helmsley family trust until its purchase by Witkoff and entities affiliated with Low in 2013 for about $654 million. Later that year, Mubadala paid Low $135 million for a portion of his stake in the hotel.

The latest deal for a stake in the hotel follows a settlement between the Justice Department and Red Granite Pictures Inc., which resulted in the producer of “The Wolf of Wall Street” paying $60 million to settle claims it financed the move with cash siphoned from 1MDB. It also follows Sony Corp.’s acquisition of EMI Music Publishing. Low’s proceeds from that deal are being held by the U.S. pending the outcome of the forfeiture litigation, and could be joined by the proceeds from the sale of other assets, including a Bombardier Global 5000 jet in Singapore.