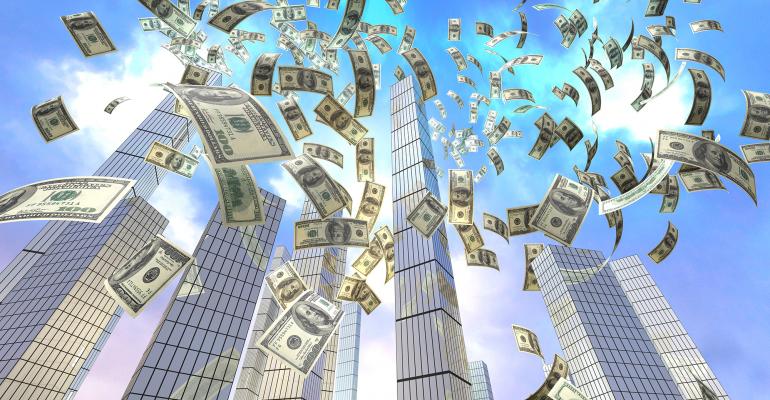 Non-traded REITs will raise about $30 billion this year, roughly triple the volume of capital raised in the sector in 2020.

As Brookfield Asset Management Inc. prepares to launch a non-traded REIT offering in the fourth quarter it joins the ranks of other high-profile firms who have also recently raised capital in the space.

The new REIT, Brookfield Real Estate Income Trust Inc., will consist largely of properties gained from its 2019 purchase of Oaktree Capital Management. “I think what they have seen is that this is an interesting space. It’s got a lot of interest from investors and there is quite a bit of capital being raised,” says Kevin Gannon, chairman and CEO of Robert A. Stanger & Company Inc. The investment banking firm is advising Brookfield on various aspects of the non-traded REIT sector.

Brookfield isn’t the only new entrant this year. KKR and Invesco both have debuted non-traded REITs this year, and there are a couple of other major entities that are contemplating entering the space, notes Gannon. In part, these companies are taking notice of the recent capital raising success. Robert A. Stanger is predicting that non-traded REITs will raise about $30 billion this year—triple the volume of 2020 and about one-and-a-half times the capital raised a couple of years ago. “I think you’re seeing these asset managers that want to attract that kind of capital,” he adds.

Although capital is always a powerful motivator, asset managers also like some of the differences that non-traded REITs offer compared to their publicly-traded counterparts. “One of the things that institutional players are starting to realize is that the public markets are not fully valuing their portfolios, whereas on the non-traded side they don’t have that issue,” says Anthony Chereso, president and CEO of the Institute of Portfolio Alternatives (IPA). Even before the pandemic, publicly-traded REITs have periodically struggled when their stock prices traded below net asset values of their underlying portfolios. And many REITs were hit hard by stock market volatility last year before bouncing back in 2021.

Although that performance itself may now have some investors worried that publicly-traded REITs could now be overvalued. “People are a little bit skittish right now on whether the traded markets are overvalued,” says Chereso.

Additionally, that volatility is often driven by non-industry news items that affect capital flows in and out of the public markets and are not necessarily indicative of the performance of a particular company or property type, notes Byron Carlock Jr., real estate leader for PwC US. “Entities like Blackstone, NUVEEN and other issuers in the non-traded REIT space are offering a branded product that feeds investor appetite for income-oriented product in the real estate space and serves as a complement to the offerings available in the public markets,” he says. “As long as rates are low, I don’t see this changing. Retiring baby boomers in particular like fixed income products.”

“A lot of firms are seeing opportunities where they can maximize values but maximize them outside of the volatility of the public markets,” says Chereso. On the private side, you can still control the value, because it is really the underlying asset and you are not subject to the whims of the equity market, he adds.

A number of industry experts don’t expect to see the increased capital flows into non-traded REITs to slow anytime soon. Inflows are coming from both retail investors and institutions with interest that is being fueled by a number of factors. One reason is that the performance has been very good.

In addition, non-traded vehicles now provide regular valuation information. Every month investors receive an estimate of NAV supported by an appraisal process. In addition, there is a liquidity feature where up to 20% of shareholders can liquidate each year. “We think that is a great attribute that combines all the great features of real estate – pricing on the entrance and exit of the investment, transparency on value and you’re getting to invest alongside some major league asset managers that have great institutional presence,” says Gannon. “So, we think all of those things combine for a great outcome.”

Historically, 85 to 90 percent of the money has been raised by 10 sponsors. That capital is even more concentrated when considering that the top entity—Blackstone—now raises about 70 percent of the money. “We expect that to broaden out a bit as new players enter with the likes of KKR, Ares, Nuveen and others that are all getting traction,” says Gannon. “I don’t think they’re all going to cannibalize each other, they’re going to expand market share, because they will appeal to different people.” Another factor that could help to further expand the market is the opportunity to introduce more  specialty non-traded NAV REITs, he adds.

The public non-traded REIT structure can be an attractive way for asset managers to aggregate capital to assemble a portfolio, while at the same time giving managers flexibility to list, sell or liquidate the portfolio in the future after a multi-year holding period.

One possible example of that is the Black Creek Industrial REIT IV, which is now owned by Ares Management Corporation. The REIT has continued to grow, recently announcing that it had closed on the acquisition of 48 industrial properties totaling 8.3 million square feet for $920 million. Most of these non-traded REIT NAV vehicles are viewed as perpetual vehicles, meaning that they could be around forever. However, Ares has the ability to list that at a later date if they think that is an appropriate exit for their investors, notes Gannon.

“There are certainly some benefits to the public non-traded REIT structure, such as providing broad access to the retail investor market with permanent capital and insulation from the vagaries and pressures of the public equity capital markets that the listed REITs must contend with,” says Daniel LeBey, partner, Capital Markets and Mergers & Acquisitions at the law firm of Vinson & Elkins. Also, REITs, unlike private funds, issue Form 1099s to investors instead of Form K-1s. LeBey also notes that the public non-traded REIT sector has changed in recent years with the entrance of more prominent higher quality sponsors like Blackstone. However, he doesn’t expect to see an explosion of new non-traded REITs being formed.

Others see some good runway ahead for new non-traded REIT vehicles. In many cases, managers can’t spend capital quickly enough. “The reality is that it is really challenging for these large global managers that are flush with cash to go out and pick off assets one at a time,” says Chereso. So, there are some strong incentives to go out and find like-minded portfolios where they can gain efficiencies in operating costs, or perhaps increase leverage across a portfolio to improve investment returns and shareholder value. Managers can incubate that in a non-traded REIT vehicle and then look at how to monetize this at some point in the future, he adds.