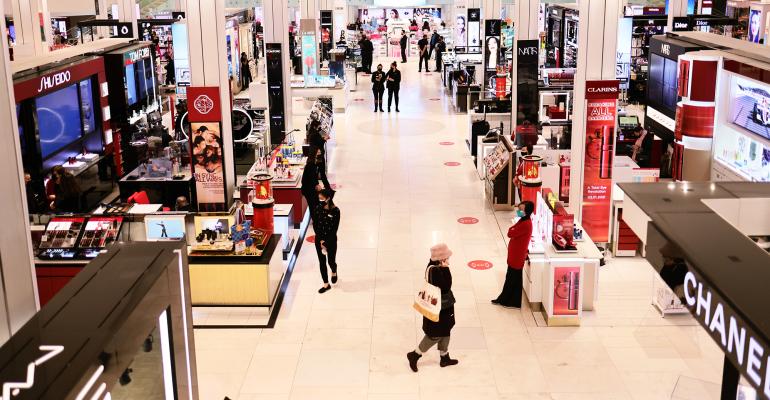 A lot more is riding on the plan for a skyscraper atop the Herald Square store than an office tower and neighborhood revitalization.

(Bloomberg)—Jeff Gennette, the chairman and chief executive officer of Macy’s Inc., knows people are talking about his big bet on New York City. And that they might even think he’s out of his mind.

This month, Gennette said he’s still committed to building a multi-billion-dollar skyscraper atop the company’s Herald Square flagship — plans that city officials, developers and the retail industry thought the pandemic might force him to scrap. He also said Macy’s would invest $235 million in the area surrounding the store.

The projects, as Gennette envisions them, will convert a thoroughfare marked by unpleasant transit hubs and 99-cent pizza shops into a gleaming, pedestrian-friendly, urban oasis dedicated to American style and consumption.

Yet a lot more is riding on Gennette’s blueprints than an office tower and a neighborhood revitalization. As New York City begins to reawaken after 14 months of Covid hibernation, Gennette sees a Macy’s rebound as dependent on the city’s comeback, and vice versa.

Macy’s fortunes have long been tied to the vitality of the city that is home to its best-performing store and most valuable real estate. The largest department store in the U.S., the Herald Square mothership sits at two of the busiest pedestrian intersections in the country. It already spans 2.5 million square feet — slightly bigger than the Louvre in Paris — with an eight-story sprawl of handbags, dresses and home goods that lure locals and visitors from around the world. The new tower would add an additional 1.5 million square feet of office space.

Becoming a real-estate developer may well be Macy’s best survival strategy. Department stores and the malls they anchor are in freefall across the U.S. When Gennette assumed the top position in 2017, the company was already thinking about ways to monetize its real estate in some places and cut its losses in others.

In a restructuring announced before the pandemic struck, the company said it would close 125 of its then 525 stores. It also abandoned a second home base in Cincinnati and closed a digital division in San Francisco. New York is Macy’s sole headquarters now.

Getting city officials to back the developments will be a grueling process, one that tripped up Amazon.com Inc. two years ago. Gennette’s timing isn’t the best, either. Like other urban centers, New York has seen an outflow of residents, a spike in gun violence, a decline in property tax revenue and a tsunami of restaurant and small-business closures from the pandemic.

Just 17% of workers were back at their desks in the New York metro area as of May 19, according to Kastle Systems. It’s an open question if the 1.6 million commuters who once streamed into the city every day will return in force.

Macy’s also suffered acutely. Net sales fell almost 30% in the fiscal year ending Jan. 30, compared with the prior year, and the company was dropped from the S&P 500 index. To keep the lights on at headquarters, Gennette raised $4.5 billion in new financing, furloughed store workers and laid off nearly 4,000 corporate staffers.

One analyst who follows the retail industry questions the new real-estate strategy. “It just seems like their priorities aren’t where we would want to see them in terms of a company that’s trying to execute a turnaround,” said Camilla Yanushevsky, senior equity analyst at CFRA Research.

Recently relaxed rules on masks and social distancing and the return of Broadway theaters in September have spurred optimism around the city’s rebound. Still, some urban experts question whether the shifts to remote work and online shopping will remain permanent, reducing the need for another office tower, let alone an enormous department store.

“There’s been a lot of conversations about, hey, do we need more office space in the city right now?” said Gennette, 60. “This is the long play.”

The CEO brimmed with confidence as he sipped coffee in the same oak-paneled room on the 13th floor of Macy’s headquarters where the 1947 movie, Miracle on 34th Street, was filmed. Gennette has been coming into the office regularly, in a blazer but no tie, commuting from his home in Brooklyn between trips to regional stores.

He’s looked over 3D models of his gleaming glass tower and how it’ll reshape the skyline, as architects work on the final design. He has begun talks with developers, though Gennette wouldn’t say which ones or how much the project would cost. They’ve not yet struck a deal.

In recent years, with new developments like Hudson Yards and renovations to Pennsylvania Station, the subway and train hub a block away, Midtown Manhattan’s center of gravity is moving south toward Herald Square, Gennette said. If he’s to take advantage of that shift, he’ll need to clear many hurdles, including the city’s multiple layers of rezoning red tape. He’ll also need to assuage clashing community interests, ranging from neighborhood activists and small businesses to environmental groups and unions.

“With a project of this magnitude,” said Howard Weiss, senior partner and chair of the land use group at law firm Davidoff Hutcher & Citron, “there’s certainly going to be opposition out of the gate from local residents.”

One question mark is whether the pandemic has changed officials’ mindset away from adding more light-blocking skyscrapers and toward creating more open, green spaces and recreational areas. “The barriers are getting our city government back up and running again and asking questions about how and what some of our new priorities are in the post-Covid age,” said Keith Powers, a Manhattan city council member.

The upcoming mayoral election is another wild card. Macy’s has been prepping its pitch for four years, during which it’s been in discussions with Mayor Bill de Blasio’s office. Soon the company will have to start afresh with a new city chief, possibly one who favors less development and more regulation and taxes. Developers “get an inordinate amount of subsidies and grants,” said Dianne Morales, a candidate who’s trailing in the polls yet who echoes a sentiment that runs deep in the city.

Then there’s the matter of whether New York City needs another massive office tower near the Hudson Yards complex where financial and tech companies have already relocated.

New York’s skyscrapers have been mostly empty since last March. Office availability hit roughly 79 million square feet in the first quarter of 2021, the highest in at least three decades, according to brokerage firm Savills. Large employers may opt not to force workers to commute into the city. That could mean fewer shoppers and less demand for new towers.

Better-heeled companies have tried to do massive developments in the city — and failed. In 2018, Amazon famously announced it would build its second headquarters in Long Island City, across the East River in the borough of Queens, after negotiating billions in government subsidies.

The e-commerce giant soon abandoned those plans due to public outrage over the financial carrots the tech giant had received. Community activists also worried that a gleaming new tech campus would overwhelm local services and schools and cause rents to jump, displacing the area’s blue-collar residents.

The CEO is determined not to let Macy’s get Amazoned. The company is mum on whether it’s seeking tax incentives for its project, though Weiss from the land-use group said he presumes “there's been discussions in terms of what tax incentives” might be available for a project so significant to the future of the store and the crossroads where it sits. Gennette instead prefers to talk up the $235 million investment to improve public spaces in the area.

For now, Macy’s first-quarter performance justifies his optimism. Sales outpaced Wall Street’s expectations, leading the company to raise its earnings forecast for the year. Comparable-store sales, a key retail metric, soared 62.5% for company-owned locations from a year ago.

Rising vaccination rates and stimulus checks are motivating Americans to go shopping again. Foot traffic in the Herald Square store has been picking up — in mid-May it was about three-fourths the level of February 2020, before the city went on lockdown.

Gennette has worked at Macy’s for 37 years, almost his entire adult life. By the time he moved to New York in 2009 as the retailer’s top merchant, he’d seen Macy’s go through several iterations, including the 2005 merger of Federated Department Stores, which then owned the Macy’s brand, with May Department Stores in a $17 billion deal.

To help cement his legacy and win support for the projects, Gennette plays the history card: He notes that Macy’s is no Johnny-come-lately, having opened its first store in the city in 1858, before the Civil War. The iconic Herald Square store has been there for almost 120 years. The project he’s pitching to investors, city officials and the nearby community is about the next 100 years.

The developments, he claims, would do as much for New York — generating $269 million in annual tax revenue while spurring $4.29 billion in economic output annually — as they would for Macy’s. That, of course, assumes the office market has rebounded by the time the Macy’s tower is built, which is likely several years away.

Developers and brokers echo Gennette’s talking points. They say newer towers located near transit hubs will fare better than older stock during downturns. Marquee tenants already are gravitating toward higher-end sites. Facebook Inc., for example, during the pandemic signed a giant lease at Vornado Realty Trust’s redevelopment of the Farley Building by Penn Station. Apple Inc. has also increased its presence at a nearby office tower, 11 Penn Plaza.

Gennette said he’s aware of all the pitfalls. He’s wagering that New York will roar back to its pre-pandemic glory and that the office tower will be the icing on his cake, channeling thousands of workers to the department store just an elevator ride below their cubicles.

“This is what the next decades look like,” he said. “And anytime you bet on New York City, it’s a safe bet.”