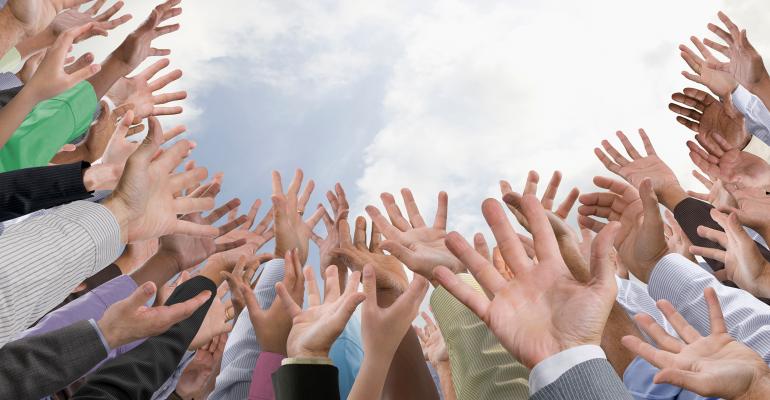 “You have investors like sovereign wealth funds coming in and taking the entire stack,” says one industry insider.

Bond investors are hungry for CMBS, and they’re gobbling up entire tranches, from the top of the credit stack to the bottom. But they have a picky palate—they’re not interested in pandemic-weakened property types.

“Demand is terrific,” said Manus Clancy, senior managing director at Trepp LLC. “With interest rates so spectacularly low, CMBS is one area where investors can still get some spread over the 10-year curve.”

The composition of bond investors hasn’t changed much from previous years—it’s still the same institutions and money managers that have always played in this market. The big difference is the amount of capital they have to deploy, according to Edward L. Shugrue III, managing director at New York-based RiverPark Advisors LLC and portfolio manager for the RiverPark Floating Rate CMBS Fund.

Because COVID-19 dampened CMBS issuance last year, billions of dollars ended up unallocated and sitting on the sidelines. Add that to regular annual inflows, and suddenly, the bond market is flooded with capital.

Related: CMBS Investors Likely to Get Dinged by Non-Recourse Loans

And that doesn’t even take into account the increased capital that investors are allocating to real estate. Because of the growth in the stock market over the past several years, most investors are rebalancing their portfolios with an eye toward alternative investments, including real estate.

Industry experts expected 2020 to be a banner issuance year for CMBS, but the COVID-19 pandemic froze the market. It didn’t take long for it to thaw, though—issuances resumed in May, in part because of the Fed’s swift initiation of the Term Asset-Backed Securities Loan Facility (TALF) program. In contrast, the CMBS market remained frozen for nearly two years during the Great Financial Crisis.

“Spreads really took off in April 2020, just like they did during the Great Financial Crisis,” Clancy noted, adding that spreads on AAA bonds jumped 250 basis points and those on BBB- jumped 800 to 1,000 basis points. “If TALF had not kicked in, borrowers—even those with sought-after properties—would have had to refinance at much higher costs, and we would have seen a much longer slowdown. TALF was critical in helping the market get back on its feet very quickly.”

At the end of 2020, Kroll Bond Rating Agency (KBRA) expected this year’s issuance to reach only $60 billion, but strong activity during the first four months of the year compelled it to reevaluate its forecast. Now, the agency is forecasting private-label CMBS issuance to exceed $110 billion this year.

Last month, 14 private-label CMBS deals totaling $10.6 billion were priced, bringing the year-to-date total of private-label issuance to $25.7 billion, which is 20.8 percent higher than the same period last year, according to KBRA.

The $817.1 million MSC 2021-L5 became the third conduit offering to price in April, according to Trepp. AAA spreads for the MSC deal settled at S+73, in line with the S+75 for the WFCM 2021-C59 deal earlier in the month. Lower down the stack, BBB- spreads for the deal settled at S+325, tighter than the S+345 and S+370 range for the previous two conduits that came to market in April.

“Except for a few weeks last month [when interest rates moved sharply], the market has been very steady and has continued to tighten,” Sansosti notes.

Historically, conduits dominated the vast majority of CMBS issuance. Over the past few years, however, they’ve accounted for a smaller percentage of the overall market. At the same time, the single asset/single borrower (SASB) market has expanded substantially.

“SASB has been a real bright spot throughout the pandemic,” says A.J. Sfarra, managing director of commercial real estate securitization and capital markets at Wells Fargo.

Eleven SASB deals totaling $7.7 billion were priced in April, making it one of the most active months on record, according to KBRA. For the first four months of 2021, SASB issuance stands at $16.9 billion, an increase of 76.1 percent from the same period last year. KBRA is projecting annualized issuance of $50.8 billion for the full year.

The SASB market is particularly attractive for borrowers with pricey trophy properties and large portfolios of high-quality assets. Moreover, SASB executions are currently the best execution for large transactions.

To that end, private equity giant Blackstone and global asset management firm Brookfield are the dominant players in the SASB market, according to Robb Paltz, associate managing director with Moody’s Investors Service’s CMBS group. In 2019, for example, they accounted for roughly one-third of total SASB issuance.

While the SASB market (particularly floating rate) has been very liquid over the past few months, leading spreads to tighten dramatically, conduit lending is getting pressured by competition and on asset type.

“You’ve got life companies, GSEs, banks, and bridge lenders all chasing loans and offering competitive rates, and when you factor in hotel and retail, you’ve lost about 20 percent of what you would usually have in conduit,” Sfarra explained.

Bond investors are looking for CMBS issuances that are perceived to be lower risk, and right now, there’s still “a lot of anxiety and uncertainty” surrounding lodging, non-essential retail and office properties, according to Joseph Baksic, associate managing director with Moody’s Investors Service’s CMBS group.

The lack of investor interest in these asset classes has made it more difficult for originators to create CMBS pools. However, there’s plenty of investor demand for CMBS pools with industrial, essential retail, multifamily, life sciences and even self-storage.

After a volatile 2020, RiverPark Floating Rate CMBS Fund repositioned its portfolio into industrial, life sciences and apartments. The fund didn’t own any retail coming into the pandemic, and it traded out of hotel and office, Shugrue says, adding that he thinks business travel is “really compromised” and office buildings in secondary and tertiary markets will suffer “permanent value impairment.”

Looking forward to the second half of 2021, Sfarra is keeping an eye on interest rates. “The 10-year Treasury has been a little choppy, and that rate volatility spooks people,” he notes. “If you look at issuance, there’s so much floating rate issuance and demand from investors who are biased to stay short because of rate volatility issue and an inflationary view.”

Clancy, meanwhile, is more concerned about TALF, which is buying about $120 billion worth of bonds a month. “People think the Fed will start tapering TALF in the next six months, and even if it’s gradual, there will probably be a spike in lending spreads,” he says. “If it’s not gradual—if they stop it all together—it will have a more deleterious effect on issuance.”