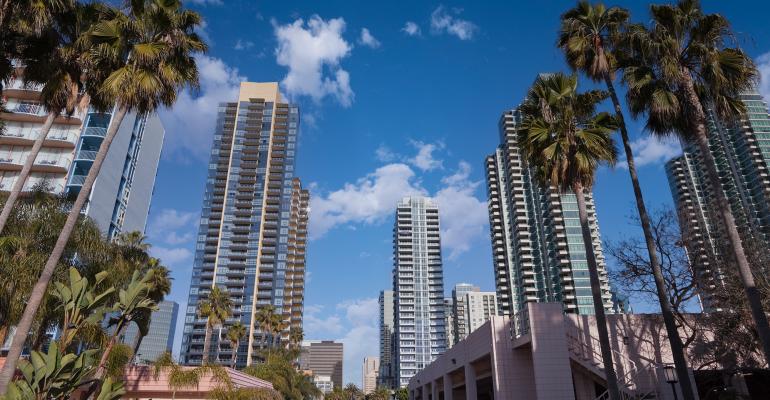 Anatomy of a Deal: Why Regent Properties’ Fund Invested in San Diego’s Downtown

San Diego is the starting point for $2 billion in office acquisitions by Regent Opportunity Fund V.

Right now, real estate investors are expecting some secondary office markets to recover faster than those in gateway cities and to consequently provide higher rent increases and valuation growth in the near term. The secondary markets that are most likely to benefit from that trend are those boasting economic diversity, high population growth and the in-migration of well-educated science, technology, engineering and mathematics (STEM) professionals, along with other millennial white-collar workers.

San Diego is one of those markets, according to Sam Kraus, executive vice president and head of acquisitions at Los Angeles-based Regent Properties, a real estate development and investment management firm. In Kraus’ view, San Diego is emerging as a gateway city, with the strongest relative value compared to any other tier-one location on the West Coast. However, San Diego is not the only office market that Regent envisions as an up-and-coming gateway city. Over the next 24 months, the firm plans to invest a total of $2 billion in office properties in Dallas-Fort Worth, Houston, Phoenix and Denver, according to Regent Properties CEO Eric Fleiss.

Regent Properties manages a variety of investment vehicles, including comingled funds and separate accounts on behalf of an institutional client base. The firm recently acquired a portfolio of four high-rise office buildings in downtown San Diego through its Regent Opportunity Fund V for $420 million, or $281 per sq. ft.  The deal, which comprises 1.5 million sq. ft. and represents 16 percent of the downtown market’s class-A and -B office inventory, included 1 Columbia Place, 2 Columbia Place, 701 B Street, and 707 Broadway, as well as a parking garage at 6 and A streets.

“We have conviction in the pending economic recovery and growth coming out of the pandemic,” Kraus says. “There has been a lot of hiring, and we believe it needs to find a physical home as tenants and their employees gain comfort and find value in returning to the office. San Diego’s economic engine is strong and diverse, with life sciences and technology leading the charge.”

The transaction has made Regent Properties the second largest landlord in downtown San Diego, according to Derek Applbaum, first vice president in the San Diego office of real estate services firm Colliers Internationl.  “While this was the largest transaction in over a decade, the lower basis that Regent Properties is in for will provide the needed time (for lease up) with the current vacancy and availability in the market,” Applbaum says, noting that office vacancy in the downtown market is currently at 21 percent, with overall availability at 30 percent.

Currently, all of the four buildings Regent Properties bought have vacancies above 25 percent, according to Ben Tashakorian, senior managing director of investments in the San Diego office of real estate services firm Marcus & Millichap. He notes that these building have leasing challenges due to location, orientation and parking issues. But all in all, he says it was a great buy for Regent, as the price paid is well below replacement cost, which is currently $500 per sq. ft. This should allow the new landlord to be comfortable with offering rents of $3.50 to $4.0 per sq. ft., compared to $5.0 per sq. ft. that is the asking rate for new product in the city.

Additionally, Tashakorian says the deal provides Regent with an advantage the previous owner didn’t have in attracting and retaining tenants from the wider San Diego area. He explains that similar to Kilroy Realty and The Irvine Company, Regent is a strong West Coast real estate investor with multiple properties in San Diego County, which should allow it to cut deals with tenants that want to make a lateral move to a different submarket or expand their existing space.

While Regent invests in a wide range of institutional-quality office assets, it frequently targets properties in a transitional state that require hand-on execution to help renovate the property, increase occupancy and stabilize the income profile, according to Kraus. “We are generally in the business of growing income streams and stabilizing rent rolls,” he says.

“In this case, the execution strategy hinges on repositioning vacant space to be more lease-ready, enhancing the buildings’ amenity sets, and focusing on operational excellence and tenant engagement to increase occupancy and maximize tenant retention.”

He adds that Regent Properties’ hold periods vary from four to seven years, depending on a particular asset’s investment profile.

Prior to Regent stepping into the picture on its latest San Diego portfolio, the previous owner, New York-based Emmes Asset Management had completed a renovation of the properties’ common areas and some outdoor amenities, according to Applbaum. Regent plans to augment those renovations with a $60-million investment over the next five years to add hospitality-like amenities, including outdoor spaces, eateries and fitness centers.

Today, the four purchased properties cater mostly to traditional office tenants—law firms, financial services providers, insurance and real estate services, government entities, and media and technology companies. “We believe these industries have a stable position in downtown San Diego, and many such businesses have been growing and hiring in recent months,” Kraus says. But he notes that current development and investment activity in the downtown market also influenced Regent’s decision to invest here.

“Generally speaking, we think they will be successful, and thereby continue to bolster the live-work-play dynamic triggered by downtown San Diego’s renaissance. There are some major pending developments, with significant investment behind them, that are well-positioned to bring life sciences industry participants downtown.”

Highlights of San Diego’s current development projects include the Manchester Pacific Gateway in the Marina District and redevelopment of East Village.

The entitlements call for 1.3 million sq. ft. of mid-rise commercial buildings, a museum and three acres of green space, among other components. The first phase of the development, which includes two office buildings with massive amounts of lab space, is scheduled for completion in 2023, reports the San Diego Tribune.

The East Village, a blighted downtown district on the San Diego waterfront, is also undergoing a continuing redevelopment effort. The University of California San Diego will open a downtown campus this fall at Holland Partner’s newly developed Park & Market mixed-use project in the area. The development underway here is expected to create 15,000 new jobs.

East Village includes the five-block Makers Quarter, which will provide 250,000 sq. ft. of retail; 812 residential units and 1 million sq. ft. of creative office space. There is also the 35-block I.D.E.A. District in the Upper East Village, a design-tech innovation hub.