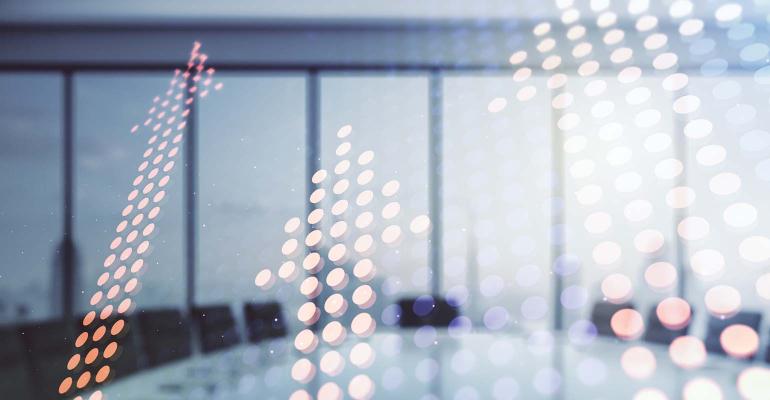 Latest research from WMIQ and Pershing highlights how financial advisory firms are building teams to meet their own expectations for growth in 2023, despite the economic and market head winds.

As the clock winds down on the year, wealth management firms are looking to the future seemingly unfazed by economic head winds and making plans that include adding staff and creating new roles, according to research from WMIQ and BNY Mellon | Pershing.

Next: The Wealth Management Firm of the Future is a multifaceted look at wealth management firms of the future—how they’re growing, what they’re prioritizing and, in an end-of-year update released this week, what roles are being sought and where talent is being sourced.

Related: Next: The Wealth Management Firm of the Future

Nearly a quarter of firms expect to double in size over the next five years, according to a survey of 453 respondents conducted in the spring, and more than half expect to grow by at least half. Comparatively, 44% of them grew by 50% or more over the last five years. Even a fraction of the expected growth will require significant additional staff in an industry that is adding hundreds of new firms every year while already experiencing a painful talent shortage.

“That need to create capacity and bring new talent is one of the game changers as we look at the next decade for wealth management,” said Mark Bruno, managing director of Wealth Management at Informa Connect, the parent company of WMIQ and WealthManagement.com. Adding new talent, he said, "is absolutely an area where a lot of firms have invested and will continue to invest moving forward."

Registered investment advisory firms comprise 27% of 249 respondents to a supplementary staffing poll conducted in September/October. A fifth were affiliated with independent broker/dealers, and insurance companies, banks and trust companies made up another 20%. Just 2% of responses came from the wirehouse sector, while regional brokerages, hybrid firms and “other” comprised the remainder.

About half of the sample is under the age of 50, and one in three is a woman. Nearly three-quarters are from firms with fewer than 50 full-time employees, while 6% have more than 5,000.

While most firms saw assets decrease this year, nearly half still added staff—57% of firms under 50 and 37% of those over 50. Only 9% of all firms downsized, while 43% saw no change. Support roles were in greatest demand, followed by advisors, specialists and leadership roles. Firms under 50 hired more core capabilities, such as planning and portfolio management, while the elder cohort was hiring for more business development and marketing roles.

Marketing associate was the third-most-common role added by responding firms in 2022, even after the earlier survey revealed most don’t consider marketing technology or digital marketing strategies to be significant contributors to growth. 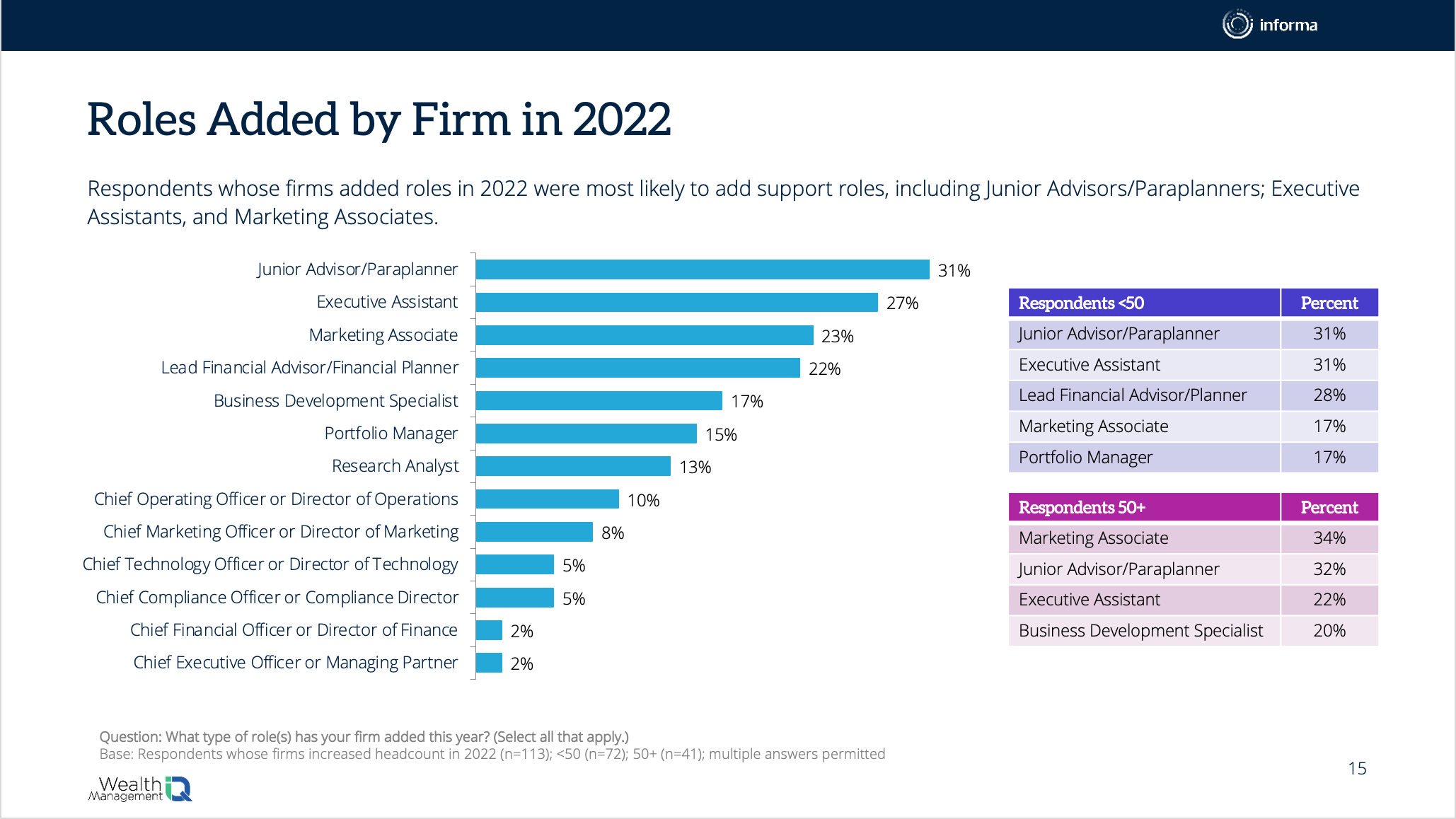 “I believe that only 14% of advisors are leveraging digital marketing today because there is a lack of awareness of the opportunity that digital marketing provides,” offered Meg Carpenter, CEO of public relations firm FiComm Partners. “Digital marketing is the most effective way for advisors to meet consumers where they are (online and on mobile) in a human-first and highly targeted way.”

Half of responding firms are seeking talent in the coming year: 28% are adding entirely new roles, while 24% are solving for attrition, and 11% said they’re hoping to replace an existing employee.

More than a third are looking to add a new junior advisor/paraplanner position, and a quarter are looking for an executive assistant, followed by lead advisor (19%), business development specialist (18%), research analyst (17%) and marketing associate (13%). The rest of the list comprises chief officer roles or their equivalent.

“This is not just bringing in roles to help drive growth and support G1. This is actually sort of building and breeding the next generation of financial advisor,” said Lisa Crafford, Pershing's head of business development during a fall webinar discussing results of the study. “I see this industry as only getting larger and larger if we can find the talent because there is a concerted and almost a universal effort to bring in more of these positions.” 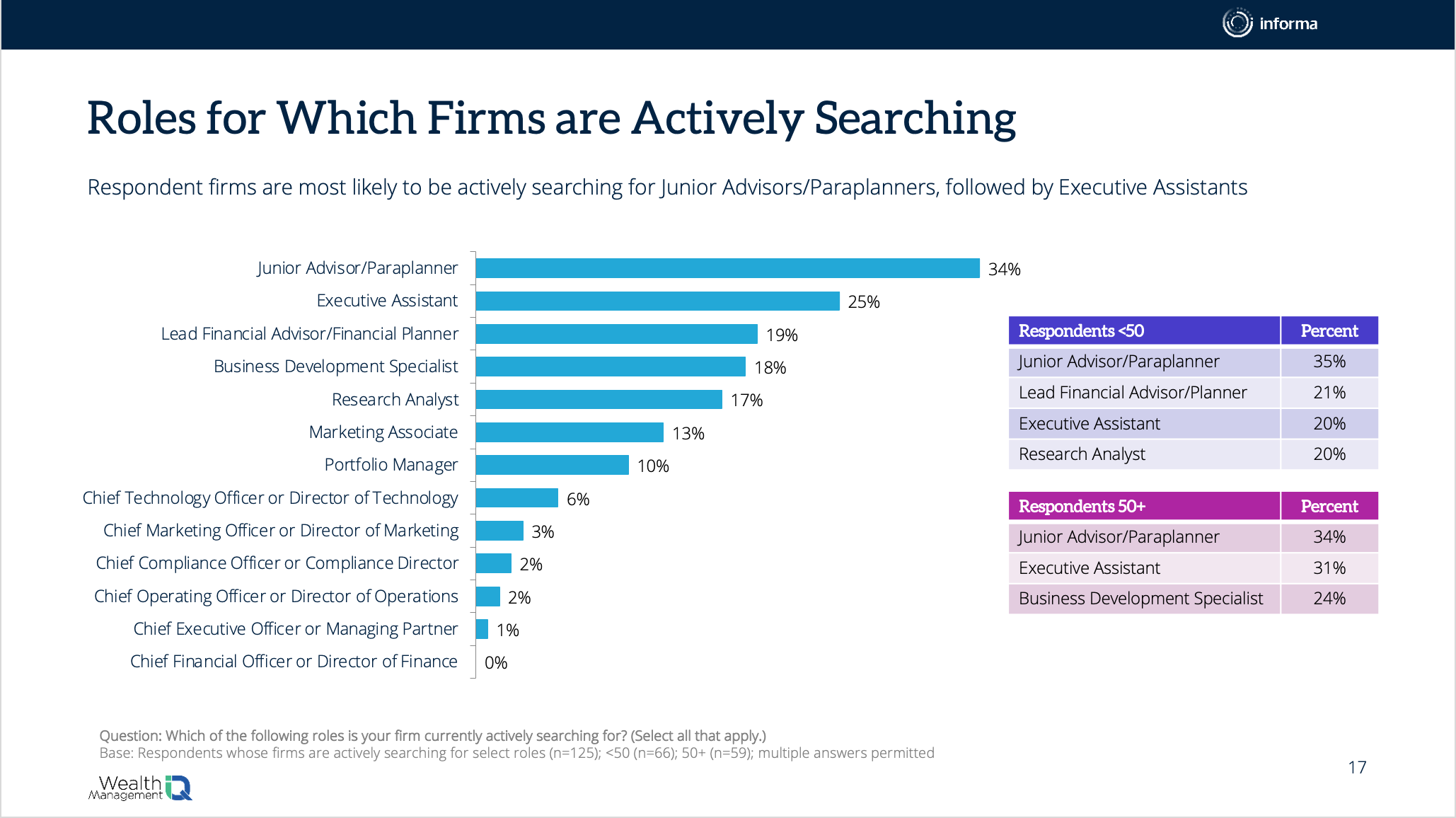 While school and CFP programs are becoming more widely available and many of the more enterprising and well-heeled firms have implemented their own training programs in the universal effort to attract and retain next-gen talent, Crafford suggested heading down to the local library, bank or diner and scouting employees that consistently provide an excellent client experience—the No. 1 priority identified by firms in the spring survey.

“And then teach them,” she said. “That's how we're going to find the talent because I think we get a little bit hung up sometimes on whether they know the difference between a 401(k) and an IRA. Well, guess what? They can learn those things and we can teach those things. But what we need to do is go look for the people that are eager to learn. ... and there are so many new roles being added that you can find a place for a lot of these folks.”

The “long play,” she added, is creating more awareness of the career path in early education. “I think it's up to each and every one of us to get out into our schools, into our communities, whether you have children or not, and engage with elementary, middle and high school students, teach them some basic financial literacy and show them that this incredible career is out there for them and teach them what we do.”

Sixty-one percent of existing advisors reported being approached by competing firms about potential job opportunities, with younger professionals reporting more interest, and 92% of those said they’ve been contacted by multiple firms. Only 23% indicated they would consider leaving, however, including 12% that said they might exit the industry altogether.

For a deeper look at compensation trends in the RIA sector, see this recent Schwab Advisor Services study.

The Pershing/WMIQ study and other research topics can be found at the WMIQ page on the WealthManagement.com website.