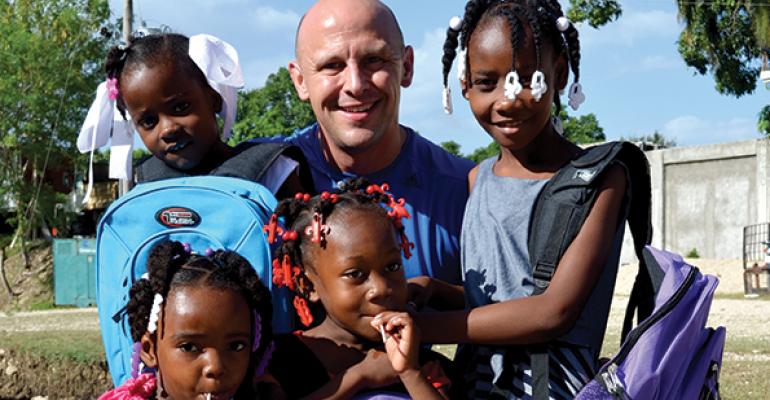 In 2006, a family friend of Raymond James advisor Tyson Ray was looking to adopt a baby named Keeley from a woman in Chicago who couldn’t take care of her. Ray’s friend—a youth pastor—and his wife were unable to have kids. Adoption was a good alternative, but prohibitively expensive until Ray offered to help the family fund the $20,000 cost.

“So when Keeley was bouncing on my lap about six months later and I’m realizing what we did and how this child’s life is going to be changed forever, it changed my definition of what success is,” Ray says. “Sometimes in this business we get so caught up in money and what people have and what people are trying to have, and in that influence you can almost have your own perspective changed a little bit.”

In 2011, Ray and his wife launched Children’s World Impact (CWI), a nonprofit aimed at breaking the cycle of poverty among orphans and widows. The organization has ongoing projects in Haiti and Ghana.

In northern Ghana, for example, the organization started by building a well in the middle of seven villages. The nonprofit then put in a mill where women can grind shea nuts to make shea butter, used mostly for cooking oil. Ray also raised money to buy institutional baking equipment so women could efficiently make bread, another item they can sell or barter. Next to the well are small chunks of land that the widows use to grow crops.

So-called “social entrepreneurship” is a popular concept in philanthropic circles today. The notion of using charitable resources to launch market-driven enterprises is seen as more sustainable and effective than blind donations. “It’s basically given this whole area this little economic lift that it hadn’t had before,” Ray says.

In Haiti, CWI built a school in 2012 for 100 kids at a nearby orphanage. But about 300 kids in the village also wanted to attend, so the school now serves about 400 children. The group also funded a boys’ home, to separate the older girls in the orphanage from the older boys. Since 2011, Ray has gone to Haiti 10 times, including four medical missions that treated 2,000 patients.

The projects are funded through four annual events: a golf outing, a women’s tea party, a casino night and a food-packaging party. In the last four years, CWI has sent 750,000 meals to Haiti and raised $700,000 for its causes.