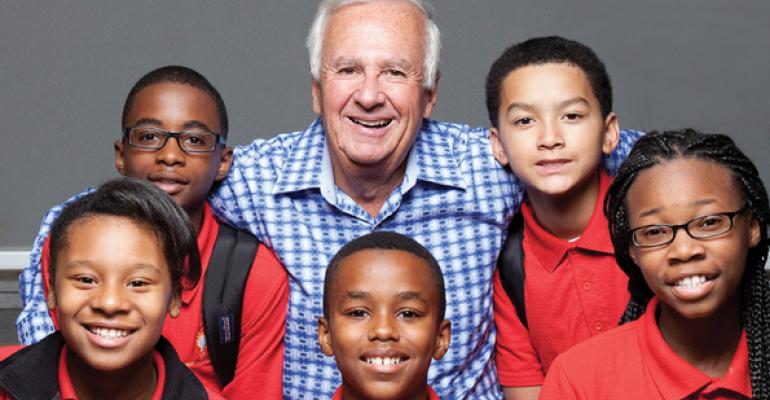 A Wisconsin advisor’s mission started 18 years ago with a simple “60 Minutes” episode on teacher Marva Collins, who gained fame in the ’80s and ’90s for succeeding where Chicago’s public schools were not—effectively teaching impoverished, at-risk students from the poorest parts of the city, many of whom were misdiagnosed as learning disabled.

Encouraged by her success, Ronald Sadoff visited Collins’ Westside Preparatory School and hammered out a franchise agreement with Collins to launch the third Marva Collins school in Milwaukee.

From there, armed with the mission that “knowledge plus character pave the road to college and beyond,” Sadoff invested his own cash to open the 36th Street Campus, a nonprofit charter school, in the fall of 1997. The K-8 school aimed to instill goal-setting skills in its students, as well as building up their self-esteem.

“The only way you’re going to significantly reduce poverty is to put great schools in urban areas,” Sadoff says. From that first effort, the program has grown into four schools, with the newest, the Lola Rowe North Campus, opening this fall.

The schools are a success, with test scores of MCPS students regularly outpacing the national average. And about 95 percent of MCPS students graduate high school, compared to an average high school graduation rate of 55 percent among the city’s urban African Americans. Moreover, 33 percent graduate from college, compared to 8 percent of the city’s overall African American student population, Sadoff says.

“It’s about doing whatever it takes,” Sadoff says, adding that the teachers will take their students to get haircuts and clothes, and visit them in the hospital.

Today, Sadoff serves as president of the board of directors, where he focuses on finding money to fill the $650 gap between state funding and the actual cost per student. “If you want to run a great school, you’re going to lose money,” he says. He spearheads fundraising—taking potential donors on tours of the schools—and helps with financial management and guiding the purchasing of new buildings.

“It’s a love,” Sadoff says of his ongoing commitment to the schools. “It’s a high to go there.” The best part, Sadoff says, is when the children and parents get behind the school’s mission. “Parents see their kids want to go to school and learn.”