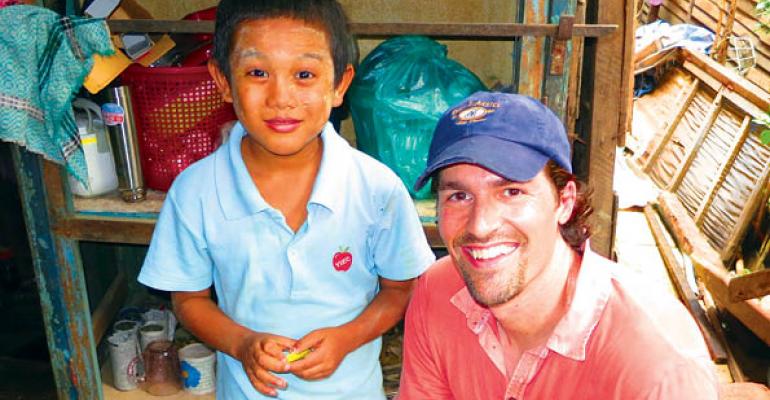 “Kids don’t have any options; they have no choices. They can’t ‘work a little bit harder’ to make things better.”

That’s what propelled Robert Pagliarini to travel over 7,000 miles to visit Molocabac Island—three tiny Filipino islands located south of Manila. On behalf of The Band of Brothers, the charitable organization he co-founded with two other Californians, Robert returned this past September to visit Molocabac’s families—most of whom lost their homes during Typhoon Haiyan in November of 2013.

“We’d been working with that struggling village for a couple of  years before the typhoon hit,” Robert says. “Then, Typhoon Haiyan came and destroyed practically everything.”

After the typhoon devastated Molocabac, The Band of Brothers sprung into crisis mode, supplying food and water and rebuilding the island’s school and homes.

But, Robert and The Band of Brothers don’t limit themselves to “doing good” only for children living in the Philippines. They’ve partnered with local organizations in Vietnam to support orphanages, providing food, clothing and shoes for their residents. In Thailand, they’ve built a waterproofed children’s home and stocked it with clean beds, pillows, shelves and a water tank. They’ve donated money to build and fund schools in Cambodia and Myanmar.

“We find local partners who are super passionate, provide them with money and try to bring entrepreneurism to the facility itself. We try to help them see that they can be bigger than they are,” Robert explains. “While people are better off immediately with money, they’re far better off if they get skills and learn how to invest in and maximize their human capital. Once we make sure they have food and are safe, our focus becomes helping people in these communities become self-sufficient.”

Self-sufficiency is a skill Robert learned early on in his life. When he was 5 years old, Robert’s father left his mother, so she alone cared for Robert and his four siblings. Putting food on the table wasn’t easy. Robert went through school with the goal of becoming a psychologist. In 1996, to finance his intended graduate school education, he started working in a brokerage firm. “It was exciting to learn about investing and Wall Street,” Robert recounts.

He pushed off graduate school (but ultimately obtained masters degrees in both financial services and psychology) and worked his way up in the company. Loving the financial services environment, Robert joined an investment firm in 2002, and in 2006, he opened Pacifica Wealth Advisors, a boutique wealth management firm that caters to affluent clients and those who’ve obtained sudden wealth. It was through his work in the finance industry that he met two investors, Troy Mikulka and Eric Snyder—both of whom shared his passion for philanthropy. Inspired by his time as a U.S. Marine, Mikulka suggested the name “The Band of Brothers,” and in 2005, their nonprofit was born. From Robert’s perspective, “The Band of Brothers is different from other nonprofits. We try to be adventurous and fun in our fundraising. But, we always make it about the kids whom we need to help.”

His hope? “We want to teach practical skills to give children an edge. An edge that will be with them forever.”