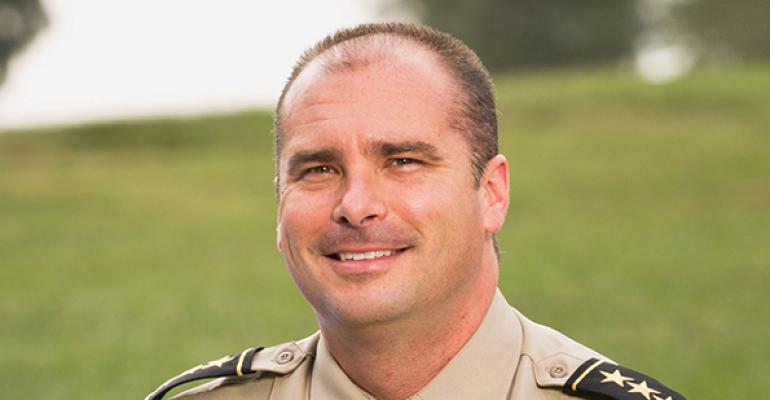 Starting out as a cadet at 18 years old, Brian Douglas planned for a career as a full-time police officer. But life happens and plans change. Ten years ago, Douglas joined what he jokingly calls  “the family business,” partnering with his father and working as an advisor with Ameriprise.

His career track shifted, but his commitment to the community did not. For 10 years he has served as a reserve deputy sheriff and assistant chief with the Shelby County Sheriff’s office. Last year, Douglas logged over 500 volunteer hours, or an average of almost 10 hours a week.

Created in 1965, the reserve bureau requires its officers to go through the same training as full-time deputies. As one of three assistant chiefs for the department, Douglas helps oversee the 135-person volunteer force.

He is directly responsible for overseeing and staffing officers to patrol the county’s parks. In addition, Douglas oversees many of the county events that need a law enforcement presence, like the annual Memphis in May festival. He escorts the University of Memphis’ mascot, a Bengal tiger named Tom, to games and other events. “Many times we’re performing tasks that you wouldn’t want to pay a full-time officer to do, but still need to be done,” Douglas says.

He’s handed out some speeding tickets during his time, and even last month helped evacuate some elderly residents from a home after a violent storm flooded the county’s low-lying areas. But he’s also had some laughs. Several years ago he stopped a young man for underage drinking. While radioing in the information, the teenager slipped off his flip-flops and bolted. Douglas took off in pursuit, catching the kid in the middle of a giant mud puddle.

“I may not be the fastest, but I am determined,” Douglas says. He got his man, but in the process became covered head to toe in a thick layer of cold, wet mud. “I basically had to be hosed off,” he says. It took awhile to live down the incident, he says.

“I enjoy dealing with the public,” Douglas says. “In financial planning, we’re dealing with individuals and couples to solve problems. In the sheriff’s office, sometimes those problems are a little worse, but it’s still about helping people. I enjoy the helping part.”