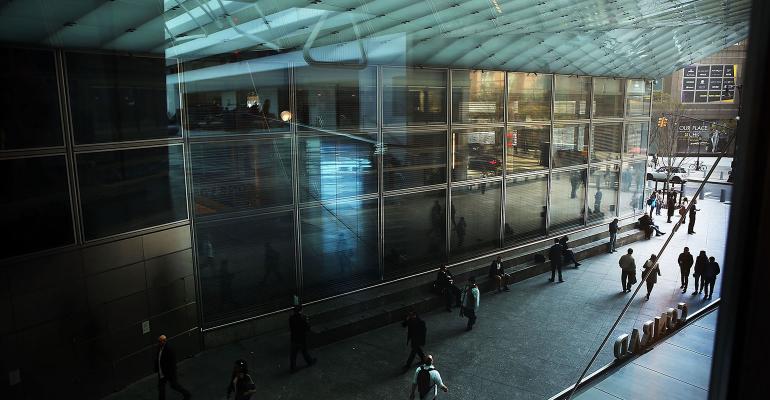 Independent advisors have plenty of reasons to sell now.

(Bloomberg) - Investment adviser deals, once a fragmented backwater of financial services, are surging as Wall Street eyes fees in a business with pricing power.

Mergers and acquisitions involving wealth advisers and brokers reached a seven-year annual high in November, according to data compiled by Bloomberg. That was even before Charles Schwab Corp.’s blockbuster $26 billion agreement to purchase TD Ameritrade Holding Corp.

Wall Street is flush with cash and companies from Goldman Sachs Group Inc. to private equity firms are investing in wealth managers for their stable revenue streams. Founders of advisory firms are seeking successors after years of expansion powered by the historic bull market.

Independent advisers have plenty of reasons to sell now. For starters, offers may vanish when a bear market comes, as revenues are tied directly to assets under advisement, which would drop if stock portfolios shrink.

“Pricing has never been better than it is today for sellers,” said Peter Nesvold, an investment banker with Raymond James Financial Inc. “They take into consideration it’s the 11th year of an expansion. If not now, when?”

This year’s announced M&A deals for U.S. wealth advisers and brokers surpassed $5.9 billion in November prior to the Schwab news, up from 2018’s total $5.5 billion, according to data compiled by Bloomberg. The 79 tie-ups year-to-date as of Wednesday compare with a post-crisis high of 92 during all of 2018.

While there’s a risk of paying peak prices, one reason for the steep valuations is that independent advisers are a rare finance sector that has resisted fee compression as technology squeezes transaction costs elsewhere. Trading and asset management are increasingly commoditized, with brokers offering free trades and index fund fees falling to pennies per $100.

Clients typically pay registered investment advisers, or RIAs, about 1% of assets a year for personalized service such as portfolio construction, estate planning and tax strategies. That compares with Schwab’s revenue on client assets of 29 cents per $100 in its latest quarter. Fintech firms such as Wealthfront and Betterment offer so-called robo advice for next to nothing.

RIAs with $2.4 trillion assets will be potential acquisition targets in the next decade, according to a November report by Cerulli Associates. The key growth driver is aggregators, who account for 3% of firms and 8% of assets. The 10 major RIA consolidators increased assets at a combined 22% compound annual growth rate over the past five years, versus 10% for the business overall.

“Consolidators are amassing assets at a much faster rate than the broader RIA market, which itself has been outpacing other channels,” said Marina Shtyrkov, an analyst at Boston-based Cerulli. “They’re attempting to aggregate this highly fragmented market and create economies of scale and they’re really emerging as large leaders in a market where the majority of firms are still small businesses.”

Private equity is feeding the trend. Stone Point Capital and KKR & Co. are the largest shareholders of Focus Financial Partners Inc., an aggregator with more than $200 billion in client assets that went public in 2018. Oak Hill Capital agreed to buy a stake in Mercer Advisors in September.

David DeVoe, a San Francisco-based consultant who tracks the industry, tallied 101 M&A deals by RIAs in the first three quarters of 2019, compared with 100 in all of 2018.

“The last couple of years, scale and the interest in gaining scale has been the big driver,” DeVoe said. “The marketplace is being stocked with sophisticated strong buyers and that also contributes to this perfect storm of activity.”

Sellers have a menu of options from full buyouts to partnerships with providers of back-office support, a structure that lets them retain their brand and focus on client recruiting or one-on-one advice.

“Consolidation in the asset- and wealth-management industry may maintain momentum next year from a record 2019, amid long-term trends such as fee pressure, the shift to passive from active investing and a need to spend on technology.”

As of year-end 2018, there were more than 17,000 retail-focused RIA firms in the U.S., collectively managing $4.8 trillion, according to Cerulli. It expects firms with $1.6 trillion to participate in deals because of owner retirements, with most sellers transitioning out slowly to prevent a client exodus.

The “perfect guy” to sell was a 59-year-old founder who recently talked about fear of missing out on current prices, according to Rush Benton, head of M&A at Captrust, a Raleigh, North Carolina-based behemoth with $362 billion. Buyers often want owners willing to work years after a sale because ongoing relationships with clients are key to enterprise value.

“The older the founder gets, the less value in the business,” said Benton, who has overseen four acquisitions this year of firms with a combined $7 billion in assets.

Joe Duran, chief executive officer of United Capital, wants to keep running -- and growing -- his advisory firm for a long time. He found a partner with deep pockets and marketing prowess: Goldman Sachs, which paid $750 million in May for his Newport Beach, California-based company. The bank found an opportunity to expand its fee-based services for individual investors.