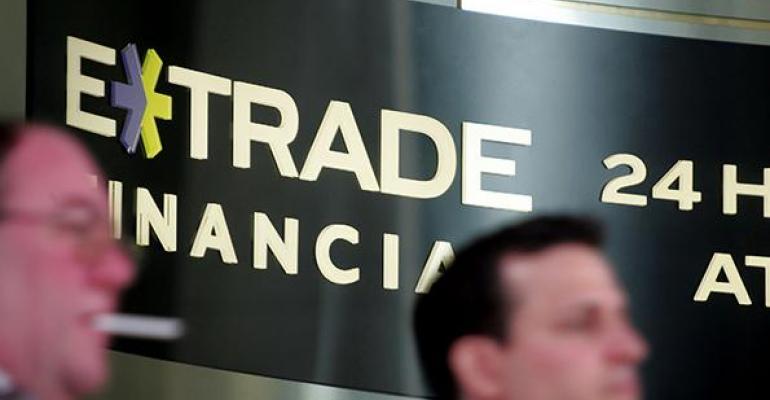 As trading commissions can fall no further, analysts see consolidation on the horizon for the discount brokers and RIA custodians. Will TD Ameritrade buy E*Trade? Who will buy TD Ameritrade?

The trade commission price wars among the discount brokers and registered investment advisor custodians are quickly reaching a stalemate, with all sides having exhausted their powder. Zero commission trades will now be the new normal, observers believe.

So what's next? Wall Street equity analysts who follow the firms suspect scale will become even more important to the firms and expect more M&A on the horizon.

Jefferies analysts Daniel T. Fannon and Gerald E. O’Hara wrote in a note Wednesday that “the long-speculated potential for M&A among the group only intensifies as scale becomes increasingly important. The realities of expense savings via consolidation among the group remain significant.”

William Blair analyst Chris Shutler predicted that the first domino to fall would be E*Trade—and interpreted the fact that E*Trade’s shares fell only 16% Tuesday (versus a dip of 26% for TD Ameritrade and 10% by Schwab) as evidence that the Street was already pricing this potentiality into the company’s share value. He expects E*Trade to follow its larger rivals in the commission-cutting game. (Editor's Note: It did.) The firm was looking at a sale last fall, he noted, but concluded not to go through with it. E*Trade RIA custodial platform TCA by E*Trade recently launched a partnership with Edelman Financial Engines to send referrals to the advisory firm.

Shutler identified TD Ameritrade as the leading candidate to buy E*Trade “given its need to scale up even more and given its ability to take out more costs than any other possible buyer, except perhaps for Schwab.” He added that E*Trade’s corporate services business, which does stock plan administration for 20% of the companies in the S&P 500, would be attractive to e-brokers “and serves as a nice lead generator for the brokerage business.”

But according to Shutler, even a sale of TD Ameritrade wouldn’t be out of the question “given the scarcity of scaled brokerage platforms, the quality of its technology, positioning as the third-largest RIA custodian, and cross-sell potential with either a banking or asset management partner.”

Commissions’ contribution to net income for each of the companies varied; they make up 6% of Schwab’s revenue, 21% of TD Ameritrade’s revenue and 18% of E*Trade’s revenue, Shutler noted. Shutler said that E*Trade would likely follow suit in dropping commissions to zero and absorb a dip of 11% to 14% in revenues.

Analysts agreed that the price wars would cause a significant hit to earnings for each of the discount brokers, but singled out TD as the one that would take the brunt of the blow.

According to Morgan Stanley’s Michael J. Cyprys, Schwab gave guidance to analysts of a $360 to $400 million impact annually, or a 55% impact on its commission revenue line, “which suggests they’re retaining some economics (likely per contract charge on derivates, commissions on international stocks.)”

Shutler said TD Ameritrade’s net income would drop by 32% to 35%.

He has already cut his 2020 earnings estimate for Schwab by 9%, adding that it would take Schwab an extra $150 billion of net new asset growth to recover from the price cut.

Also evidencing the disparate impact on TD Ameritrade, Fannon and O’Hara wrote that Schwab’s move would put nearly 200 basis points of pressure on operating margins, all else being equal, while TD would experience about 500 to 600 basis points of margin reduction and E*Trade would face 300 to 400 bps of compression.

Meanwhile, shock waves from the price wars are bound to reverberate elsewhere, beyond the discount brokerage marketplace and into the brokerage arena, Shutler said, noting that broker/dealers too will have to lower their commission prices to stay competitive.