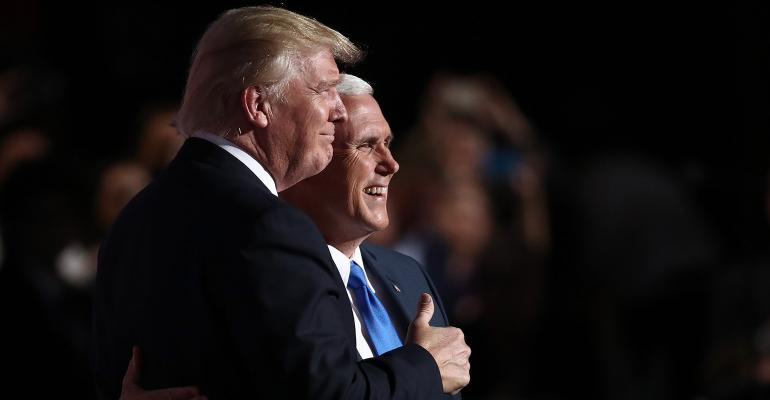 (Bloomberg) -- Wall Street is getting the memo: donating to the Trump-Pence ticket may be more trouble than it’s worth.

The Indiana system works with more than 50 large asset managers including BlackRock Inc., Blackstone Group LP and Bridgewater Associates, according to retirement plan documents. If the firms or employees donate to the Trump campaign, they will likely have to forgo compensation from Indiana for the next two years and possibly face other penalties, according to the rule.

Goldman Sachs banned all of its partners from making contributions to state and local candidates running for office, as well as state or local officials bidding for federal office. As of Sept. 1, every partner is considered a “restricted person” prohibited from engaging in political activities or making campaign gifts to those candidates or officials, according to an Aug. 29 internal memo sent to partners.

“The policy change is meant to prevent inadvertently violating pay-to-play rules, particularly the look-back provision, when partners transition into roles covered by these rules,” the New York-based firm said in the memo. “The penalties for failing to comply with these rules can be severe and include fines and a ban on the firm from doing business with government clients in a particular jurisdiction for a period of at least two years.”

Zurich-based Credit Suisse in July sent a memo to its employees that they need to notify compliance before making any contributions to the Trump-Pence campaign, according to a person with knowledge of the matter. Any donations need to be cleared beforehand, the person said.

Northern Trust, which is based in Chicago, sent an e-mail to certain employees to tell them that the Trump-Pence ticket triggers the pay-to-play rule and that they should be careful not to violate it, according to a person with knowledge of the matter.

Spokespeople for Credit Suisse, Northern Trust as well as Bridgewater Associates, King Street Capital Management and Davidson Kempner Capital Management, which are among the firms that manage money for Indiana’s retirement plan, declined to comment.

ACA Compliance Group, which advises firms including large hedge funds, warned them to "proceed with the highest level of caution before they, or their covered associates, donate to the Trump/Pence ticket," particularly if they work with the Indiana system.

"Even inadvertent violations of the rule can prohibit investment advisers from providing services for compensation for a period of two years," the group said in the notice that was circulated to funds, a copy of which appears on the group’s website. Similar rules also apply to municipal advisers and swap dealers.

The financial industry has been a mainstay of support for Republican presidential and congressional candidates.

Goldman Sachs’s employees and the company’s political action committee have contributed $1.4 million to Republican candidates in 2016, and were the top donor to Mitt Romney’s presidential campaign in 2012, giving the former Massachusetts governor $1 million, according to the Center for Responsive Politics, which studies campaign finance. By contrast, Trump has received a total $3,200 from the Goldman Sachs employees and nothing from the PAC.

While concern over the pay-to-play rule might explain some of the disparity, Trump drew little support from the industry during the primaries, before he named Pence as his running mate.

The U.S. Securities and Exchange Commission enacted the pay-to-play rule in 2010 after a series of scandals involving money managers accused of trying to improperly influence state officials to get investment-management business. Some of that influence included arranging political contributions.

Goldman Sachs’s new policy doesn’t pertain to Hillary Clinton’s presidential campaign since the Democratic candidate and her running mate, Virginia Senator Tim Kaine, are not state or local officials under the SEC rule.

Goldman Sachs already requires all employees to get approval for proposed political contributions, according to a corporate governance statement, to screen for possible violations. The new policy also is designed to minimize damage to Goldman Sachs’s reputation that could be caused by “any false perception that the firm is attempting to circumvent pay-to-play rules, particularly given partners’ seniority and visibility,” according to the memo.