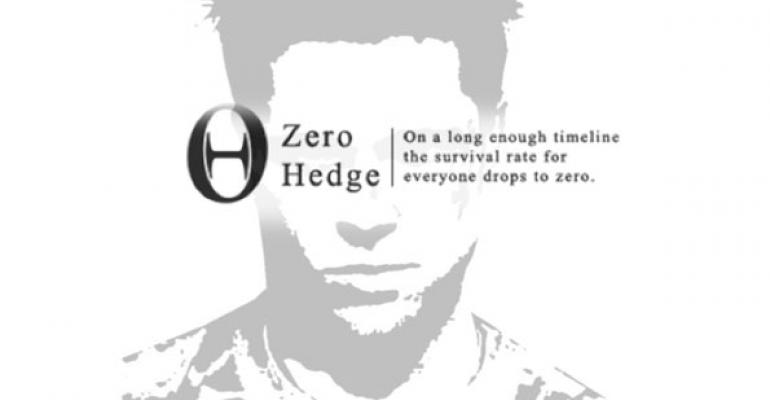 After more than a year writing for the financial website Zero Hedge under the nom de doom of the cult classic’s anarchic hero, Lokey’s going public. In doing so, he’s answering a question that has bedeviled Wall Street since the site sprang up seven years ago: Just who is Tyler Durden, anyway?

The answer, it turns out, is three people. Following an acrimonious departure this month, in which two-thirds of the trio traded allegations of hypocrisy and mental instability, Lokey, 32, decided to unmask himself and his fellow Durdens.

Lokey said the other two men are Daniel Ivandjiiski, 37, the Bulgarian-born former analyst long reputed to be behind the site, and Tim Backshall, 45, a well-known credit derivatives strategist. (Bloomberg LP competes with Zero Hedge in providing financial news and information.)

In a telephone interview, Ivandjiiski confirmed that the men had been the only Tyler Durdens on the payroll since Lokey came aboard last year, but he criticized his former colleague's decision to come forward.

He called Lokey's parting gift a case of sour grapes. Backshall, meanwhile, declined to comment, referring questions to Ivandjiiski. A political science graduate with an MBA and a Southern twang, Lokey said he had a checkered past before joining Zero Hedge. Earlier this month, overwork landed him in a hospital because he felt a panic attack coming on, he said.

“Ultimately we wish Colin all the best, he’s clearly a troubled individual in many ways, and we are frankly disappointed that he’s decided to take his displeasure with the company in such a public manner,” Ivandjiiski said.

Ivandjiiski worked for a hedge fund before being barred by the Financial Industry Regulatory Authority in 2008 for insider trading. He didn’t admit or deny wrongdoing, the agency said. Backshall is a familiar face on financial news networks who has been quoted by media outlets, including Bloomberg. His involvement with Zero Hedge, along with that of Lokey, hasn’t been widely known.The schism between the men sheds light on a website popular among market professionals, one that mixes detailed financial analysis with sensational headlines such as "The Coming War Will Solve Our Unemployment & Growth Problem" and "Exposed—How Two Janet Yellen Phone Calls Saved The World."

Since being founded in the depths of the financial crisis, Zero Hedge has grown from a blog to an Internet powerhouse. Often distrustful of the “establishment” and almost always bearish, it's known for a pessimistic world view. Posts entitled “Stocks Are In a Far More Precarious State Than Was Ever Truly Believed Possible” and “America's Entitled (And Doomed) Upper Middle Class” are not uncommon.

The site’s ethos is perhaps best summed up by the tagline at the top of its homepage, also borrowed from Fight Club: “On a long enough timeline the survival rate for everyone drops to zero.” A paean to populism, the 1999 film is filled with loathing for consumerism and the financial system. Brad Pitt portrays Tyler Durden as hell-bent on bringing down the corrupt system of the global elite—an attitude often reflected in Zero Hedge’s content.

With that in mind, the website has argued that “pseudonymous speech” is necessary amid an atmosphere of stifled public dissent—hence the "Tyler Durden" alias was born. In earlier years, Durden was joined by "Marla Singer," another Fight Club character, as one of the site’s most prominent authors.

“It reminds me of a successful information operation where you mix in the propaganda stories along with other legitimate stories,” said Craig Pirrong, finance professor at the University of Houston. “There are some interesting things on it, and then there are the crazy things.”

Despite holding itself out as a town crier for market angst, transcripts from Zero Hedge internal chat sessions provided by Lokey reveal a focus on Web traffic by the Durdens. Headlines are debated and a relentless publishing schedule maintained to keep readers sated. Lokey said the emphasis on profit—and what he considered political bias at the site—motivated him to quit.

He pointed to the wealth of the Durdens as a factor. Ivandjiiski has a multimillion-dollar mansion in Mahwah, N.J., and Backshall lives in a plush San Francisco suburb—not exactly reflections of Pitt's anticapitalist icon. “What you are reading at Zero Hedge is nonsense. And you shouldn’t support it,” Lokey wrote in an e-mail. “Two guys who live a lifestyle you only dream of are pretending to speak for you.”

Lokey adds: “Durden lives in a castle. If you’ve seen Fight Club, you know how ironic that is.”

A former “director of contributor success” at website Seeking Alpha, Lokey said he joined Zero Hedge for $6,000 a month and received an annual bonus of $50,000, earning more than $100,000 last year. His salary helped pay the rent on a “very nice” condominium on South Carolina’s Hilton Head Island, he said. Despite the compensation, he contends that he left because he disagreed with the site's editorial vision. “Reality checks are great. But Zero Hedge ceased to serve that public service years ago,” Lokey wrote. “They care what generates page views. Clicks. Money.”

Zero Hedge founder Ivandjiiski defended the site, adding that it's designed to be a for-profit entity. “Ultimately, the website makes money, and it’s profitable, which is also why we’ve never had to seek outside funding or any outside money—our only revenue is from advertising, always has been since day one,” he said. “Obviously, every publisher’s mission is to maximize revenue and page views, and we think that we do it in a way that is appropriate.”

Any website's focus on traffic and revenue certainly isn't unusual. But Lokey said he was irked by what he saw as the hypocrisy of Zero Hedge and how it runs counter to its antiestablishment image. In the chat transcripts, Ivandjiiski refers to America's “silent majority” as “beastly,” while Backshall acknowledges life in the U.S. is bad “outside of my bubble.”

Ivandjiiski disagreed with the suggestion that personal worth or lifestyle precluded them from donning the mask of Durden (the character who quipped “the things you own end up owning you”) to deride the prevailing order. “We’ve never said that we are pro-socialist,” he said.

Lokey, who said he wrote much of the site’s political content, claimed there was pressure to frame issues in a way he felt was disingenuous. “I tried to inject as much truth as I could into my posts, but there’s no room for it. “Russia=good. Obama=idiot. Bashar al-Assad=benevolent leader. John Kerry= dunce. Vladimir Putin=greatest leader in the history of statecraft,” Lokey wrote, describing his take on the website's politics. Ivandjiiski countered that Lokey could write “anything and everything he wanted directly without anyone writing over it.”

Working at Zero Hedge was also exhausting, Lokey said, and typically involved early morning starts and writing as many as 15 posts a day of as many as 1,500 words each. The work didn’t stop on the weekends, either. Text messages exchanged between Lokey and Ivandjiiski, screen shots of which were provided by the latter, paint the picture of a work environment that ranged from exhilarating to exasperating.

For instance, Lokey says he's “scared to even ask for an hour off,” while Ivandjiiski replies that “if you ever need time off for whatever reason, never hesitate to just ask.” In February, Lokey says, “I love this company and this website,” and tells Ivandjiiski “you saved my life,” expressing thanks for the job.

By April 2—the day Lokey left Zero Hedge—their relationship had deteriorated significantly, according to the messages provided by Ivandjiiski.

“I can’t be a 24-hour cheerleader for Hezbollah, Moscow, Tehran, Beijing, and Trump anymore. It’ s wrong. Period. I know it gets you views now, but it will kill your brand over the long run,” Lokey texted Ivandjiiski. “This isn’t a revolution. It’s a joke.”