/sites/all/themes/penton_subtheme_wealthmanagement/images/logos/footer.png
Recent
Recent
Seven Tips to Help Financial Advisor Firms Protect their Customer Lists
May 20, 2022
Nine Must Reads for the CRE Industry Today (May 20, 2022)
May 19, 2022
Dondero’s NexPoint Targets More Than $1 Billion for New Wager on Single-Family Rentals
May 19, 2022
SEC Judges’ Constitutional Cloud Darkens After Appeal Ruling
May 19, 2022
Featured
The 10 Best and 10 Worst States in Which to Retire in 2021
Jul 15, 2021
Poll: 15 Classic Books on Investing and the Markets
Apr 03, 2020
Fifteen Must-Listen Business Podcasts for Advisors
Aug 14, 2020
Celebrity Estates: Jay Leno and Planning for Classic Car Collections
Feb 22, 2022
TD Ameritrade National LINC Conference
brought to you by 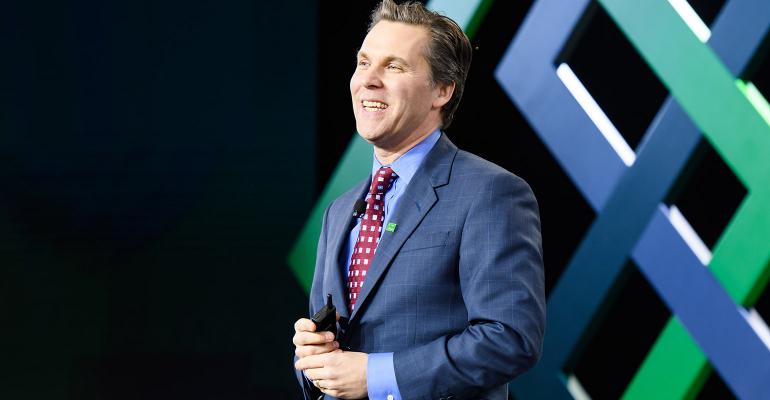 The outlook for the U.S. economy is positive, but predictions come with an asterisk.

A TD Bank economist shared the bank’s predictions for the U.S. economy with advisors at the National LINC Conference this week, but much of the outlook was dependent on fiscal policy decisions yet to be detailed by the new president.

Derek Burleton, the vice president and deputy chief economist of TD Bank Group, said that “finally, the recession appears to be over.” He thinks the U.S. economy will grow by 2.2 or 2.3 percent in 2017. However, that does not account for any federal stimulus the Trump administration has said it intends to provide. He also expects the dollar to remain “on a high perch” through the rest of this year.

Related: Are We Entering the Golden Age of Infrastructure?

In comparison to 2016, the U.S. economy “seems to be getting it together,” Burleton said. It is just looking for some direction.

Yet, without any formal stimulus plan from the President, specific trade policies the administration has in mind, or how many times the Federal Reserve will raise interest rates, the future of 2017 is clouded.

Burleton said infrastructure spending, changes to the corporate tax system and rising inflation rates could be good for the economy. The question is: to what extent are those things going to happen and when? Right now, those things are only “aspirational.” Until legislation is passed, the outlook will not reflect any changes.

“I think, at the end of the day, Trump will be judged not by growth, but did he make the economy stronger?” Burleton said. “They should not be stimulating for the sake of stimulation.”

Federal Reserve officials said it expects to make three quarter-point moves in 2017. Burleton said he expects there will be two rate hikes in 2017.

He also expects crude-oil futures to remain below $60 per barrel into 2018 and the world year-over-year GDP growth to be below 5 percent.

“The fact is, we don’t see a lot of big changes on the global landscape,” he said. “We've got slow economies that are struggling with the ages.”