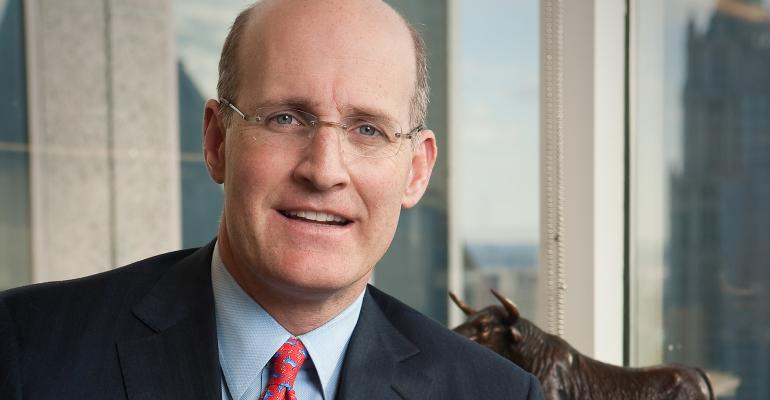 The head of Merrill Lynch now reports directly to Bank of America’s CEO, and thinks future clients will prefer a one-stop-shop for all their financial service needs.

In any contemporary account of the wealth management business, the independent registered investment advisor space is where all the innovation is happening, while legacy players struggle to adapt to the changing demands of clients. Even Wells Fargo Advisors recently announced they were adding to their multichannel wealth management strategy in 2019 and will “test the RIA” waters by offering custodial services to independent RIA firms.

Andy Sieg, the head of Merrill Lynch Wealth Management, tells Wealthmanagement.com that his firm “has no intention of moving in that direction.” Instead, his strategy calls for rallying the resources of his parent company, Bank of America, to create an integrated, one-stop-shop financial services company, offering banking, wealth management and financial planning to clients at all levels of wealth.

After the death of wealth management leader Terrence Laughlin in October, Sieg and U.S. Trust head Katy Knox were promoted to fill his spot. Sieg now sits on Bank of America’s management team and reports directly to CEO Brian Moynihan.

He says he sees Merrill Lynch moving toward a far more integrated approach to banking and wealth management as barriers fall between his division and the parent company; the goal, he says, is to deliver a one-stop-shop of financial services for all clients, from banking to investment management to financial planning.

“We watch, of course, the industry dynamics very closely, but our conviction is this integrated strategy is very powerful,” Sieg said.

Merrill Lynch is part of the bank’s Global Wealth and Investment Management, or GWIM, group that also includes U.S Trust. The group reported record client balances of over $2.8 trillion in the third quarter.

Some critics suggest wealth management integrations with banks only leads to cross-selling more products and services, regardless of the client’s interests.

Sieg disagrees with that notion that integrating wealth management and banking services only incentivizes the cross-selling of proprietary products. He says clients want an integrated financial services relationship, and in his view Bank of America/Merrill Lynch is in the best position to deliver that.

To be sure, Bank of America and GWIM have much to gain from sharing customers. Out of the roughly 7 million affluent households (those with between $250,000 and $1 million in investable assets) that have some existing relationship with Back of America, only 6 percent have investments with Merrill Lynch, according to the bank.

It estimates that if each of the potential 6.6 million households had $375,000 and chose to invest with Merrill Lynch, rather than competitors, that would translate to about $2.5 trillion in new assets. The pool of potential assets from high-net-worth clients of Bank of America (those with more than $1 million) is even greater—an additional $3.9 trillion.

There’s upside for the bank, too. GWIM clients have approximately $200 billion in deposit balances outside of Bank of America, and most don’t have a mortgage or credit card with the bank.

Clients, especially members of younger generations, are more receptive to a single institution managing their financial life, according to Sieg. “Nine in 10 Americans say they want an advisor to look at their total financial situation and take it into account when providing advice,” he told attendees at the Barclays Financial Services Conference this fall.

It's true in other industries as well, he points out. Grocery store chains have their own pharmacies. Even Facebook has expanded its services beyond social networking to include its own messaging app, online marketplace and payment features.

Having one’s financial life with a single company they trust is a relief for customers who are pressed for time and put a premium on that convenience, Sieg said.

“I think, for many of our clients and customers, they're just beginning to recognize how easy this can be, and how much time they can save, and how much better they can sleep at night, and now that they're experiencing it, they're asking for more,” he said.

From the time Bank of America agreed to acquire Merrill Lynch in 2008, a deal that Bank of America’s then CEO Kenneth Lewis called “the strategic opportunity of a lifetime,” the intention was to capitalize on sharing business between them. But Sieg said much of that vision only started to be realized last year, partly due to investments in technology to connect siloed business lines.

While the most prominent RIAs tout their investments in technology, the legacy financial institutions obviously have far more firepower. In 2018, Bank of America spent more than $3 billion on new technology initiatives, excluding essential areas, such as security. Some of the $3 billion was earmarked for the brokerage’s fee-based Merrill Lynch One platform, Sieg said.

Earlier this year, Merrill Lynch also added several new features to its mobile app that is looking increasingly like the one offered by Bank of America. Brokerage clients who are also customers of Bank of America now have a spending and budgeting tool, real-time money transfers via Zelle and the ability to track their FICO score in the Merrill Lynch app. They can also access banking statements and documents going back seven years and scan and send documents to their advisor straight from their mobile device.

Kabir Sethi, the head of Digital Wealth Management at Merrill Lynch, said it was a strategic decision to enhance the existing Merrill Lynch app for its brokerage clients, as opposed to folding both platforms into one.

From the banking side, the firm announced that Merrill Edge, its mass-affluent financial planning platform that offers access to “online and advised investing, trading, brokerage and banking services,” will open 600 new investment centers in 2019, both in their bank branches and in new locations, bringing the total to 2,800, and adding 300 new advisors to the 3,700 they already have.

Merrill Lynch is also investing in its three-year training program, which had a total of approximately 3,500 participants in 2018 and plans to grow that number next year. In addition to more recruits in 2019, the brokerage plans to hire 75 new Advisor Development Program managers and division executives in its field organization dedicated specifically to helping trainees, Sieg said. He declined to share the training program’s current attrition rate.

“We think that by investing in additional management bandwidth we can help ensure that everybody who is working hard and understanding the business, that they have a great opportunity to succeed,” Sieg said. “We don't want to have our trainees fail to get as much attention as they deserve.”

Trainees are assigned to one of Merrill Lynch’s roughly 100 market executives across the country, meaning there is roughly 35 trainees per executive. “That’s a pretty big group of new advisors to be in touch with week-to-week in terms of the progress that they’re making,” Sieg said.

Historically, brokerages have thinned or bolstered their ranks of advisors with the ebb and flow of markets, but the transition of client assets to fee-based accounts help mitigate the effects on a firm. But a return of volatility and tapering performance is all the more reason Sieg said the thundering herd is “bullish on advice” and that Merrill Lynch will perform well through those phases.