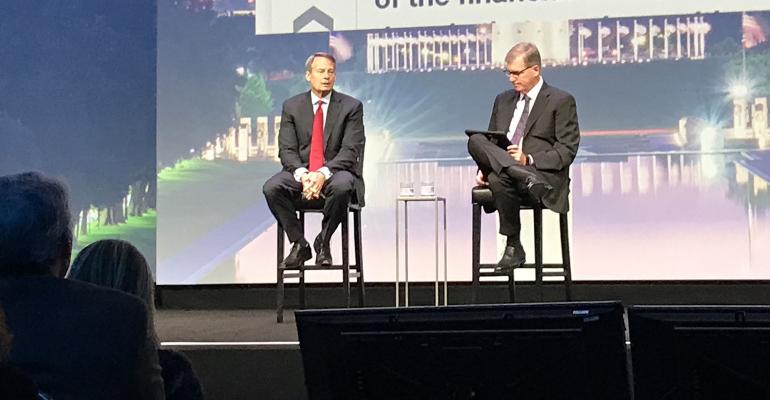 Speaking at the custodian’s annual IMPACT conference, advisors had tough questions for Schwab’s CEO on competing with RIAs, its service challenges and the race to zero on trading commissions.

At the kickoff of the company’s annual advisor conference Monday morning, Charles Schwab executives faced some tough questions from advisors who custody assets with the firm around competition from Schwab’s automated investment advisor offer and what some advisors characterized as the custodian’s declining quality of service.

With a record 5,000 registered investment advisors attending the company’s IMPACT 2018 conference in Washington D.C., Bernie Clark, an executive vice president and head of Schwab Advisor Services, opened up the conference with a keynote emphasizing the value of financial advisors in bringing more sophisticated planning to their clients, and are a particularly needed source of advice as markets start to lose ground, and how Schwab is enabling their efforts.

But when he was joined by Charles Schwab CEO Walt Bettinger for a live question-and-answer session, some anxious advisors took the opportunity to bring up other topics of concern to their practices.

Using the conference app, questions drifted to the top of a list on a screen above the executives. Among them were several questions about Schwab Intelligent Portfolios, the company’s robo advisor, and Schwab Advisory Services, the robo backed by in-house financial planners, and how they’re competing with the independent RIAs the company supports.

“Why are you marketing your own Robo platform (Schwab Intelligent Portfolios) to our RIA investment management clients?” an attendee wrote in a question that gained many votes by other RIAs using the app.

Bettinger defended the service and told attendees that Schwab does “broad-based marketing” that might attract clients from other market segments, but they weren’t competing with the advisors in the room. “Certain parts of the press like to make it a story,” he said.

“The idea that our robo advisors would be a threat to our retail clients is pretty low,” said Bettinger. He said in the last 10 years no advisor has emailed or called him to complain they were competing head-to-head with RIAs, and that includes since the rollout of Schwab Advisor Portfolios. If they did, the retail side of the company would “stand down” and always take the side of the advisor, he said.

Attendees were also curious about the staffing model behind what some characterized as Schwab’s struggle to maintain high service levels to its advisor clients in the wake of strong growth over the past year.

“The explosive growth has impacted your otherwise stellar service teams,” an attendee wrote. “We are feeling your growing pains as your service teams struggle to staff and train people fast enough. We are vested in your success!”

“We have certainly had some service issues this year,” Clark said. “It’s really hard when volume comes. If you have to have more people every time there is a spike in that volume, it’s not sustainable.”

Asked whether the momentum toward commission-free exchange traded funds would continue, Bettinger was quick to point out that “nothing is free” and that if revenue isn’t coming from commissions, it has to come from somewhere else. In those cases, Bettinger said he would like to see more transparency and disclosures so that investors can better understand the funds. Schwab’s ETF OneSource has hundreds of ETFs available commission-free, but Schwab executives have been reluctant to say how far down that path the firm would go.

He also added that some have characterized Schwab Intelligent Portfolios—the firm’s so-called robo portfolio for its own retail clients using, in part, smart beta ETFs—is “free,” but that is incorrect. The service doesn’t charge an advisory fee but clients do pay for the operational expenses, he said.

Still, the pressure on fees for all products and services is real and isn’t letting up, Bettinger said.

The most notable recent news regarding price came in August, when Fidelity Investments announced it was reducing fees on some existing index mutual funds and, more dramatically, eliminating management fees entirely for two new ones.

The executives also briefly addressed questions about third-party technology available to clients, regulation, the age and diversity of the advisor workforce, and the expansion of banking services to better serve ultra-high-net-worth clients.

Although attendees didn’t hold any punches, there was an atmosphere of goodwill in the room and answers from the executives seemed well-received by the advisors.