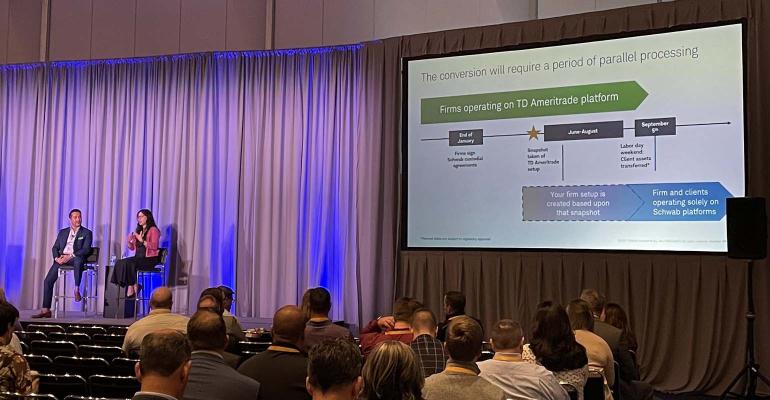 During IMPACT, Schwab outlined a far more detailed time line for advisors to make the transition from TD Ameritrade.

During its IMPACT conference, Schwab executives outlined a far more detailed time line for advisors who will be making the transition from TD Ameritrade than it has shared before.

Last week, Managing Director Tom Bradley said the so-called “conversion day” would take place over Labor Day weekend 2023. By the following Tuesday, he said, all advisors and clients will be on the Schwab platform, and that he expects the TD Ameritrade Institutional name and brand will be permanently retired.

Related: At IMPACT 2022, Schwab Is Asking for Patience and Making Promises

During an IMPACT session, Managing Directors Jessica Heffron and John Tovar gave advisors a road map for what the next few months will look like.

By the end of January, advisors will be asked to sign an Investment Advisor Service Agreement (IASA), assign their Firm Security Administrator (FSA) and should begin their planning process for what is to come during the summer. Upon receipt of the firms’ signed custodial agreements, Schwab will begin the data mapping process for each firm.

And, she noted, the functionality on the platform will be limited during this transitory period.

“It’s like you’re building a house,” said Heffron. “We’re trying to replicate that house on the Schwab side. It’s going to be an active construction site. You can visit it. You can look around. But it’s not up and running. It’s not functional.”

Heffron said Schwab will take a snapshot of advisors’ TD Ameritrade setup at the beginning of June.

“Once we have that snapshot, we’re going to start that build on the Schwab side,” said Heffron.

After that, advisors can explore and learn the Schwab Advisor Center and get to know their Schwab team.

“We’re trying to make this as minimally disruptive as possible,” said Heffron.

Tovar said during the summer months, firms would be able to continue to conduct normal day-to-day business at TD Ameritrade, including trading, moving money and opening accounts.

However, Tovar said firms will need to wind down some operations in preparation for the switch.

Tovar said some essential activities, including trading and moving will be available through the end of business on the Friday before the integration.

Finally, on Sept. 5, 2023, the TD Ameritrade accounts and assets will be transitioned to Schwab’s platform. At this point, the transition will be complete and advisors will be able to begin to explore Schwab's offers and resources.

While Schwab's financial acquisition of TDAI closed in October 2020, Bernie Clark, head of Schwab Advisor Services, acknowledged at a press conference in June 2021 that the full transition and technology transition would likely take the full range of the firm's initial estimate.

“We talked about it being a 30- to 36-month endeavor for us to get to integration,” Clark said. “While we're still on that time line, it will be later toward the spectrum of months. Probably closest to the ending side of the 36."