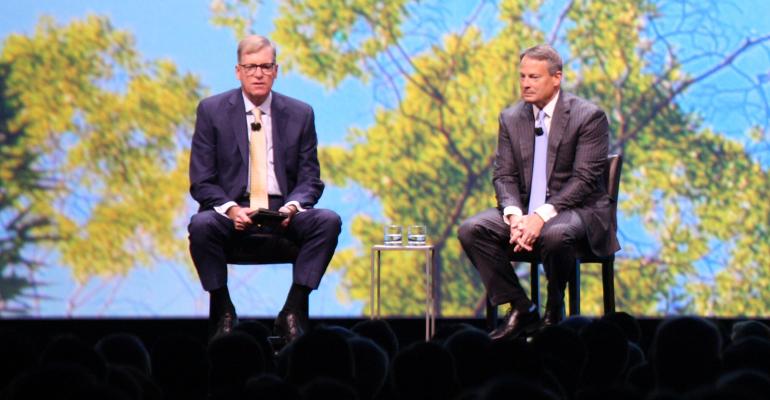 Change is certain. But advisors who control the change and move in the direction that best serves clients are better positioned for the future, says Schwab’s Bernie Clark.

No matter where you sit in the financial services industry, the future is exciting and opportunistic, but it also brings new challenges to financial advisors’ businesses, said Bernie Clark, executive vice president of Schwab Advisor Services. Those challenges are driven by the change we expect to see over the next 10 years. Advisors must get ahead of that change, embrace it and figure out how it impacts their clients, Clark said, speaking at Schwab’s annual IMPACT Conference in Chicago.

Some advisors react to change with their heads in the sand, ignoring it, while others react with anticipatory anxiety. But Clark said most advisors in the room “wear a catcher’s mitt.” They want to control the change, and move in the direction that best serves clients.

What are some of those tectonic changes that will most impact clients? The ascendance of artificial intelligence is one. Some 25 million jobs will be lost to robotics in 10 years, Clark said, referencing a Forrester research report. That’s three times the number of jobs lost in the financial crisis. In the next 10 to 15 years, we’ll be largely a robotic economy. Clark believes we’re not far off from hearing clients say, “Alexa, please open an IRA account for me.”

Walt Bettinger, president and CEO of The Charles Schwab Corp., said we’re in the beginning of the game in terms of leveraging artificial intelligence for portfolio management. Every financial firm will have a digital advice offering, but the key will be finding the balance between technology and people. “Pure technology unabated can create significant problems,” he said. In other words, small coding errors can compound into numerous problems.

Healthcare is another area that’s changing rapidly, Clark added. Advisors’ models will have to change with it. The possibilities include moving to a single payer system, Obamacare getting repealed and replaced, and the inevitable emergence of health savings accounts. Advisors will need to embrace HSAs and figure out how they’ll be utilized.

With these changes, advisors have the opportunity to grow their role with clients. They have the power to help clients navigate it by doubling down on new expertise, Clark said. That expertise may not be in the typical financial markets, but in other areas of clients’ lives. Advisors need to ask different questions and engage clients on social media. A critical part of their role is to push clients in new directions.

One thing that will not change, Clark argued, is the value of independent advice. Independent advisors are better positioned to seize the opportunities of the future.

More traditional firms are trying to act and behave like independent registered investment advisors, Bettinger added. That’s natural in a competitive world. The problem is those firms have structural differences from RIAs.

As far as Morgan Stanley’s recent exit from the protocol, “it was foreseen,” Clark said. “This is an organization that thinks they can lock people down.” Other firms will likely follow, but it could accelerate the move to independence.