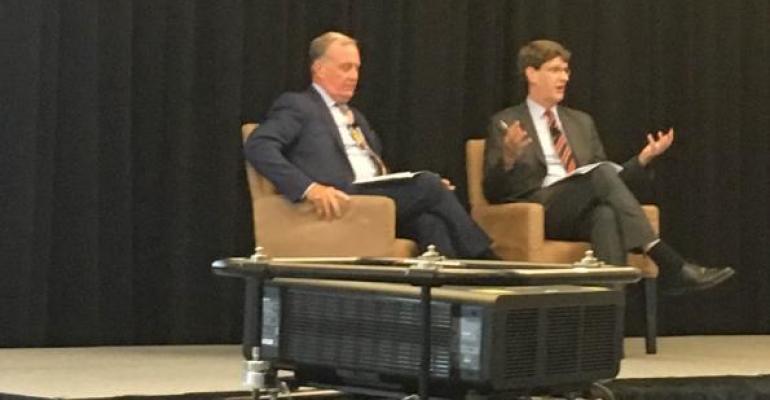 Schwab: FINRA Could Come Back to Haunt RIAs

In 2012, a bill proposed by then–Financial Services Committee Chairman Spencer Bachus (R-Ala.) died out that would have allowed one or more SROs (self-regulatory organizations) to oversee investment advisors. FINRA was gunning for the job. But, “Even bad ideas never die,” said Jeff Brown, senior vice president and head of legislative and regulatory affairs at Charles Schwab, speaking during the custodian’s annual IMPACT conference in San Diego.

The brokerage industry has come out in favor of a uniform fiduciary standard, but not the application of the one currently governing RIAs. But brokerages believe there needs to be a common rulebook for brokers and investment advisors; this could revive the discussion around FINRA oversight of RIAs, Brown said.

If FINRA’s rulebook were applied to RIAs, that would increase advisors’ compliance costs and make their business model less competitive to brokers. That’s why RIAs should keep a close eye on the issue, he warned.

While the RIA industry got Bachus to pull the bill, that didn’t solve the problem of advisor oversight; the Securities and Exchange Commission still only examines about 10 percent of firms a year. Rep. Maxine Waters (D-Calif.) introduced a bill a few years ago that would allow the SEC to collect fees to fund advisor exams, but it didn’t go anywhere.

And recently, the idea of third-party examiners has gained traction. SEC Chair Mary Jo White has come out in support of the idea of compliance reviews for RIAs by third parties to supplement, not replace, exams conducted by the commission.

A rule is currently in draft form, Brown said, but he doesn’t believe it will go through. The issue with it is, “What’s the competency of these examiners? Who will make that judgment?” he asked.

Even if there is a third-party exam rule in 2017, it would be years before it gets implemented, said Michael Townsend, vice president of legislative and regulatory affairs at Schwab. There would be a wait for requests for proposals (RFPs) from possible entities that would do the exams, and then there would have to be a testing and certification process for examiners.

There are other, more imminent regulations that could also impact the RIA channel in the coming year, Townsend and Brown said. The Department of Labor's fiduciary rule, for example, provides a great opportunity for RIAs already operating as fiduciaries. For RIAs, this isn’t new; they’ve always been explicit about what their fees are.

Brown said there will be $100 billion in low account balance IRAs on the move, as well as $200 billion in wirehouse assets. “There’s a lot of money out there that’s going to be moving somewhere,” he said. RIAs can capture some of it.

The Wells Fargo phony account scandal could also have a huge impact on the RIA channel, Brown added.

“Certainly there’s going to be a huge effort in Washington in the coming year on incentive compensation,” he said. “Those incentive comp rules, we all thought, were going to get better than what had originally been proposed. Now with Wells, they’re going to get worse—far worse.”

As a result of these rules, large brokers sitting in the wirehouses are going to be subject to huge clawback provisions and could start to question why they should stay at their firm.

“The migration out of the wirehouses—this will only cause it to grow,” Brown said.