The Indianapolis breakaway acquirer will now fund subacquisitions of its partner firms, taking a minority stake in the acquired firm.

Dickson said the offer is designed to appeal to his 35 partner firms, most of whom are wirehouse veterans and know many partners at firms like Merrill Lynch looking to make similar leaps to an independent firm.

A 20-year Merrill veteran himself, Dickson said all of the major brokerage firms and banks have "retire in place" programs wherein a junior advisor essentially "buys out" a senior advisor, but the "acquiring advisor really doesn't acquire anything.” The bank or brokerage firm owns the business and could reassign any client to someone else or reduce the payout on the account.

"Sanctuary has created an alternative for advisors ... to transition their business to a Sanctuary partner firm rather than someone at their current firm," Dickson said. Sanctuary provides the capital, while the partner firm provides the “sweat equity” in exchange for a majority stake in the newly acquired firm. Each case will be different, but Dickson expects the acquiring partner RIA will own between 55% and 80% of the business, without putting its own equity at risk.

Focus and Hightower always take 100% of the equity in any RIA they take on, whether the latter is a partner or an acquisition by that partner. Emigrant and Merchant both start with minority stakes with each partner, and that doesn't change when the partner takes Emigrant's capital and goes on to buy other RIAs. Only Dynasty Financial Partners and Sanctuary take zero equity in their partners from the outset and, once the partner acquires another RIA, maintain that zero equity position once the partner absorbs the subacquisition, he said.

“Most [partner] firms want to acquire but are not interested in selling any of their equity, so this structure solves for that—a larger partner firm still owns all of their equity but shares in the risk of an acquisition. If the deal is a disaster, the partner is normally the only one on the hook,” Diamond said. “With this new model, Sanctuary shares in the downside risk.”

Diamond said that if the partner firm doing the subacquisition thinks there is upside potential for its target, “they’re better off taking debt financing or self-financing, because they will own all the economics over time as opposed to sharing in the upside potential with an outside partner.”

Mark Bruno, a managing partner at Dan Seivert's Echelon Partners, the Manhattan Beach, Calif., investment bank and consulting firm, said that the Sanctuary program "is an iteration on the growing trend in minority acquisitions. As more sellers consider minority deals, it does create more opportunities for these types of sub-acquisitions."

"This is a savvy move by Sanctuary which enhances their value proposition to RIA sellers," said Dave DeVoe, founder of DeVoe & Co., an investment bank and consulting firm for RIAs in San Francisco.

The majority of RIA sellers for the past two years have chosen to sell primarily to gain scale, he said.

"Many of these advisors seek to stay in the business for five, 10, or more years and are growth-minded," meaning they have a keen eye on becoming acquirers themselves, he said. "The opportunity to join an enterprise that provides M&A expertise and/or capital can be very attractive especially in today's marketplace."

Acquisitions of RIAs by other acquired RIAs—as opposed to aggregators or strategic investors—is an increasingly prevalent trend in RIA M&A. Subacquisitions are typically 30% to 50% smaller than standard RIA transactions, according to DeVoe spokesperson Stacy Orff but are an increasingly important part of the acquisition landscape.

According to DeVoe & Company's most recent data, to be released in a report at the end of the month, there have been nine subacquisitions, or acquisitions made on behalf of RIAs that had themselves already been acquired, so far this year, with an average firm size of $670 million AUM. That constitutes 16% of total RIA M&A transactions year to date. 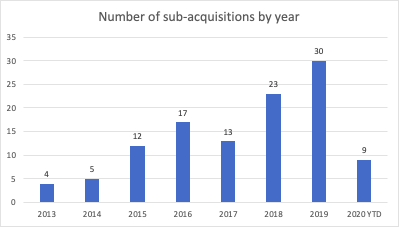 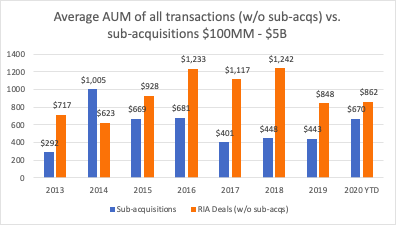 If this were a normal year, that would be on track to meet or surpass the 23 and 30 subacquisition deals for 2018 and 2019, respectively. In 2013, there were only four subacquisitions, according to DeVoe data.

It also differs from the other prevailing model, which is epitomized by Dynasty, which requires its partner firms to take on debt to finance a subacquisition via a term loan, or alternatively provides the partner with a “synthetic equity” option whereby the partner firm agrees to give Dynasty a portion of its and the acquiree’s topline revenues going forward in exchange for the acquisition money.

Harris Baltch, head of Dynasty Capital Strategies in St. Petersburg, Fla., told WealthManagement.com his firm has supported 14 subacquisitions on behalf of partner firms in the past two years using that model.

Dynasty CEO Shirl Penney emphasized that his firm takes zero equity interest in either the acquirer or the subacquirer, but Diamond said Sanctuary still is the only firm willing to surrender upfront capital and cede majority control without making the acquirer take on cumbersome debt or fork over a portion of its future cash flow.

Dickson said that the Sanctuary program is already bearing fruit: It was the clincher in its deal to bring on Muirwood Private Wealth of Walnut Creek, Calif., from Merrill Lynch.

Dickson declined to reveal the size of his war chest but did say that the company was capitalized by “private investors,” including management and some of Sanctuary’s partner firms.

Dickson and Sanctuary Wealth President Vince Fertitta are leading the effort, with the help of head of business development and delivery Michael Longley and one of the company’s managing directors. Dickson said the team is looking to hire an additional five to 10 people to support the team’s effort in the coming months.

“We will open up a lot of eyes and a lot of opportunity for people [at the wirehouses] to say, ‘Hey, listen, if we're going to pay for something, we want to have some ownership,’” Dickson said.