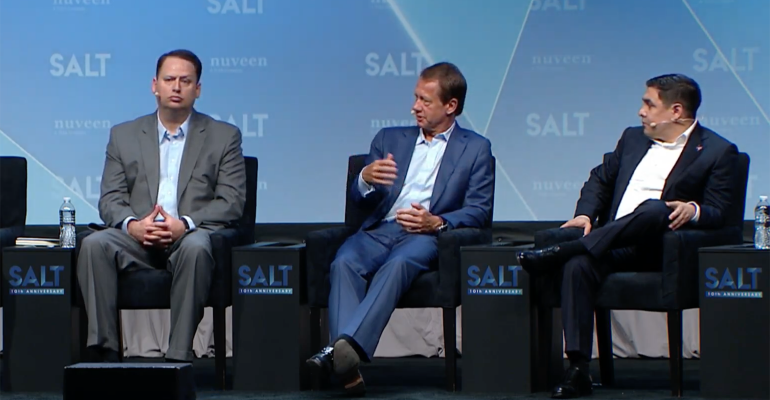 At the SALT Conference: The RIA Market Is Getting Frothy

Speaking on a wealth management panel at Anthony Scaramucci’s SALT Conference, executives pointed to the influx of capital from investors outside of the industry driving up valuations of RIA firms and accelerating the pace of mergers and acquisitions.

The registered investment advisory space has been discovered, with an influx of capital coming from sources outside of the traditional wealth management industry, according to industry executives, speaking at Anthony Scaramucci’s SALT conference in Las Vegas on Wednesday. Sovereign wealth funds, family offices, private equity firms and large, well-funded RIAs are investing in wealth management firms.

Dynasty Financial Partners President and CEO Shirl Penney said the market for RIA firms is getting frothy, with 25 buyers for every seller, and the dynamic is driving valuations higher. The return on assets in this space hasn’t come down much over the past decade, but the cost of service has gone up a bit, putting a slight drag on margins.

“The best funded, scaled firms right now are absolutely in a position to win on a disproportionate basis going forward,” Penney said.

Ryan Morfin, CEO of Wentworth, a holding company that acquires independent broker/dealers, agreed that scale is key to survival. But the reason private equity firms and other buyers are getting into the space is because of the "multiple arbitrage" that can be achieved. Broker/dealers are going for three or four times EBITDA, while some of the big aggregators are valued at 10 to 12 times EBITDA. Most RIAs are selling for around four to five times EBITDA, but at scale, they could command a 15 to 17 times valuation.

“There are tremendous economic opportunities from a private equity standpoint in our space, and I think that’s what’s driving attention from a lot of capital allocators to pick a platform and give them a checkbook,” Morfin said.

That access to capital is helping Wentworth move to a more digital platform, with a goal to become paperless—with all advisor workflows digitized—by 2020. In addition, Morfin’s company made an MLP investment into venture capital fund Work-Bench, a New York-based company that invests in early-stage enterprise startups.

“It’s going to be the folks who can implement and utilize technology faster into their organization that have that outperformance and growth.”

Penney said this influx of capital into wealth management is going to play an important role in helping to fund succession, as many advisors near retirement age.

“There are going to be significant winners that are acquiring some of the smaller-scale RIAs, where people are looking to retire,” he said.