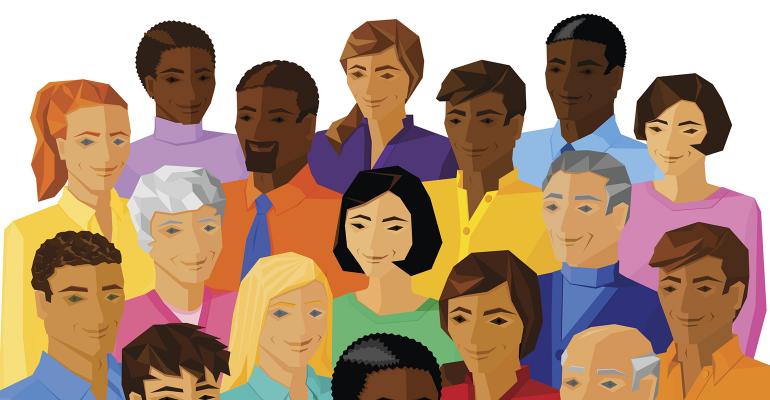 Women and people of color are still grossly underrepresented in the advisory industry compared with the broader population, according to new Cerulli Associates data.

Over the summer, trade groups and companies in the wealth management space were quick to issue public statements in response to the widespread protests over racism that took place across the country, as well as regarding broader issues of inequality that persist across the industry. Some firms used it as an opportunity for deeper introspection, and many firms did take actionable steps—beyond simply writing a check or issuing statements—to address racism in the country and the underrepresentation in this industry.

But new data from Cerulli Associates shows that women and minorities are still grossly underrepresented in the financial advisor space. And while the percentages of these groups are growing, it’s at a very slow pace. At the end of 2019, just 18% of advisors were female, up from 17.2% in 2018 and 15.7% in 2015. Overall, women represent nearly 51% of the American population.

Related: Why Diversity and Inclusion Reaches a Screeching Halt in Wealth Management 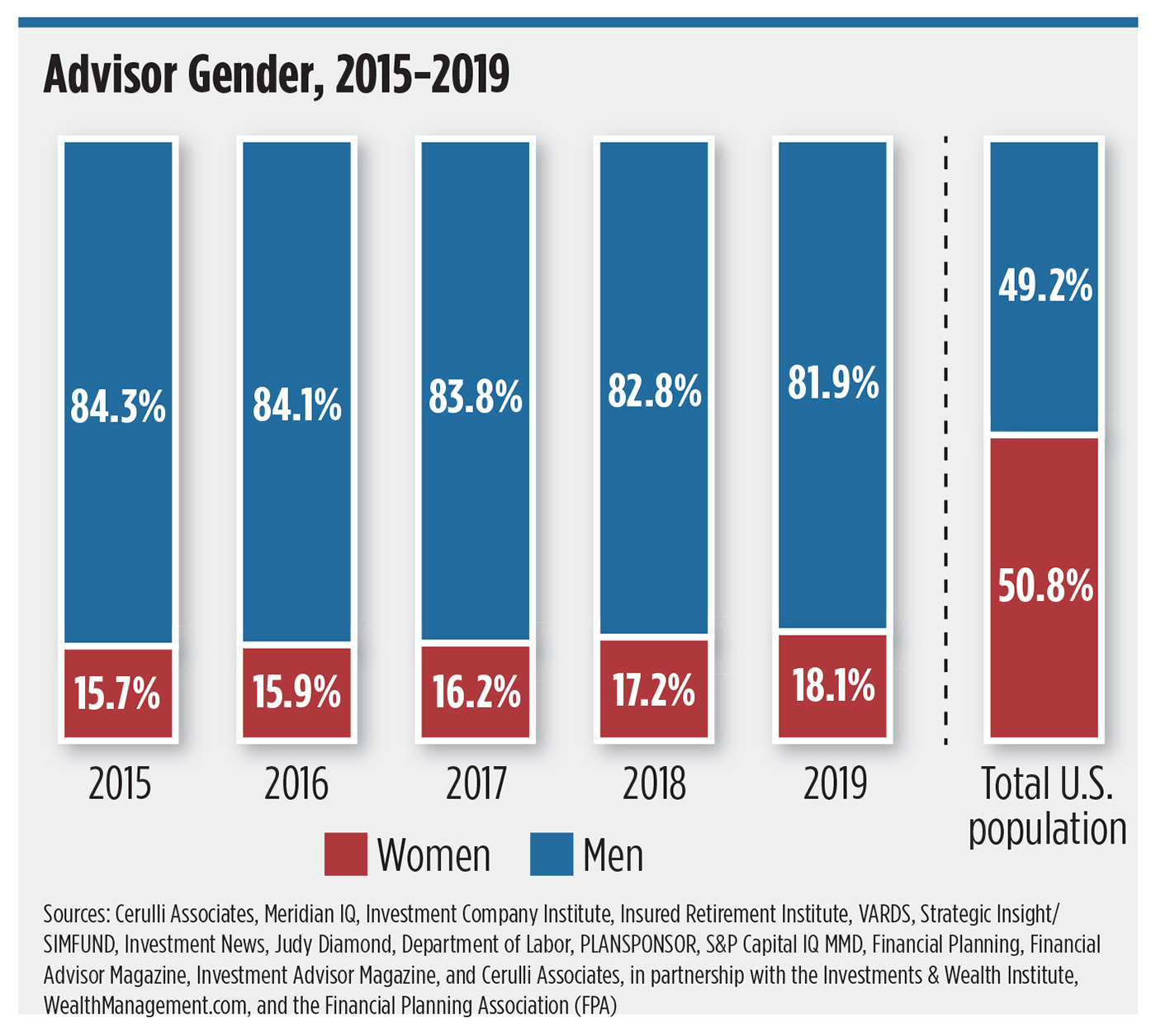 “It’s encouraging to see this indicator of progress,” said Marina Shtyrkov, senior analyst at Cerulli and author of the report. “Although these numbers are not ideally where we would like to see them, we are seeing marginal gains, especially in recent years.”

In addition, just 2.9% of advisors identify as Black or African American, 5.1% as Hispanic or Latino, and 4.3% as Asian, compared with 14.2%, 18.4% and 6.8%, respectively, for the general U.S. population. This is the first year Cerulli has captured this data, so there is no year-over-year trend line.

“While I'm glad to see a small uptick in women advisors, it is frankly too slow,” said Sonya Dreizler, head of the ESG consultancy Solutions With Sonya. “Looking at the race and gender statistics, compared to the racial and gender makeup of our country is truly disheartening. While our industry clings to doing things the way we've always done them, we are missing out on a tremendous amount of talent.”

“The reality is that most firms have an advisor community that is far from diverse,” the Cerulli report said. “Frequently, advisors of color find themselves in workspaces that inherently feel exclusive because of their lack of diversity.”

Kate Healy, former head of Next Gen at TD Ameritrade and current board chair at the Foundation for Financial Planning, said it was good to see the trend lines moving in the right direction. And if you look at the total number of women across the industry—including those in support and operations roles—it is much more promising, 46% in fact, according to the 2019 FA Insight Study of Advisory Firms.

“The reality is 46% of the industry is women,” Healy said. “I feel like we sometimes do ourselves a disservice and we scare women away from the industry because we say it’s only one in five, when really it’s almost half. They’re just not in advisor roles.”

She pointed to women like Shannon Spotswood, president of RFG Advisory, and Heather Fortner, president of SignatureFD, who were likely not counted in the 18% figure.

When diverse candidates were asked what would deter them from entering the industry, 58% of them said a high failure rate was a major factor. Fifty-six percent of these candidates cited unstable compensation as a major factor, 55% indicated the pressure to meet revenue or production goals, and half said it was a lack of familiarity with the profession.

“No other profession requires someone to enter ... and bring on new clients,” Healy said. “We still have the challenges of the larger firms that are not creating the training programs, and they’re just bringing people in and saying ‘Bring a list of names.’ And that’s still happening. The scary part is, then it turns people off from the profession if they think it’s just all sales.”

“Firms have to get better at bringing people on, bringing them into client service, and giving them those rotational programs that are going to get them ready to become the advisor. Especially women and people of color—they need compensation. They need to be stable. They’re not looking for a job where it spikes up and down.”

The good news, Healy said, is that the protests have brought more awareness to the lack of diversity in the industry than ever before. And some firms have really thought about what it means for their firm to create a pipeline of more diverse talent.

But Dreizler says there’s still a lot of work to be done.

“White men have most of the decision making roles in our industry,” she said. “With that power comes the opportunity for proactive leadership. I'd like to see more white men take vocal stands against discrimination, harassment and inequity. And to lead their companies in updating policies and work environments to be safe and inclusive, so that women, people of color, and especially women of color can thrive. Though large-scale change may sound daunting, tapping the entire available talent pool is a worthwhile investment.”

Cerulli analysts said broker/dealers and independent firms should first look at their firms’ own gender and racial diversity, evaluate blind spots, get feedback from diverse advisors and then build an action plan to address the gaps.

“There is no silver bullet; firms need a multi-pronged approach that removes structural barriers, builds talent pipelines into the industry, and fosters a culture where diversity is in the DNA,” the report said. “For diversity to gain a foothold, wealth management firms must embed inclusivity into their culture, as well as rethink their recruiting, training, and retention strategies.”