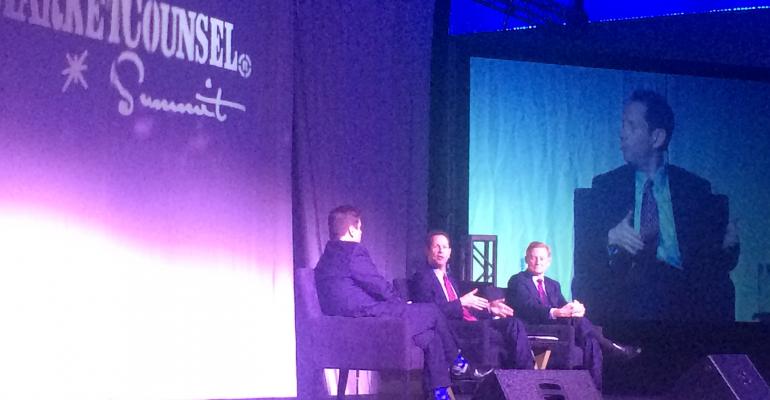 Though the U.S. Department of of Labor’s proposal to regulate brokers advising retirement accounts is looking like an inevitability, it won’t have the intended effect of protecting investors, argued a former Republican congressman and a former top SEC official speaking at MarketCounsel’s annual client summit in Miami on Tuesday.

Former SEC Inspector General H. David Kotz said that the DOL's proposal is likely to pass next year.  The current rider in the budget bill circulating through Congress meant to kill the proposal won’t succeed, he said. “And if it doesn’t … it would not shock me if this comes out.”

But it won’t help, he said. Clients don’t understand the rules, and without providing “clarity and a lack of confusion,” the easy thing to do is put more standards in, he said. That will be more of a burden to advisors than a balm for investors.

Bachus agreed. “In my opinion, the Dept. of Labor has no jurisdiction” over securities regulation, he said. “Happily, the SEC is reasserting itself,” speaking of the commission’s stated goal to coordinate the rules governing brokers and investment advisors in the latter part of next year.

“It’s important for investors to be protected, but I’m not convinced a fiduciary obligation will do any more to do that,” Bachus said. “All the rules and regulations in the world did not stop Bernie Madoff, it did not stop Enron, it did not stop the (financial crisis of) 2008.”

“Regulation doesn’t cure all these things,” Kotz said. The SEC can’t be relied upon to use the current regulations to protect investors. Both brought up the fact that evidence implicating Bernie Madoff in his infamous Ponzi scheme was right under the SEC’s nose, including a whistleblower, as well as existing reports in differing departments that, if coordinated, would have provided a red flag. But it did nothing to stop the fraud.

“You assume the SEC is not doing enough on exams. You’d think some good would come out of it. But the SEC did several exams of Bernie Madoff. They checked the box, but not competently,” Kotz said. “The SEC didn’t miss out on Madoff because of resources, but because of competency.”

Bachus pointed out that the majority of firms running afoul of current regulations didn’t do so because of inappropriate investment advice, but for non-malicious record keeping failures, like not updating ADVs in a timely manner.

“The next war is a war on too many regulations,” Bachus said. “You don’t want to rush into anything. We don’t need any more regulations,” he said.