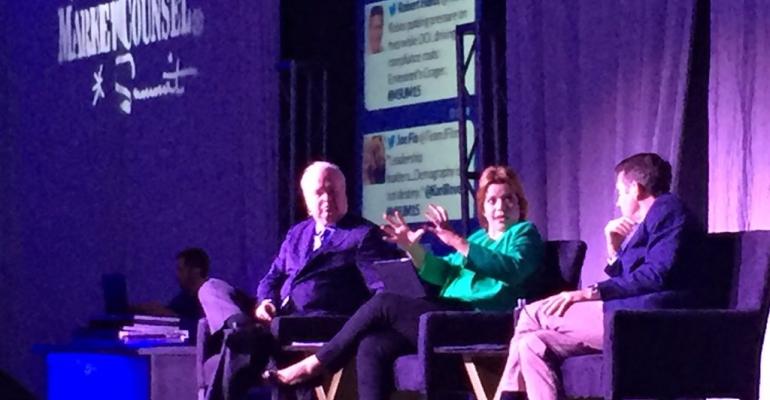 Can advisors learn anything about communication from two masters of political messaging?

David Plouffe was President Barack Obama’s campaign manager and largely credited as one of the architects behind his 2008 election.

During the 2012 election he was inside the White House as an advisor to the president when Obama’s team was looking to exploit a vulnerability of challenger Mitt Romney among Latino voters: The former Massachusetts governor said his stance on illegal immigrants was to make life so difficult for them they would choose to “self-deport.”

The instinct for Plouffe was to hit the issue straight on. But Obama's media team had a different idea: Go hyper-local in battleground states and run ads, in Spanish, of Latino volunteers talking about why they were giving their time to support Obama.

“Why would we do that when we could go right at the issue itself?” Plouffe said during a panel at the MarketCounsel client summit in Miami on Tuesday. “But they were absolutely right. And it worked.”

The lesson for any advisor looking to communicate their value proposition - know exactly who you are targeting with each message you send out, and tailor that message to the audience. “You can’t take stuff you are communicating to one audience, and then bring the same communication to another audience,” Plouffe said. "You need to bring judgment to what it is you’re offering. You can’t translate between audiences.”

While it’s unlikely an advisor’s marketing campaign will have the same vigor that Obama’s team had in terms of data, predictive analytics and real-time feedback, Plouffe said to a deeper dive into the data from polls and surveys was required in order to know what the public was actually thinking.

“It’s a small segment of people taking these polls,” he said, and they often mask important differences among segments of those surveyed. While few advisors can build predictive models from multiple sets of data, a focus on more targeted data may help advisors when crafting their marketing messages.

For his part, former President George W. Bush advisor Karl Rove pointed out that an inaccurate reading of the top-line polls is partially why Donald Trump is getting so much attention as a front runner in the current election cycle, when the reality of a Trump presidency is not even a remote possibility.

“No front runner has ever failed to improve his poll numbers,” Rove said. Trump can’t get above his base, he said. Furthermore, Trump’s negative numbers are far higher than they are for any other candidate, even in his own party. He may win a few states, but the presidency? “It ain’t gonna happen,” Rove said.

Trump’s ascendency, alongside the largely under-the-radar success of Bernie Sanders, is largely reflective of a budding populism movement in the U.S. that has similar causes. “There is a growing concern among people I have met about their own personal circumstances,” Rove said.

“It’s the speed of change and the nature of the change, their role in the economy, and the fragility of what they see around them,” Rove said. “Everyone knows someone who lost a home, lost a job, works harder.  All this ripples through. I don’t think this goes away quickly.”