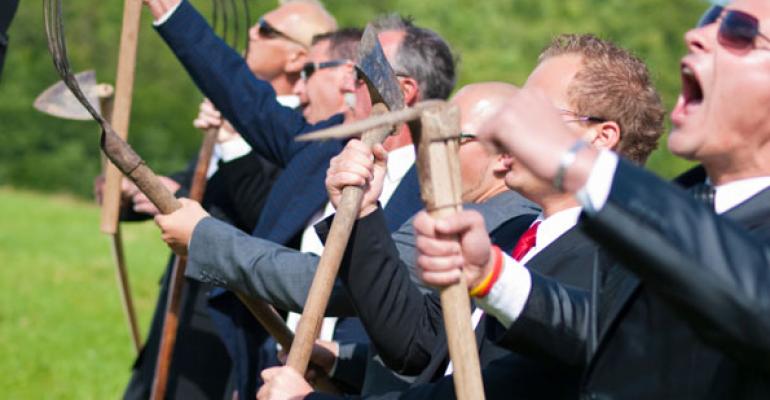 After years of being considered acquisition targets, regional broker/dealers may be making a comeback.

After years of being acquisition targets, many of the major regional broker/dealers seem to be bucking the trend. The largest regional broker/dealers, such as RBC Wealth Management, Janney Montgomery Scott, Baird and Stifel Nicolaus, are getting bigger and stronger, adding advisors and assets, according to new data by Cerulli Associates.

In the years leading up to the financial crisis, many regional broker/dealers were considered acquisition targets, a way wirehouse firms could build out scale. For example, Merrill Lynch acquired Advest in 2005; UBS purchased McDonald Investments and Piper Jaffray in 2006. From 2004 to 2007, the regional channel’s headcount declined from 36,691 to 33,029, Cerulli said.

But since the financial crisis, things are looking up, particularly for the major regional firms. In 2007, regional b/ds held 13 percent of total share of assets under management. That has grown to nearly 15 percent in 2010, and Cerulli projects this to grow to 15.3 percent by 2013.

Those relatively modest numbers downplay the trend, however. Cerulli Analyst Scott Smith believes there’s been a washing out at the bottom - the smaller regional firms have been losing headcount while the growth has been concentrated among the top regional players (see chart). 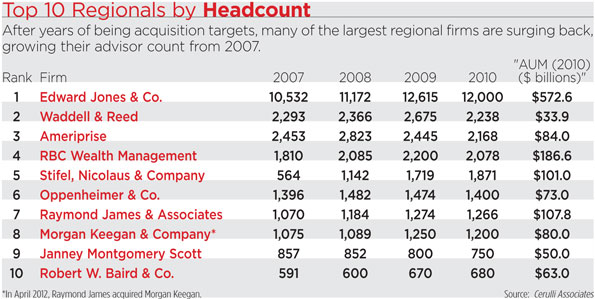 The major regional firms are recruiting a lot of low-end wirehouse advisors, who are finding the culture that they want in the Janneys and RBCs of the world, Smith said.

“Those firms kind of have everything that a wire has, but it seems not to have a lot of the baggage at this point,” Smith said.

Some regional firms have announced big wins from the wirehouses so far this year. In February, Janney Montgomery Scott managed to lure top Merrill Lynch veteran Peter Sargent, a $2.3 million producer with $250 million in assets. In March, the firm also picked up two teamsfrom Morgan Stanley Smith Barney with a total of $380 million in assets. In March, Raymond Jamesrecruited a $200 million father-son team from Morgan Stanley Smith Barney, John Waszolek and his son Eric Waszolek.

Smith would argue that the wirehouse culture has changed to one that is more firm-focused, with an emphasis on cross-selling bank products and higher producers. Meanwhile, regional firms are more advisor-focused, and there’s not as much of a high production focus.

“I think [regional firms have] put advisors first and hoped for the best with profits, if you will, instead of trying to put profits first and making advisors do what they need to get there.”

Also, because most regional firms are much smaller in headcount than a wirehouse firm, they have better access to executives at the firm and can voice their concerns, Smith said.

Chip Roame, managing principal of Tiburon Strategic Advisors, agrees that regional advisors have the ability to be a big fish in a smaller pond. At a regional firm, they also have more control and less pressure to move to fee accounts or to jettison small accounts, he added.

Smith also believes there’s no unified culture at the wirehouses, as many these firms have gone through mergers, including Morgan Stanley Smith Barney, Bank of America/Merrill Lynch and Wells Fargo.

“Turning on a computer and getting to work isn’t so bad either for some people,” Smith said. “They’re getting paid pretty well; they’re not getting forced to do things that they’re not comfortable with. Some of them just don’t want to be at Merrill. RBC makes a better spot for them.” 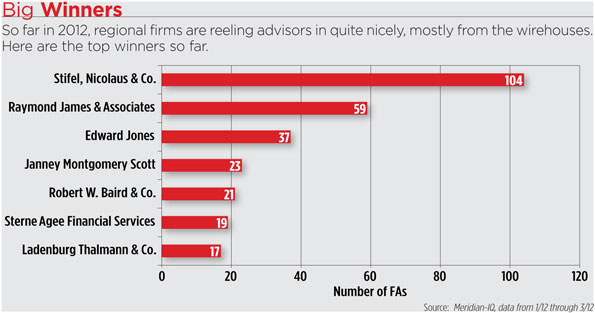