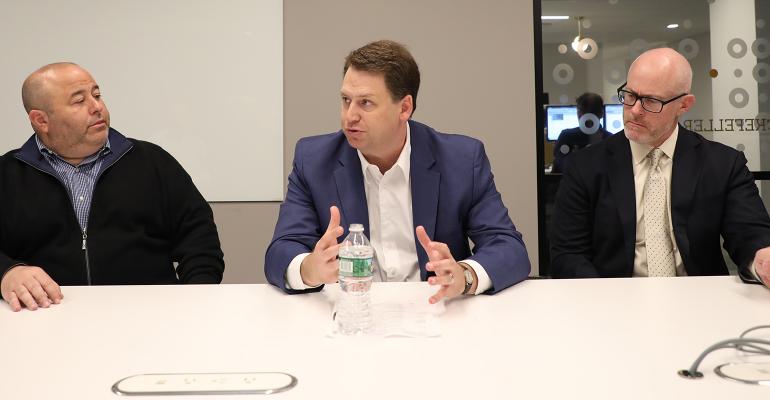 Q&A: The State of Independent Advising in 2019

WealthManagement.com sat down with Tim Oden of Charles Schwab, Shirl Penney of Dynasty Financial Partners and Brian Hamburger of MarketCounsel for a Q&A discussion.

Three players in the independent advisory space, Tim Oden of Charles Schwab, Shirl Penney of Dynasty Financial Partners and Brian Hamburger of MarketCounsel, sat down with the WealthManagement.com editorial team last week for a Q&A on what it means to be independent in 2019.

WealthManagement.com asked the trio how the industry has shifted over the past decade, how any changes have affected their businesses and whether new regulations like Reg BI could come into play in the future.

They also took the idea of "captive independence" to task, claiming that breakaway brokers are being sold a bill of goods when they join these models.

Brian Hamburger is president and CEO of MarketCounsel and founder and managing director of the Hamburger Law Firm.

Shirl Penney is the founder and CEO of Dynasty Financial Partners.

This interview has been condensed and edited for clarity.

Wealth Management: Even five years ago we talked about a billion-dollar registered investment advisor being kind of a rare thing. And now they’re everywhere. Talk a little bit about the changing landscape in terms of the size of these firms and how that has changed your business.

Brian Hamburger: Years ago we kind of dreamt of the proliferation of billion-dollar firms. And they’re happening now; as all roads continue to head to independence, we’ll see more of those. But at the same time, we’re going to see more [firms] that populate the rest of that spectrum. Large firms deal with large firm problems. There’s going to be more conflicts of interest as the firms grow; there’s going to be more legal claims and threats.

Our interest lies in the growth of the independent space. Growth of the space means the success of our business and whether we’re working with firms on the initial launch or we’re working with them on developing a succession plan or preparing for a merger or an acquisition or doing deals with other service providers within the space and protecting them from other threats; we’ve got a wide range of services that we can work on with these firms.

Shirl Penney: Our growth is coming in three ways: organic growth, meaning new clients of the underlying RIAs, because those assets come on our platform; inorganic growth, in that it’s M&A or tuck-in, and that’s great because we provide the capital that funds the M&A; and then new store sales. Our independent RIA business, especially in our DEG group, the Dynasty Enterprise Group, which is at a billion dollars plus, is growing rapidly.

These larger firms, frankly, are great clients for us because they get it. They outsource more to us, they use our capital, which is a great business for us, and they end up being our growth partner on the inorganic side.

WM: For about six or so years it was all about the custodial technology war and each custodian was building out platforms. That was the key question that the breakaways would ask when they first started embarking on their journey. When a group wants to start a firm and comes to you, is that a part of the custodial conversation anymore?

BH: It’s on the list. I mean it’s a check mark to say, ‘We want to see the technology,’ but a little over half the firms will utilize independent technology separate from the custodians as an interface. And I think firms are far more concerned about their custodian’s capabilities and service responsiveness than anything else.

Tim Oden: We don’t have to create technology to enable people to move into independence because there’s a menu of high-quality, very responsive partners that are filling that need. That enables us to be able to step out of that and focus on other core issues that a custodian, we believe, needs to be the primary responder for.

When we’re talking to prospects, less are they worried about: ‘Can I see your technology?’ and more they are asking an intelligent question: ‘Do you connect to all the major providers?’

SP: Look, success breeds more success. And the sale ultimately happens peer-to-peer. So when very successful advisors make that move, other advisors looking to emulate that call them. They’ll talk to us, but they ultimately want to talk to their peers. And what they always say is, ‘You’re not going to believe how much better the technology is.’ And it makes sense, again, speaking both languages when you have to run a legacy technology system that has to work for millions of current accounts; it’s very difficult to rip a Band-Aid off and completely rebuild it.

WM: You were talking about clients being more aware after the fiduciary rule of what the difference between channels is. Is that going to be muddied up with Regulation BI? Soon brokers will be able to say, ‘We operate under the regulation best interest, so best interest is in the title of what I do for you.’

BH: I think that you’re jumping to the assumption that Reg BI is going to continue to move forward. And you may be right.

Many people that support Reg BI have said, ‘You know what? It’s better than nothing.’ And I’m sitting here and saying, well, I’m pretty sure that we can do a lot better than that. I don’t think better than nothing really should be what we aspire to, but that’s what all the supporters will tell you. And I think that the more we talk about these issues, the greater awareness consumers will have. And that’s the force that underlies so much of our progress and the opportunity that lies ahead.