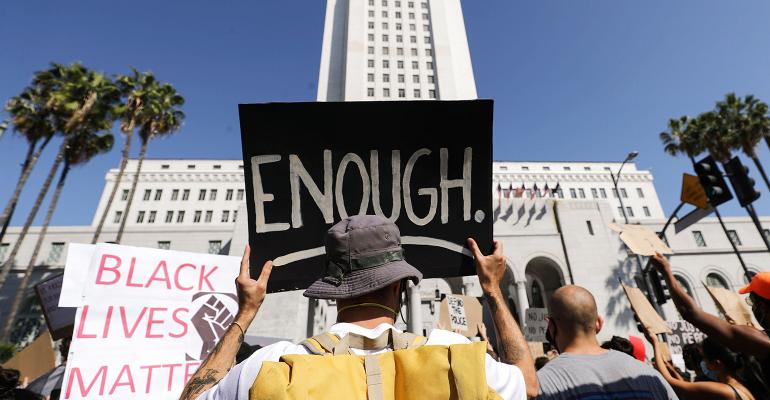 Is Anything Working to Improve Racial Diversity in Wealth Management?

The industry has swiftly issued statements of support for the protesters this week and promises to 'do better' for all. Beyond words, what initiatives in wealth management are actually moving the needle?

Trade groups and companies in the wealth management space have been quick to issue public statements in response to the widespread protests over racism taking place this week, as well as broader issues of endemic inequality that persist across the industry.

All promise to listen to voices less heard, “do better” and work together. Less clear are what tangible, on-the-ground actions these firms will take, and what kind of corporate diversity initiatives actually move the needle toward a more equitable industry—if they can at all.

The protests were sparked last week demanding justice for George Floyd, killed while in police custody. Within days, sympathetic messages flooded out from financial services companies such as Edward Jones, Goldman Sachs, TD Ameritrade, Betterment, Citi, Hightower and others.

Advisor associations such as the Financial Planning Association and the CFP Board also released anti-racism statements and pledged to improve support and recruit advisors from African American and other underrepresented communities in financial services.

These gestures have merit, but will they improve the financial services industry? Many firms and organizations have made similar pledges before, and almost every large firm supporting wealth managers has formalized some kind of diversity and inclusion program, and yet year after year the number of advisors who represent racially diverse backgrounds continues to be low.

Within that, the independent RIA channel, arguably the business model least encumbered by legacy institutions and most open to change, is also the least diverse: The CFP Board and the National Association of Personal Financial Advisors have said—for years—that 3.5% of the 87,000 CFP professionals are black or Latino but had, until recently, refused to break out the numbers in more detail.

“There are some opportunities for us to push for change and there’s some openness to it. But, not on a large enough scale,” said Tyrone Ross, the director of community at Altruist, a wealthtech firm for RIAs.

“There’s not a concerted effort to make sure that people are in positions to expose stories, skill sets, clientele, business models, practice management. There just needs to be more people put into those positions and that’s not happening,” he said.

It’s a slow crawl. What has worked for the industry is exposing a more diverse range of individuals to the careers that are available, according to Reshell Smith, a fee-only financial planner and founder of AMES Financial Solutions in Ocoee, Fla.

Smith worked as a broker for 15 years before striking out as an independent investment advisor.

She said one effort that has made real traction is for financial services professionals to visit and work with historically black colleges and universities (HBCUs) and high schools in underserved communities.

As an example, Smith praises Delaware State University, an HBCU, that has installed a CFP Board of Standards–approved financial planning minor at its business school. Students who complete the track will meet two of the CFP Board’s educations and ethics requirements.

The Association of African American Financial Advisors (Quad-A) has partnered with HBCUs that house financial planning programs such as Clark Atlanta University in Atlanta and Delaware State to connect with the students and the academic programs.

Former stock trader Troy Prince created a pipeline program for low-income black and brown students. Wall Street Bound, as it is called, partners with city colleges to provide technical training; help Wall Street firms recruit talent; bring awareness of different financial services professions, including brokers and investment advisors, to students; and also introduces a kind of “therapy” for the aspiring professionals who need to navigate a corporate culture that may be unfamiliar.

“If you want to be [on Wall Street], you have to speak and act a certain way,” said Prince. “I want to be very intentional about building in therapy and guided work. How does any human manage that journey of peeling off a piece of yourself and putting it back on every day?”

TD Ameritrade is advocating for diversity in the RIA space through its scholarship program. One-third of its 12 $5,000 scholarships for college students are reserved for students from underrepresented backgrounds majoring in financial planning.

Any student who is African American, Latino, Native American, Native Hawaiian, Asian or female can qualify to apply. It announced in 2020 that it is also giving $15,000 grants to HBCUs, Hispanic and other minority-serving institutions with financial planning programs.

Trade associations like Quad-A and the CFP Board also offer scholarships that help more advisors from these diverse backgrounds obtain a CFP designation.

JPMorgan Chase launched the Advancing Black Pathways, an initiative to address the racial wealth gap through education, fellowships and hardship grants, a few years ago.

The firm faced public backlash when The New York Times revealed recorded racist incidents at a few of its branches this past December. A few months later, JPMorgan announced it had hired over 1,000 black students across the country in various positions and that it was growing the program to hire 4,000 more through apprenticeships, internships and post-graduation roles by 2024.

Actionable steps for students leading to entry-level positions in wealth management is one way to solve the long-term imbalances in the industry.

Ross said his goal was to expose more students and young people to the industry, so “more people that look like me get an opportunity.” He’s spoken at schools mostly represented by underserved communities and hosts a podcast and YouTube series that highlights various professionals of diverse racial backgrounds.

But it’s not a quick fix. Keith Beverly, the founder of Grid202 Partners, an impact advisor in the Washington D.C., area, worked with partner Gary Clement, president of Clement Asset Management, on a program a few years ago with a goal to recruit 20 new black CFP designees by the year 2020. They’ve moved eight professionals to get the CFP, with seven more ready to sit for the exam (the CFP Board delayed spring examination dates due to the viral pandemic.)

“It’s a passion project,” Beverly says. “Our goal right now is to just get through the year and we’ll have the data.”