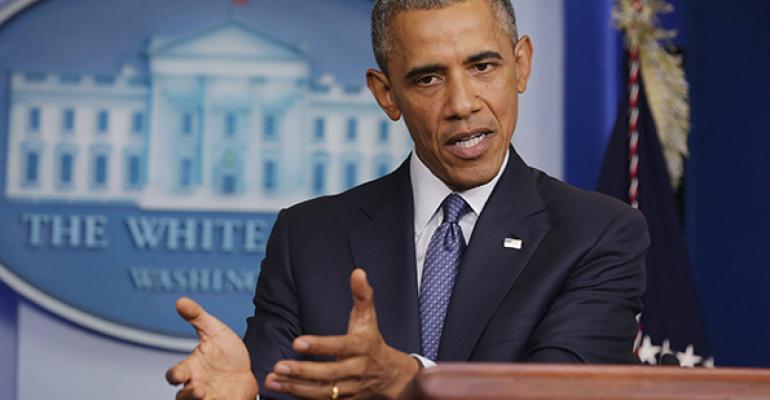 In supporting the Department of Labor’s fiduciary rulemaking, President Barack Obama on Monday called upon advisors to act in the best interests of their clients. But the administration’s approach left investment advisors, who already act as fiduciaries, frustrated by the lack of distinction.

“There are a lot of very fine financial advisors out there, but there are also financial advisors who receive backdoor payments or hidden fees for steering people into bad retirement investments that have high fees and low returns,” Obama said in a speech at AARP headquarters on Monday.

But the rulemaking largely affects brokers, rather than investment advisors, and the President only used the word “broker” once, compared to the 15 direct references to general financial advisors. Additionally, the President’s speech did not contain a single reference to fiduciary duty, despite the fact the DOL’s proposed rule would require advisors overseeing retirement plans to act under a fiduciary standard.

“I’m not quite clear where in that speech real investment advisors were represented and that’s a shame,” said Brian Hamburger, president and CEO of MarketCounsel. “The unfortunate part is the only thing the would-be retirees are going to hear are the President’s comments and with very broad strokes, in that speech, the financial advice industry was not represented at all with regards to investment advisors.”

In addition to the president's speech, the administration and DOL released a series of fact sheets and videos that discuss the issue of conflicts of interest.

“This is not a simple issue and President Obama is trying to treat it as though it is,” says Riverside, Calif.-based advisor Karl Leonard Hicks, adding that financial service providers are being lumped together and generalizations are being made about the profession. “This would be like lumping all health care service providers together (doctors, med techs, home health care nurses, etc.) and then drawing generalization to create rules for the industry,” he said. “That is exactly what is being done in the financial service industry.”

@Megan_Leonhardt @MichaelKitces that video is also very simple black and white. Fees alone can't be the only criteria.

“If only selecting investment managers was as simple and clear cut as DOL portrays,” said Stephen Barnes, head of Pheonix-based Barnes Investment Advisory. “The information is oversimplified to the point that it likely will do as much harm as good,” Barnes added, applauding the intent, but the execution leaves much to be desired.

Instead, if the Obama really wants to help protect consumers, Barnes recommends educating consumers about the differences between an adviser operating as a fiduciary and a broker operating under a suitability standard. “Let the consumers decide with whom they want to work, but give them the tools to make that decision.”

With the industry so rife with confusion and conflicts of interest, another new rule will make little difference on the industry as a whole, said Paul D. Sippil, a retirement plan advisor based in Chicago. “Until the government and industry leaders realize that mandating disclosures to ‘protect’ investors is akin to mandating that people become more intelligent, nothing will change,” he said.

“If the average person isn't capable of performing a simple Google search with the words containing, ‘How to select a financial advisor,’ which would quickly answer the conflicts of interest question, something tells me we have bigger problems that another rule won't solve.”