Tom Bradley talks about the past, present and future. 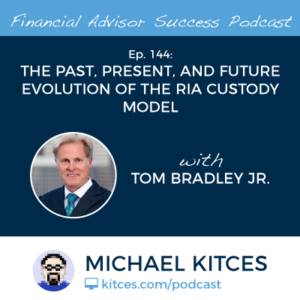 Welcome back to the 144th episode of Financial Advisor Success Podcast!

My guest on today’s podcast is Tom Bradley. Tom is the former president of TD Ameritrade Institutional, one of the leading RIA custodial platforms serving nearly 7,000 independent RIAs with almost $600 billion of assets held in custody.

What’s unique about Tom, though, is that he led the original Waterhouse Advisor Services platform when it was first started back in 1992, and has been a part of the growth and evolution of financial advisors operating as independent RIAs on the custodial platform for more than 25 years.

In this episode, we talk in depth about the evolution of the RIA custody model itself. From the early days when advisors had no direct means to actually trade across multiple client accounts and had to manually enter transactions off paper trade confirmations into their portfolio performance reporting systems, to the development of the first wave of RIA custodial tech integrations when few advisors had more than $20 million of AUM and couldn’t demand much of their providers, to TD Ameritrade’s unique pivot into an open architecture system with its Veo Open Access platform, because their acquisition by Ameritrade in 2006 gave them a unique opportunity to leverage the first wave of APIs that other RIA custodians hadn’t fully developed yet.

We also talk about the nature of the RIA custodial business itself. The not always apparent ways that RIA custodians generate their revenue from advisors and their clients, why the RIA custodial options for how cash is invested has become such a hot-button issue, what it really costs an RIA custodian to service an advisor on average and what clients actually pay as a percentage of their assets, and what it would take to develop an RIA custodial platform that itself operated on a truly fee-only basis.

And be certain to listen to the end, where Tom shares his perspective on the future of the RIA custodial business. The gaps he still sees in how advisory firms manage succession plans and the transition of clients after a founder passes away, and why in the end, the fact that RIA custodians may also compete with their RIAs for end investors in their retail brokerage businesses can still be a net benefit to most advisors because it brings down the cost of the custodial platform in the first place.