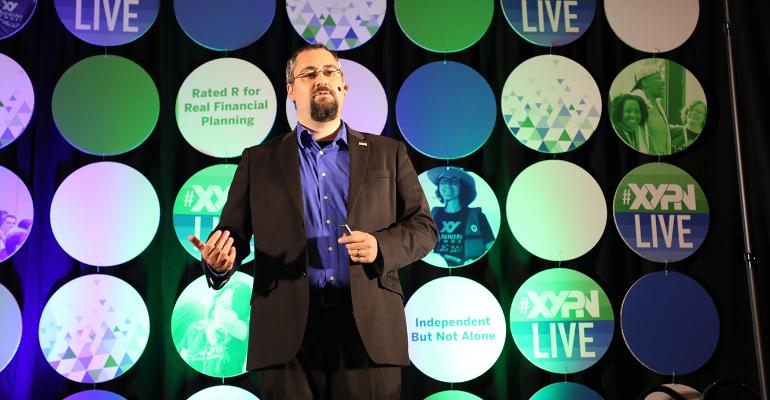 Kitces: Why AI Is Overrated, Insurance And Subscription Pricing

Amid a flurry of activity at XYPN, Michael Kitces explains how Schwab's own moves in turn boosted AdvicePay and why AI is (mostly) useless for advisors.

Earlier this month, XYPN co-founder Michael Kitces sat down with WealthManagement.com to discuss the future of financial planning, how Charles Schwab's subscription-based fees helped out Kitces' and Alan Moore's AdvicePay endeavour and where to find the advice industry's biggest blind spot.

WealthManagement.com: You have a background in insurance. I wanted to start there. What’s going on with insurance making inroads into the advisor’s desktop?

On the one hand, I think we're just sort of seeing the pendulum swinging back a little of saying, ‘Okay, maybe we went a little bit too far in the direction of just focusing on retirement accumulation and decumulation.’ If we're doing these comprehensive financial plans, there is more stuff actually out there that we need to worry about and care about.

WM: Are there any products that are being driven by advisor demand?

MK: When a firm the size of Schwab, with their depth of resources, their depth of market research—when a firm at that size sees monthly subscription fees as a material aspect of its future, it's hard for anybody else not to take note. If someone that big thinks it's the future, there's probably a decent chance it’s going to be the future.

For a firm like Schwab, that got its start in the discount brokerage movement in the 70s, one of the first to join the internet movement in the 90s, originated the OneSource platform, pioneered the Schwab RIA institutional business and really, arguably put robo advising on the map—they weren't the first, but they were the one big firm that pushed it.

They have demonstrated success in so many different eras that I think there's even more attention paid to them when Schwab does a new thing. They actually have a pretty darn good track record of either creating the new thing, or at least being a very fast follower, successfully, in a new thing that's coming.

WM: You said you observed that when Schwab announced its robo advising offering, Wealthfront and Betterment saw significant inflows of funds. With Schwab’s emphasis on subscription fees, do you expect to see something similar in your membership numbers at XYPN, given your organization’s emphasis on fee-only advising?

MK: I'm not sure we will, in quite the same way. The decision to join XYPN for so many advisors is a fundamental shift in their business model or a complete change in their careers. It's just not a decision that people make in a month or two because someone else did a similar thing.

The Schwab announcement is continuing, however, to kind of grease the wheels for people who are thinking about making the leap into a model like this and are now seeing more XYPN growth, more of our members being successful, and large firms doing it and saying maybe this really is the future of where it's going.

The bigger shift that we've seen is a material uptick in enterprise interest and contracts closing in AdvicePay over the past few months, since the Schwab announcement. As much as we talked about Schwab and however many dozen advisors are using that Intelligent Portfolio Premium solution and doing monthly subscription fees, AdvicePay launched its enterprise offering seven months ago and there are over 20,000 advisors under enterprise contract. That number will be up by more than 50% by the end of the year, with just the contracts already in process.

The number of advisors that are in enterprise, signing up for AdvicePay, are already more than 20 times what Schwab brings to the table. The movement toward fee-based advising is actually already much broader than what Schwab does and even what the XY Planning Network does.

WM: To what extent has XYPN benefitted from the bull market? How does that factor into the growth of your organization?

MK: All else being equal, it's likely slowed us. When the market goes up pretty much nonstop for 10 straight years and most of the industry runs an AUM model, there's not really a lot of incentive to go change your business model, because the current one is kind of kicking ass.

Because we're a model that's completely untied to the markets and doesn't benefit from 10 years of a bull market, the fact that everybody else’s fee model benefits from a bull market and ours doesn't means it's probably a headwind to our growth.

Our expectation is that when the next market downturn comes, whenever it does, we'll probably see a significant uptick in growth at XYPN. One, because some advisers always start doubting the AUM model when the bear market comes because it really hurts at the time. And two, some advisors at the margin tend to get cut from firms and broker-dealers when the bear market comes, because their production dips. We expect many of those advisors who don't have homes will probably end up finding a home at XY Planning Network and launching their own firm instead.

WM: Even though advisers may feel more comfortable with risk and with taking the risk of starting their own business in the midst of an expanding economy?

MK: The risk they'll take is to launch their own existing RIA with an AUM fee model. They don’t have a need to change their model and do something different.

In a bear market, fewer people go and launch businesses in the first place, but a whole bunch of people who would've launched AUM businesses aren't going to launch new businesses at all. And if they still want to launch a business, they're going to look for something that's not AUM because they're feeling the pain of a bear market.

WM: What do you see as the most underrated and overrated aspects of the financial advice industry, right now?

MK: The most underrated aspect of financial advice is the shift of products being distributed through technology. That’s everything from BlackRock pushing their ETF models and technology out in various places because iShares ETFs are loaded up in them, that’s Envestnet’s Insurance Exchange.

The whole nature of how financial services products get distributed is now reconfiguring for a fiduciary future. It’s a really big industry-transforming shift and right now I think people are still kind of just looking at the bottom of the first inning. They don’t realize that the whole industry is about to get reconfigured around how product distribution works.

That changes the economics of tons of businesses up and down the line. It changes how products are created. It changes how technology is used. It ripples all over and across the industry.

Human beings are complex around holistic financial advice, and we’re still trying to get AI to tell the difference between cats and cows. We have a long way to go.

The interview has been condensed and edited for clarity.