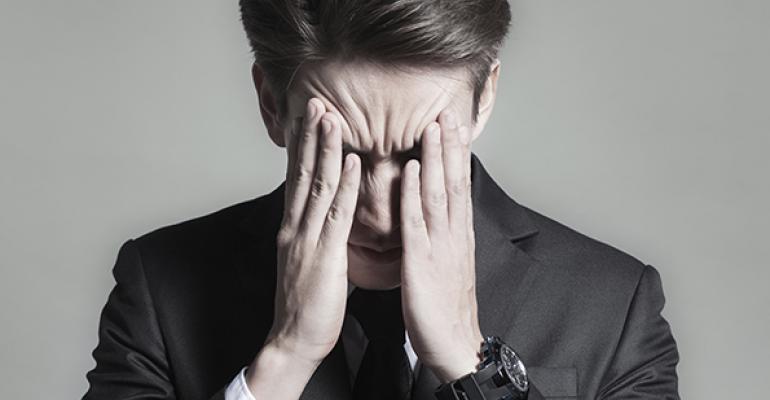 Wirehouse advisors reported lower levels of support and greater levels of business disruption over the last year compared to non-wirehouse and independent advisors, according to a J.D. Power survey.

Advisors at wirehouses felt less support from their home offices and a higher disruption of their business services over the last year compared to their non-wirehouse and independent peers, according to a new study by J.D. Power that gauged advisor satisfaction.

Edward Jones had the highest ranking in overall satisfaction for employee advisors at 890, followed closely by Raymond James & Associates and Stifel at 864 and 857, respectively. (Satisfaction is measured on a scale of 1 to 1,000, with 1,000 being the highest level of satisfaction.) 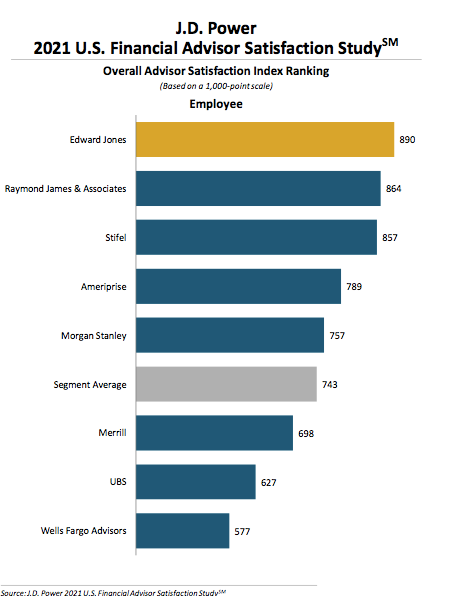 On the independent side, which surveys advisors who register with a broker/dealer but operate as independent contractors, Commonwealth Financial Network held the top spot at 936. Raymond James Financial Services followed behind at 853, while Cambridge Investment Research ranked third with 842. Edward Jones and Commonwealth also held the top spots on the ranking last year.

The study surveyed more than 3,000 employee and independent financial advisors between January and April of this year on six factors, including compensation, leadership and culture, operational support, products and market, professional development and technology.

Overall, advisors found 2020 to be a mixed bag, according to Mike Foy, J.D. Power’s senior director of wealth and lending intelligence. While the industry had recovered from the sharp decline in the markets at the outset of the pandemic by year’s end, advisor satisfaction still suffered in the transition, with three-quarters of all advisors reporting their practice was negatively impacted in some way by the pandemic.

“Probably the biggest challenge in terms of its negative impact on advisor satisfaction with their firm was related to what they perceived to be reduced levels of support from their home office, and we saw a pretty big gap between wirehouse advisors and others,” he said. “So wirehouse firms collectively were more than twice as likely to say they experienced reduced support from home office.”

Survey respondents told J.D. Power that they lacked support related to tech and compliance, and were particularly frustrated by the inability to resolve compliance or client support issues with a ‘single contact’ at their home office. Foy said J.D. Power used the number of contacts and the length of time it took to solve an issue as one measure of support.

“It just adds to the time they’re spending away from client-facing activities,” he said. “And that’s a pain point that we see is an important driver of dissatisfaction in this case.”

According to the study, 34% of wirehouse advisors “reported reduced levels of support” when working out of their homes, with 29% encountering disrupted business services. That’s twice as high as those reported by non-wirehouse and independent advisors, with wirehouse employees also finding it more difficult to make the move into a remote environment.

Morgan Stanley was the only wirehouse to improve significantly on its 2020 satisfaction level; the firm ranked highest among the four wirehouses.

Foy said the gap in satisfaction between wirehouse and non-wirehouse advisors was not new, though the gap had widened in recent years. While not attributable to a single cause, Foy believed advisors perceived that the culture of the non-wirehouse firms was more ‘advisor-centric,’ allowing for more independence and flexibility. He also believed the gaps were due to differences in compensation approaches; wirehouse firms often change their compensation plans frequently, and those plans are often complex and intended to incentivize certain client relationships.

“Generally, the feedback we see from advisors is when it comes to their compensation, obviously they like high payout rates. They also really like simplicity, continuity and flexibility to serve the kinds of clients they want in the way they want,” Foy said. “And they view these continuously changing compensation plans as being both disruptive and an attempt to micromanage their practice.”

J.D. Power found tech and operations support were also among the stickiest issues for advisors, with 35% of survey respondents saying their firm’s tech offerings had improved over the prior year, with only 12% saying their experiences with their firm have been ‘problem-free.’

J.D. Power also looked at the past several years of advisor satisfaction surveys, finding that 18% of those advisors at firms with the lowest satisfaction rates in 2018 had switched firms during that time. By contrast, only 5% of advisors at the highest-rated firms made a switch.

“It quantifies the (return-on-investment) of investing in high advisor satisfaction,” Foy said.