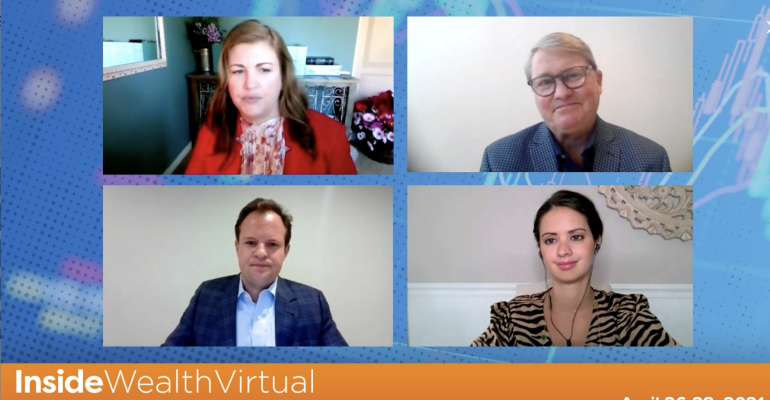 Inside Wealth’s Guide to M&A Options

Mercer Advisors, Dynasty Financial and Journey Strategic Wealth executives shared what RIAs should contemplate before selling their firms, either internally or externally.

Principals of advisory firms know that if they want to monetize their practices, there may be no better time than right now.

The reason? An 11-year bull market has driven valuations for firms into record, and possibly unsustainable, territory; a coming increase in taxation on capital gains makes holding off on a sale risky; and a fiercely competitive market for more valuable, high-net-worth clients is prompting growth-minded firms to broaden their offerings with in-house estate planning, tax preparation and trust services.

For many advisors, it makes more sense to sell to a larger acquirer that can provide that array of services for clients than to try and build it, said Dave Barton, vice chairman of Mercer Advisors, at the Inside Wealth Virtual conference this week.

“Sellers appreciate that on an ex-market basis, they aren’t growing,” he said. After factoring in market appreciation, the industry is maybe growing at 1%, he said. “Even financial planning is table stakes. They need to be more competitive. Do I add services, or join someone who has successfully done it?”

Related: How to Successfully Integrate an Associate Advisor Into Your Practice

Still, many advisors will look internally to a successor to monetize the practice, particularly if they have spent time grooming a junior partner to take over.

Regardless of an owner’s reasons or route to monetization, there are a few things they should immediately consider before starting the process.

“Create a plan and stick to it,” said Harris Baltch, head of mergers and acquisitions and capital strategies at Dynasty Financial Partners. Ideally, a principal has done much of the planning for succession before pulling the trigger.

There’s a series of questions principal advisors should ask themselves, Baltch said. Does your firm have a buy-sell agreement in place? Do you have natural successors in your firm? Do you have to look outward? What is the time horizon?

Another question Baltch suggested is to consider what type of investment, time and resources RIA owners need to put into place to create some type of succession pathway. That could be a distraction, he said, if you’re not only a chief executive officer but also an advisor to a client base.

Penny Phillips, a consultant to advisors who recently launched a $2.6 billion in AUM firm, said her team has observed some of the pain points advisors face with internal succession planning, not the least of which is knowing how to train and develop second- and third-generation talent to take over.

“For decades we’ve told advisors you’ve got to be the CEO; to not just have all the technical competencies to be a practitioner [and] to keep in line with how the industry is changing and how the consumer is changing, but now we’re asking them to be an expert on psychographics and to develop and train gen two and gen three,” said Phillips.

Even when senior advisors do train up a second and third generation, there’s still the reality that those advisors will not be exactly what was envisioned.

For example, an advisor who grew up in a “participation trophy sales culture” is not going to, as Phillips put it, “make it rain” the same way a senior advisor managed to do so 40 years ago. It’s not solely the advisor culture that’s changed, but it’s also the changing consumer landscape that’s transforming how consumers want to be interacted with.

Phillips suggested that leaders create learning or development paths unique to the individual junior advisor and institutionalize client acquisition beyond the senior advisor.

Some of the matters that aren’t discussed when it comes to selling a business are the emotional and psychological taxes on the team. Phillips said advisors are giving up control even if monetization isn’t involved and they’re also spending a portion of their time translating the coming events associated with the sale from industry jargon to something clients can understand and trust.

“Along the process you will get that feeling of excitement. Always ground yourself in ‘Is this the outcome I wanted the client to achieve,’ ‘has something changed about what the client is experiencing,’ and ‘am I still tied to my noble purpose,’” said Phillips.

“We give awards to recognize the most mergers and acquisitions,” she said, “We don’t give awards for the best client experience.”