/sites/all/themes/penton_subtheme_wealthmanagement/images/logos/footer.png
Recent
Recent
Hybrid Work Was Supposed to Create the Best of Two Worlds. It’s Turning Out to be a Challenge for Office Tenants
May 25, 2022
Eight Must Reads for the CRE Industry Today (May 26, 2022)
May 25, 2022
Cresset and Meristem Merge to Create $27B AUM Multi-Family Office
May 25, 2022
Know the Rules: State Residency and Taxation for Individuals, Trusts, and Estates
May 25, 2022
Featured
The 10 Best and 10 Worst States in Which to Retire in 2021
Jul 15, 2021
Poll: 15 Classic Books on Investing and the Markets
Apr 03, 2020
Fifteen Must-Listen Business Podcasts for Advisors
Aug 14, 2020
Celebrity Estates: Jay Leno and Planning for Classic Car Collections
Feb 22, 2022
Bloomberg
brought to you by 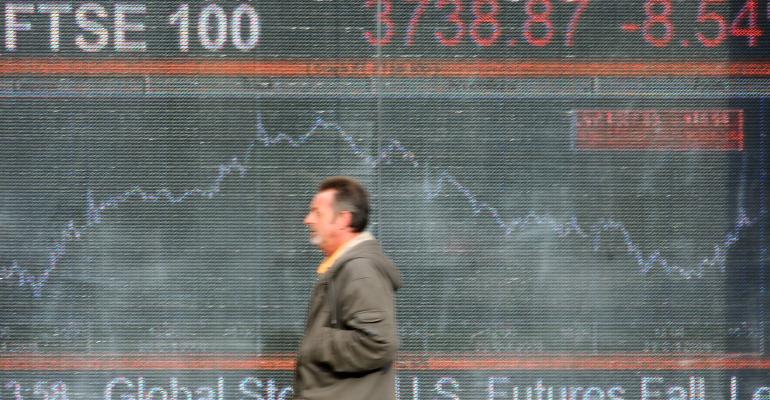 In a market increasingly characterized by passive investing, the index players can direct billions of dollars of investment flows by reclassifying a single country or company.

In September 2015, Peru’s then-finance minister abruptly changed his plans and hopped on a jet to New York. By the time ­Alonso Segura Vasi landed in the U.S., officials from the country’s central bank and ­securities regulator were also en route to join him.

What prompted a bevy of Peruvian officials to make the eight-hour journey wasn’t a matter of urgent statecraft or diplomacy. Instead, it was a rumor that the financial company MSCI Inc. might oust the South American country from its widely followed emerging-markets index, a prospect that Vasi knew required ­immediate intervention.

“Peru is not a name for the frontier market,” says Vasi, who’s now the finance director at Pontifical Catholic University of Peru. While he says that Peru has a small presence in the ­emerging-markets index, reclassifying it as a frontier market—turf occupied by Vietnam, Croatia, and Kenya, among others—would have created an unfortunate imbalance. “It would have been more than a fifth of the index,” he says.

Something else that might be described as imbalanced: the growing clout of index providers such as MSCI, FTSE Russell, and S&P Dow Jones Indices. In a market increasingly characterized by passive investing, these players can direct billions of dollars of investment flows by reclassifying a single country or company, effectively redrawing the borders of markets, shaping the norms of what’s considered acceptable in international finance, and occasionally upsetting the travel plans of government ministers. (Bloomberg LP, the parent company of Bloomberg News, owns the Bloomberg Barclays-branded bond indexes, the most widely followed measure of fixed-income performance worldwide.)

Benchmark indexes trace their history to the late 1800s, when Charles Dow, co-founder of Dow Jones & Co., created the first as a way to gauge the general direction of the market (and to sell newspapers). Today the number of benchmarks outnumbers that of individual stocks. “The problem is that a lot of investors assume that the benchmarks are almost God-given and that they’re ­problem-free. Most of the time they’re not,” says Mohamed ­El-Erian, chief economic adviser at Allianz SE and a Bloomberg View contributor. “It’s a crucial issue. And it’s becoming even more important as more and more people migrate to passive products.”

In the realm of emerging markets, the power of index providers has been on display in recent months with prominent and sometimes controversial reclassifications involving countries such as China, Argentina, and Venezuela. Yet even as the influence of these companies swells, there are those who would seek to unseat them—including some passive fund managers.

Not many remember that the modern borders of Kuwait were created by a British colonialist named Percy Cox as a way of placating an ambitious Saudi Arabia, whose eponymous ruler, Ibn Saud, wanted to expand his own territories. Almost a century later, there’s a “Kuwait problem” of a different sort—frontier-market investors wanting less Kuwait in a widely followed index. The tiny Gulf state accounts for almost 19 percent of the MSCI Frontier Markets Index, typically used by investors willing to stomach risk in exchange for rapid growth. Kuwait, with a population of 4 million and gross domestic product expansion in the low single digits, arguably doesn’t fit the bill.

“Frontier investors would like more frontier stuff in the index and less Kuwait,” says Andrew Howell, strategist at Citigroup Inc. “They want more of countries like Bangladesh or Vietnam, large populations with lots of development potential.”

The Kuwait problem is emblematic of the disagreements that can erupt in an area of finance that prides itself on its objectivity. Index providers say their decisions to include or exclude certain stocks, bonds, or countries are rules-based, driven by impartial analysis of the size, liquidity, and overall “investability” of respective markets. “When we build an index, we want to make sure that it is representative of the opportunities that can be invested in,” says Chin Ping Chia, MSCI’s head of Asia-Pacific research. “Think of us as a mirror that reflects the various needs of investors and also to facilitate that communication process.”

The worry, however, is that passive investing effectively ­passes the proverbial buck. These decisions can be especially noteworthy in emerging markets, where index providers must weigh the desires of investors hoping for early exposure to growth with the realities of underdeveloped capital markets. And for every Argentina—which made it back into JPMorgan Chase & Co.’s bond index earlier this year, despite a history of serial defaults—there’s a poster child of another sort. The moral quandaries of financing the Venezuelan government, for instance, recently exploded into the public consciousness, with critics deriding the inclusion of the country’s debt in various indexes.

Making those decisions has become big business. Passive vehicles, especially cheap exchange-traded funds, rake in an average $3 billion per day. Every passive fund must replicate and track an index—it wouldn’t be passive otherwise—then pay license fees to third-party index providers, boosting the influence of the companies as well as their bottom lines. Index revenue at S&P Global, MSCI, and FTSE Russell surpassed $1 billion in the six months through June, up from $858 million the year before.

“We’re not activists,” says Mark Makepeace, head of FTSE Russell, which this year banned companies that don’t give shareholders enough voting rights from joining its gauges. “We’re setting the minimum standards that investors generally will accept, and our role is to build consensus amongst that investor community as to what that minimum standard should be.” FTSE Russell upgraded Kuwait to its own emerging-markets stock index in September, a move that’s expected to spur as much as $822 million of inflows.

Michael Buek who works within Vanguard Group Inc.’s vast equity indexing group, has watched MSCI wrestle with whether to include mainland Chinese shares in its key emerging-markets benchmark. Buek says he wasn’t surprised that the country remained excluded in 2014, 2015, and 2016. “I knew based on the trading costs and investability it would take longer,” he says.

MSCI finally unveiled plans to slowly add China’s domestic shares to its emerging-markets index last June. Of course, some investors want greater exposure—and faster. Others are still wondering why a market that remains marked by capital controls and restrictions on foreign investors has been included at all.

Yet few decisions by index providers catch Buek by surprise. While he and other passive industry players are working increasingly closely with the third parties to form benchmarks, Buek says the “hypercompetition” among providers means that if Vanguard doesn’t like your index, there are plenty of others to choose from. (For its part, Vanguard parted ways with MSCI in 2012.)

Another option has become increasingly tempting for ETF providers as they try to cut costs and escape the third-party stronghold: self-indexing. In October, State Street Global Advisors ditched FTSE Russell indexes for three of its SPDR products, opting to build propriety equity indexes instead. While the move sent ripples through the market, it also meant that State Street, freed from licensing fees, was able to slash prices on the funds to as low as 3 basis points, making them some of the cheapest such products available. In the race to lower charges for investors, eliminating payments made to third-party index providers may ultimately prove the last step toward reaching the holy grail of zero percent fees.

“I look at self-indexing as just another tool or opportunity when we evaluate new funds or changes to funds,” says Noel Archard, head of global product at State Street’s SPDR ETF business. “I view it as a future option, but it’s not something where we’re thinking, Yep, everything is going self-indexing or, There’s going to be no third party.”

Despite the pressure to lower fees, ambivalence about the future of self-indexing can be found at most of the largest ETF providers. They’ve spent decades working with third parties such as S&P Global, forging the success of passive investing alongside one another. BlackRock, State Street, and Vanguard, which together control more than 80 percent of ETF assets, all have said that they don’t have any plans to convert completely—or even predominantly—to in-house indexes.

“One of our close partners is MSCI,” says Mark Wiedman, global head of iShares and index investments at BlackRock Inc. “Often it’ll be MSCI that brings us to a client. In that case, they’ve delivered huge value to us, and their client tends to think in MSCI terms.”

But even if self-indexing fails to make much of an immediate dent in the dominance of major benchmark index providers, another threat looms in Europe. Benchmark regulation will subject the decisions of index providers to supervision and “added controls,” according to the European Securities and Markets Authority. It’s unclear what that might mean for self-indexing funds, which are striking out on their own just as regulators are taking an interest in third-party providers. But already there’s a hint of tension. “In Europe, we’re all about to be regulated. Self-indexing has not been called out directly, but a lot of the regulations in Europe are around eliminating conflicts of interests,” says Alex Matturri, chief executive officer of S&P Dow Jones Indices. “The idea of self-indexing is contrary to the concept of independence.”

More controversial decisions by index providers are nearing, including the potential inclusion of Saudi Arabia’s stock market in the MSCI Emerging Markets Index as early as next year. If included, the kingdom would essentially leapfrog frontier-market status and head straight into the bigger and broader ­emerging-markets bucket, enjoying an estimated $4 billion of flows from new investors along the way. China’s domestic bonds are also up for inclusion in major indexes run by companies such as JPMorgan.

In the meantime, market participants will mull just what the growing number of indexes, and the expanding sway of their providers, really means—especially when there’s a sense of unease that markets at record highs are being driven by investors chasing inflows rather than fundamentals.

“People often say, what would happen if the world were all index? My great-grandchildren will face that question,” says BlackRock’s Wiedman. Like many managers of passive funds, he argues that too much indexed money will self-correct as active managers find more opportunities to outperform.

Peru might feel differently. After government officials personally showcased the country’s planned market reforms, MSCI demurred from downgrading it to a frontier market. According to former Finance Minister Vasi, it was a narrow miss that would have generated cataclysmic outflows based on “incomplete information” of Peru’s plans.

“You couldn’t take a chance,” Vasi says of his run-in with index providers. “Investors’ decisions to invest in the market are significantly guided by their decisions, whether they put you in the index or do not put you in the index. They do control the fates of companies’ and countries’ access to capital markets.”