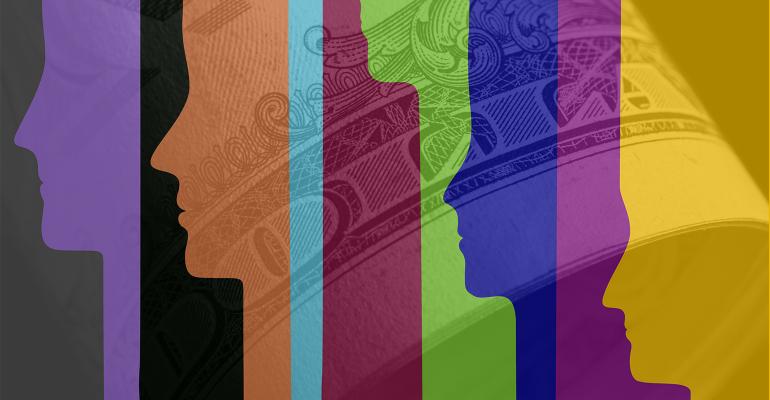 BIPOC- and women-owned firms manage just 1.3% of assets. Advisors are in a position to help change that number.

Concerned about the lack of diversity in the asset management industry, Timothy Yee, a financial advisor, was delighted late last year when he learned about a unique pledge developed by a group of financial services professionals. Called the “Due Diligence 2.0 Commitment,” it called for advisors and others to rethink the way they vetted asset managers to make it possible to choose more fund managers owned by Black, indigenous and people of color and women.

He was happy to become one of the document’s 33 signatories. “How can you understand and solve issues impacting the BIPOC community unless you have a deeply rooted grasp of the issues? And who is more likely to have that grasp, someone from that community or an outsider?” says Yee, whose Green Retirement, an Alameda, Calif., firm with around $250 million in assets, works with retirement plans and a small group of individual clients.

With that in mind, a tiny vanguard of advisors is on the front line, trying to make a change. In some cases that involves seeking out funds run by diverse managers; in others, it means trying to revamp the way advisors evaluate managers and pressuring the asset managers they already work with to step up diversity in their ranks.

Of course, for these advisors, it isn’t just a moral issue. Multiple studies show that more diverse asset management teams produce better results. “Pushing for gender and racial diversity is the right thing to do, but there’s a direct correlation in terms of performance,” says Yee. “This isn’t about diversity for the sake of diversity.”

Plus, clients want it, and not just among high-net-worth and institutional investors. “Clients from every segment we serve are asking about this,” says Anna Snider, head of due diligence at Merrill Lynch and Bank of America Private Bank. “Demand is off the charts.”

For advisors looking for BIPOC and women-owned managers, and who have access to the platform, one avenue is Envestnet's new search filter. Introduced last summer, it allows advisors to search for “minority/women-owned asset managers,” defining that as funds that are at least 50% owned by women, or with at least 25% Black, Hispanic or Native American ownership. “Advisors have been asking for this,” says Co-Chief Investment Officer Dana D’Auria.

Yee suggests a different approach. About half of the funds he uses are categorized as socially responsible, and, while he can’t provide numbers, he suspects that a healthy portion of those are women- or BIPOC-run.

For advisors who don’t believe giving equal access to minority fund managers has to fall under the rubric of “socially responsible investing”—as opposed to BIPOC managers of traditional core investment portfolios—he recommends searching online for BIPOC and women-run asset managers, then screening them through an analytics service like Fi360 and, finally, evaluating whether they’re an appropriate fit.

“Once you have a list of funds, you still have to ask yourself whether this is right for the client,” he says.

Keith Beverly, the managing partner of GRID 202 Partners, a three-year-old Black- and women-owned advisory firm in Washington, D.C., says that about 30% of the funds he uses are BIPOC and women-run. Finding those asset managers has been easier for him than it might be for advisors who aren’t Black, however, since he and his colleagues can tap their existing network.

GRID also has its own racial equity-focused investment strategy, which determines its asset allocation based on company scores from women of color.

For some advisors, the key to supporting more diverse asset managers is to address the vetting process used to select funds. Their argument is that the usual due diligence process excludes many diverse firms from consideration.

“Despite many conversations among managers and advisors, money hasn’t moved,” says Brent Kessel, CEO of Los Angeles–based Abacus Wealth Partners, which has about $3.6 billion in assets. “And the main reason is that the questions we were asking in the due diligence process were exclusionary to a disproportionate percentage of diverse managers.”

That’s why he and three other colleagues, including asset managers and racial equity investing advocates, in consultation with more than a dozen other managers, introduced the Due Diligence 2.0 Commitment in December. The document, signed by financial advisory firms, foundations and investment funds, lays out nine steps aimed at creating a more level playing field for BIPOC managers and a financially prudent way for investors to start allocating more capital to them.

One key recommendation is to change the assets that need to be under management before firms consider a manager. Many advisory firms require at least $200 million AUM, using that as a sign of financial stability. The alternative suggestion is to evaluate factors like AUM growth in previous positions. Another area is a firm’s track record. A traditional due diligence process typically requires a three-year history, but it’s a tough nut to crack for an emerging manager. That’s especially true because people of color tend to lack the inherited wealth or networks of many white men, so tend to take longer to build assets. The suggestion is to use managers’ past experience, domain expertise and prior track records in related work, instead.

Another approach is to review the diverse composition of funds advisors are already using and exert what influence they can to up their game. It’s not an easy process. Merrill Lynch, for example, recently started evaluating the results of its first annual assessment of around 500 asset managers, analyzing investment teams plus the overall organization. The initial findings are meant to provide a starting point for assessing progress down the line. If there’s not sufficient improvement, Merrill will let managers know. “We will tell managers if they’re on what is, in effect, a watch list,” says Snider.

But even Merrill has encountered stumbling blocks, according to Snider. While the assessment has thus far revealed that most firms have diversity policies and the right committees in place, the data regarding investment team representation has been a lot muddier.

Advisory firms with less muscle than Merrill Lynch are also trying to collect data on their asset managers. At Abacus, Kessel and his colleagues have approached about two-thirds of their managers for the gender and ethnic diversity breakdown of their portfolio management teams, so they have a baseline. “I don’t see us setting a quota,” says Kessel. “I just want to see it move in the right direction.”

Kessel hopes that pressure from his RIA, which has a reputation for cutting-edge policies, will motivate more asset managers to get serious about diversity. “There’s a signaling value,” he says. “It could get them thinking, they’re probably going to be getting a lot more questions like this from clients, so they’d better start paying more attention.”