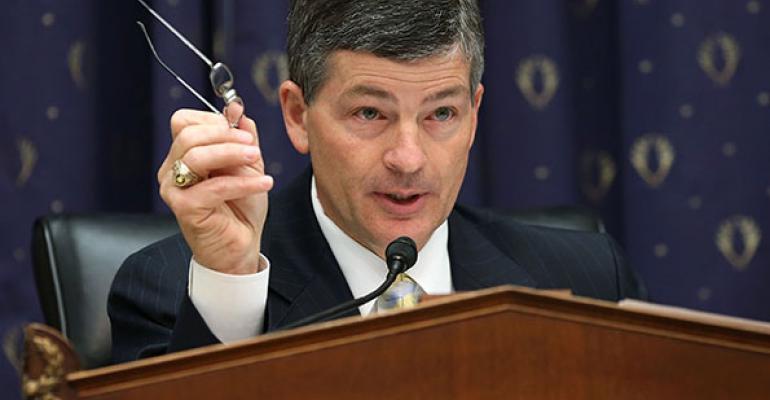 Potential Trump Treasury Secretary has a plan to dismantle Dodd-Frank.

(Bloomberg) --With some in the finance industry salivating over the prospect of deregulation under Donald Trump, a key power broker is emerging who might bring headaches for Wall Street.

House Financial Services Committee Chairman Jeb Hensarling has already been rumored as a potential Treasury Secretary under Trump and he’s got a plan at his fingertips for ripping up and replacing the Dodd-Frank Act. The Texas congressman -- who met with the president-elect at Trump Tower Thursday -- has said he’s been in constant discussion with Trump’s transition team about his proposed legislation, which many lobbyists expect to be the starting point for rewriting bank rules in a Republican-controlled government.

There are a lot of things Wall Street likes in Hensarling’s bill. It scraps the Volcker Rule ban on lenders making speculative market bets with their own capital. It reins in the Consumer Financial Protection Bureau, which has boosted oversight of everything from mortgage lending to credit cards. It eliminates a Dodd-Frank provision that set limits on how much banks can charge retailers when merchants accept debit cards. Asset managers and insurers in particular like his plans to overhaul the Financial Stability Oversight Council, a collection of regulators with authority to impose punitive rules on companies by labeling them systemically important financial institutions.

But passing Hensarling’s bill wouldn’t necessarily free large banks from the handcuffs Washington put on them after the financial crisis, unless lenders want to take the unappealing step of raising hundreds of billions of dollars in new capital. The Republican also has a strong populist streak, has been perceived by Wall Street as unyielding on policy positions and almost always colors his criticism of Dodd-Frank as a failed attempt to do away with too-big-to-fail banks. That mirrors the message that Trump himself championed during his campaign when he called for breaking up the biggest banks and reining in Wall Street’s influence in politics.

“Wall Street has long believed Hensarling is their obstacle to getting reasonable compromise,” said Mark Calabria, a financial regulation expert at the Cato Institute think tank. “There’s a perception that he’s an ideologue who won’t compromise. When bankers go into meet with him, they feel like they are getting a lecture.”

After meeting with Trump Thursday, Hensarling told reporters in New York that he is very excited to help the incoming president “drain the swamp” in Washington and get the economy “working for Americans again.” While Hensarling has a great position leading the financial services panel, he said he would certainly consider a different role if Trump asks.

Lobbyists and their clients rely on the fact that when a bill is introduced, they will get ample opportunity to promote the aspects of it they like and attack the elements they don’t. But bankers can’t assume they will have an open dialogue with Hensarling or that he’s even that interested in hearing from them at all.

For instance, before unveiling the full text of his bill to replace Dodd-Frank in June, his office summoned more than two dozen lobbyists to a private gathering on Capitol Hill to lay out some rules of engagement, according to attendees. Hensarling’s staff scheduled the meeting after lobbyists complained they weren’t being consulted on legislation that would have huge implications for financial firms.

Hensarling quickly got to the point: He indicated he didn’t care whether the industry supported everything in his bill, because he was going to introduce it regardless. The lawmaker then left to catch a plane. Hensarling’s staff took over the discussion, explaining that they only planned to meet with trade groups to get feedback, rather than engaging with representatives from individual firms. specific companies were told, though, that they could send letters on the legislation to Hensarling’s office, said the attendees who asked not to be named because they weren’t authorized to speak publicly.

A spokeswoman for Hensarling declined to comment on the meeting.

The gathering served as a stark reminder of the frosty relationship Hensarling sometimes has with New York mega-banks, some of the attendees said. His staff often boasts he’s not a friend of Wall Street and doesn’t seek their buy-in on policy, people familiar with the comments say.

But after Trump’s surprise win and Republicans keeping control of Congress, banks know Hensarling will play a key role in determining whether the industry accomplishes its top goals on Capitol Hill. That’s true whether he joins the new president’s cabinet or continues to lead the main House panel that deals with oversight of banks and their regulators.

Hensarling said this week that his staff is working to update his bill. Legislation on financial rules will likely be handled in the Senate by Mike Crapo, who’s expected to be the new chairman of the Senate Banking Committee. Crapo, an Idaho Republican, has previously supported a variety of measures to alter Dodd-Frank.

The House Financial Services Committee is “interested in working on a 2.0 version,” Hensarling said of his bill Wednesday at the Exchequer Club in Washington. “Advice and counsel is welcome.”

Hensarling has more connections than most lawmakers to the Washington-neophyte Trump. He’s a close confidant of Vice President-elect Mike Pence, even appearing with him on campaign stops over the past few months. A longtime staffer on Hensarling’s committee is helping to shape financial services policy for the Trump transition team. Other aides to Hensarling are working with or connected to Trump’s inner circle, including the lawmaker’s staff director, who is married to Trump’s top lawyer.

While Trump’s transition team put out a statement last week pledging to dismantle Dodd-Frank, it hasn’t laid out a plan on what it would do instead. That leaves a void that Hensarling’s Financial Choice Act could fill. Still, few lobbyists anticipate a total repeal of Dodd-Frank, which banks have spent years and millions of dollars complying with. Because of filibuster rules, Congress probably can’t pass legislation without the votes of at least some Democrats in the Senate. That means changes will be easier to negotiate than a total overhaul.

During his Wednesday speech, Hensarling acknowledged the hurdles posed by Senate procedures and said he’s prepared to work with Democrats on a compromise.

A key plank of his Choice Act is that it frees banks from a litany of rules if they boost their leverage ratios -- a figure meant to show how safe a lender is by measuring the amount of equity capital it has in relation to total assets. In theory, the higher the ratio, the bigger the buffer for losses before a bank goes bust.

Hensarling’s bill demands that banks have a leverage ratio of at least 10 percent to qualify for regulatory relief. For comparison, Citigroup’s leverage ratio was 7.4 percent at the end of the third quarter. When Hensarling first released details on his legislation in June, he predicted the biggest Wall Street firms combined could have to raise “several hundred billion dollars in new equity” if they wanted to be exempt from regulations.

For a big bank that declines Hensarling’s offer, they’d probably be stuck with a whole slew of burdensome requirements, including post-crisis regulations on capital and liquidity, and annual stress tests conducted by the Federal Reserve meant to determine whether lenders can weather a severe economic downturn.

“It’s a slippery slope,” said Cato’s Calabria, who previously worked as a Republican staff member on the Senate Banking Committee. Once lenders make the decision to opt out of rules, they’ve “legitimized the argument that banks should have higher capital requirements,” he said.