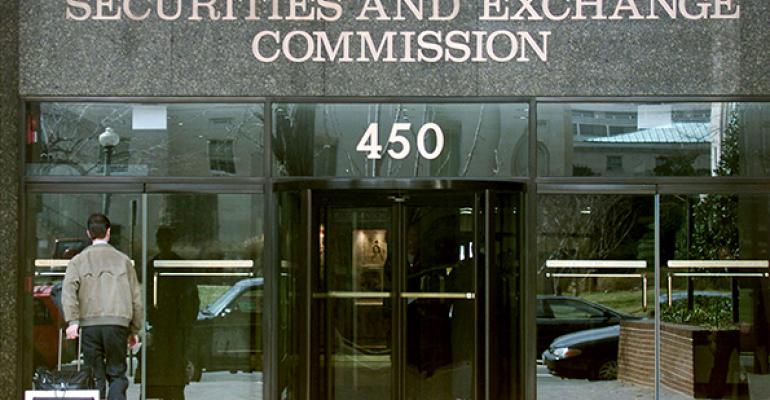 Groups such as the Heritage Action for America, FreedomWorks, Americans for Tax Reform and the National Black Chamber of Commerce call the SEC's proposal an "expensive 'solution'" to a "potentially non-existent 'problem.'"

A coalition of free-market advocates is throwing heat against a Securities and Exchange Commission proposal that would require broker/dealers and advisors to “qualify” investors before allowing them to invest in a certain class of mutual or exchange traded funds that use derivatives to amplify returns.

The proposed SEC rule “represents a very intrusive, burdensome, expansive and expensive ‘solution’ to a poorly defined and potentially non-existent ‘problem,’” according to a public letter the coalition sent to the SEC. “Not only do these rules clash with the Trump administration’s goal of freeing the economy with less red tape, they would foster further inequality in financial markets by potentially making certain mutual funds and exchange traded funds unavailable to the average American investor.”

Last November, the SEC reproposed several changes to its policy on mutual funds and ETFs that use derivatives to amplify the returns of a given index, sometimes by as much as three times the daily return, or create funds that yield a positive return when a given index falls in value, so-called “inverse” funds.

The funds are complicated investment products, and their creators agree they should not be used as traditional buy and hold investments; rather, they are designed for relatively sophisticated investors who understand the risks involved—when a market turns, an ETF that promises three times the return of a specific index can drop faster than many may anticipate.

Yet the ease with which retail investors, and their unwary advisors, can put money into these types of funds has long made regulators uncomfortable. In past years, investors who claim to have not understood the risks involved have taken to the courts when the investments went against them. A leveraged ETF provider, ProShares, has been sued twice, once in 2009 and another time in 2019, by investors claiming they were not aware of the funds’ unique risks.

But members of the free markets coalition asking the SEC to reconsider its position—including 60 Plus Association, Campaign for Liberty, Heritage Action for America, FreedomWorks, Americans for Tax Reform, Competitive Enterprise Institute, Shareholder Advocacy Forum, National Taxpayers Union and the National Black Chamber of Commerce—say making the hurdle higher for investors who want the funds is an unnecessary burden.

The group is asking the SEC to consider whether the recently passed Regulation Best Interest rule for advisors—due to go into effect in June—adequately addresses their concerns. The funds are specifically addressed in the REG BI rules.

ProShares made similar claims to the coalition in its petition letter and went as far as asking its shareholders to write to the commission explaining yes, they are capable of understanding leveraged and inverse funds and that the expanded approval process was unnecessary. ProShare’s competitor Direxion has yet to comment on the proposal publicly.

The group claims the costs of the rules would exceed the benefits. According to the SEC, funds would have to institute a risk management program. One-time costs of installing the risk management program per fund are estimated to be $70,000 to $500,000. Ongoing costs could range from $45,000 to $375,000, estimates the SEC Division of Economic and Risk Analysis (DERA).

The coalition also said the proposed changes put brokers in a “paternalistic” role with their clients. Brokers would have to acquire a significant amount of client information to screen for approval. The coalition says clients would have to provide information and supporting documents regarding employment status, annual income, estimated net worth and so forth. The coalition fears there’s a possible unintended result where brokers would stop offering the products to clients. It would subsequently reduce the number of investment vehicle options to investors. And in ProShare’s case, it would lessen the demand for leveraged funds.

The North American Securities Administrators Association (NASAA), representing state securities regulators, argued recently that broker/dealers needed to do more to ensure the suitability of these investments for the investors they serve.

NASAA told Wealthmanagement.com last August that registered reps who do not fully understand these products pose a great risk to investors.

However, it also reported that in the past three years there were no customer complaints about leveraged funds among the 72% of b/ds that allow clients to hold them in their derivatives-based portfolios.