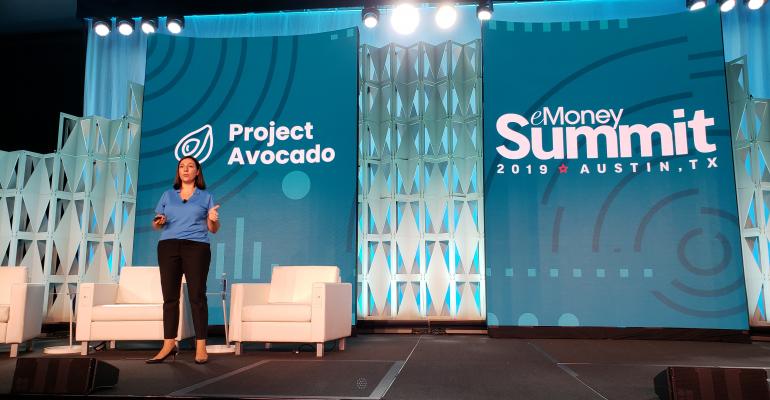 eMoney is looking for new ways to engage clients and millennials in financial planning. Its approach isn't without risk.

eMoney Advisor is placing a big bet on the future of “self-guided” financial planning, linking the firm’s retirement plan footprint with a new mobile application, currently called “Project Avocado.” Introduced at the eMoney Summit in Austin, Texas, Avocado is a mobile app targeted at retirement plan participants, which will show users their spending habits and challenge them to make behavioral changes.

Avocado has two major consumer-facing aspects, said Jess Liberi, head of product at eMoney. It nudges users into making small behavioral changes, by making users more aware of spending habits, which the firm hopes will add up to more responsible financial behavior over time. It also deconstructs financial planning into an advisor-less app, with the goal of providing a more approachable ladder to financial planning.

What’s in it for advisors? eMoney expects that as users’ situations get more financially complex, they will eventually decide they need a financial advisor. Users will already be engaged in the app via their workplace retirement plan offering, so eMoney could potentially have years of spending data that could easily make its way into a full-blown financial plan, presented to a client by an advisor. Advisors using eMoney, the thinking goes, would have a head start using data collected from Avocado.

“The purpose of Avocado is to really open up a self-guided planning experience,” said Ed O’Brien, CEO at the firm. “It’s a planning-led experience. That makes it unique in the space.”

The plan from a business model perspective is currently for its intended users to gain access to Avocado through his or her workplace retirement plan, said Liberi. Using a workplace retirement plan as an entry point came about because advisors wanted to reach the next generation, millennials, she said. That generation now makes up the largest portion of the workforce, she added.

By pairing it to a retirement plan, eMoney will have data on retirement plan contributions and associated data, like employment history. It won’t have as broad of a user base as an app made available to the general public, however.

Another major question mark is data aggregation. The reliability of data aggregation at eMoney is still a source of advisor complaints, acknowledged Liberi, and data aggregation across the industry still leaves clients and advisors staring at their screens in confusion and frustration from time to time.

Both firms are also focused on marketing to millennials. MyBlocks’ interface looks a lot like the Netflix landing page. Avocado is a reference to millennials’ favorite guilty pleasure: avocado toast, said Liberi. But neither firm wants to limit themselves to millennials as clients—both state that product success relies on making good technology that attracts a broad swath of the general public.

“All generations are looking to engage more digitally,” noted Liberi.

While Avocado was built with retirement advisors “in mind,” there is still room for evolution, she added. “There's a lot of interest from wealth advisors, as well. We want to understand how they can use that alongside other services they offer to engage the next generation, or even to engage clients of theirs that are looking for a more automated experience.”

As vendors continue to blur the lines between major categories of advisor technology, eMoney could even find that advisors develop new ways to use the tool, for marketing or lead generation, for example. For now, the product is not expected to launch until the first half of 2020, said Liberi, and it may not even have the same name. “We would have loved to have come to summit with an official name,” she said, “but we wanted to make sure we pick the right one.”